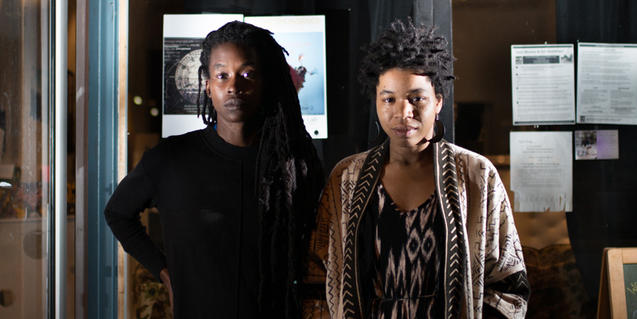 The Black Quantum Futurism collective will carry out a combined artistic residency at CERN in Geneva and Barcelona.

The Collide 2020 jury has announced the winners of the Collide 2020 prize and three honourable mentions. This year's prize has been awarded to Black Quantum Futurism, a multidisciplinary collaboration between the two artists Camae Ayew and Rasheedah Phillips, who will carry out a three-month artist residency at the European Laboratory for Particle Physics (CERN in Geneva) and Hangar, Centre for Visual Arts Production and Research in Barcelona.

Black Quantum Futurism is a multidisciplinary collaboration between the two artists Camae Ayew and Rasheedah Phillips. The duo explores the intersections of futurism, creative media, DIY aesthetics and activism in marginalized communities through an alternative temporal lens. Their work focuses on personal, cultural, familial and community cycles of experience, and their methods of expression range from writing, music, film, visual art and creative research projects. The award will allow Ayew and Phillips to further their research and produce a new artwork based on their proposal entitled CPT Symmetry and violation. The residency is scheduled to take place in the summer of 2021.

Concerning the honourable mentions, they have been awarded to Rosa Barba (Italy, based in Berlin), Tania Candiani (Mexico, based in Mexico City) and Dennis Dizon (Philippines, based in Barcelona). All three will be invited to participate in the Arts at CERN Guest Artist programme, with a short stay at the Lab to investigate ideas that can support their proposals.

Since 2019, the arts programme of the Arts at CERN Lab, Barcelona City Council and the Barcelona Institute of Culture have been working together to foster dialogue between art and science at the highest level. Within this unique collaborative framework, which has a planned duration of three years (2019-2021), arises the international prize Collide.

More information in this web page.