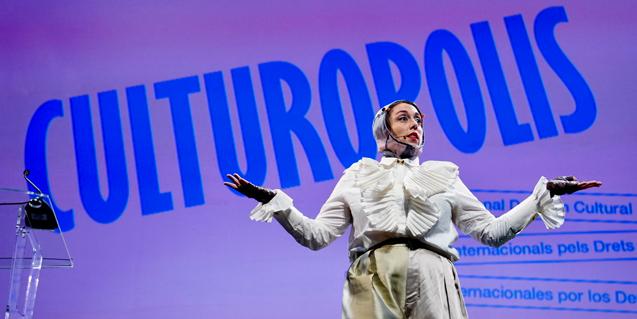 The opening ceremony of CULTUROPOLIS kicked off the four-day debate and reflection on cultural rights.

The Sala Paral-lel 62, formerly Barts, acquired by the City Council and converted into Barcelona's new Casa de Cultura, yesterday hosted the opening ceremony of CULTUROPOLIS, the first International Days for Cultural Rights, which for four days will bring to the city a reflection on aspects such as decent work, access, diversity, participation, and equality in culture. These and many other aspects constitute cultural rights, the object of this meeting that invites us to debate, ask questions, discuss answers, seek solutions, share experiences and points of view until next Saturday.

The opening ceremony featured speeches by political and institutional representatives. It was introduced by the performer Alba Rihe and the actress Gloria Ribera, also facilitators of the presentations of CULTUROPOLIS projects on the 17th and 18th. In their theatrical prologue with a touch of humour, they presented the concept of cultural rights as something abstract, which invites us to reflect, but which is inherent to every person. Both gave way to the evening's presentations.

Jordi Martí, Deputy Mayor for Culture, Education, Science, and Community of the City Council, opened the day by remembering Eduard Miralles and Eduard Delgado for their pioneering concept of acting in culture from a community perspective. Martí recalled that Barcelona, together with Madrid, is the cultural and scientific capital of Spain, but he also stressed that a city can be so "when it is capable of guaranteeing the cultural rights of all its citizens". For this to be the case, he explained, public policies must guarantee equal opportunities, address existing gender, origin and cultural biases, facilitate collective spaces, face the challenges posed by digitalisation and promote decent working conditions in the cultural sector.

In this context, Barcelona's Cultural Rights Plan places municipal public policies in this area and translates them into nine government measures and more than one hundred actions, as explained by Daniel Granados, Barcelona City Council's delegate for Cultural Rights and promoter of this document. A set of actions that involve the whole of society: "public policies are not only made by the public administration, but by the entire cultural fabric". Moreover, if up to now the Plan has focused on guaranteeing the right to access culture, it adds the perspective of contemplating the right to participation, that is, the right to the generation and recognition of all culture, and it does so from two perspectives: the participation of citizens and of the cultural sector.

In order to guarantee cultural rights, we cannot lower our guard. This was stated by Tere Badia, Secretary General of Culture Action Europe, putting it in the context of a pandemic that has increased the precariousness of the sector, at a time of inequalities, with a war like the one in Ukraine, and a global environmental crisis: "we cannot forget the fragility of those rights that we thought we had conquered, but which are still to be defended". According to Badia, "today we find ourselves in a more unjust, unbalanced and scarce situation than the one we had a couple of years ago, and we need courageous debates to help us identify and address the obstacles to change, which is why this conference on cultural rights is particularly relevant".

To advance towards this change, the United Cities and Local Governments network, whose Culture Committee is coordinated by Jordi Pascual, has the mission of linking city, culture, democracy, and development. "We believe that human rights are the framework that guarantees that everyone is involved in the conversation to define our future, also in the cultural sphere”. For Pascual, it is impossible to understand and transform the world without culture being an explicit component, and that is why he posed the question of when we will be able to have an eighteenth SDG dedicated to culture.

The central event of the day was a dialogue in which cultural rights were addressed from global and local perspectives. Moderated by journalist Tania Adam, the conversation was led by the UN Special Rapporteur on Cultural Rights, Alexandra Xanthaki, and the city perspective of the Mayor of Barcelona, Ada Colau. According to Xanthaki, "today we take it for granted that culture is a way of life, and there is not one culture but many, and all of them interact". For the UN rapporteur, the main challenge is the implementation of the right to participate, especially among marginalised collectives and communities, which also implies the recognition of all forms of culture. In the rapporteur's conversation with Colau, it was emphasised that this participation places people at the centre of culture rather than institutions, and that it is precisely diversity (social and cultural) that is the strength for fighting injustice and defending democracy.

The event was rounded off by Joana Dark's fusion of electronic music, projections and traditional Catalan song with a feminist perspective. The recital reflected what was sung about women in the past, as well as what women sang at that time. A look into the past to recover a silenced female culture and to open the doors of an intense CULTUROPOLIS conference that will lead us to reflect on (and also to exercise and celebrate) our cultural rights.