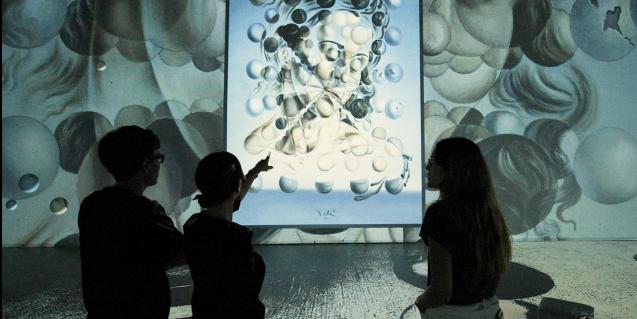 The Ideal is presenting an immersive exhibition of works by the Empordà artist.

It was a given that the works of Salvador Dalí would sooner rather than later take centre stage in one of the exhibitions at the Ideal Centre d'Arts Digitals. The style and dreamlike world of the painter from Figueres fits in perfectly with the concept of this space. The exhibition is called Dalí cibernètic and will open on 20 September. You will have time to take this immersive journey into the mind of the genius until April next year.

Visitors will see the works projected in 360º on a screen covering 1,000 square metres and the possibility of putting on virtual reality goggles and fulfilling what Dalí had possibly already imagined at some point: having the sensation of entering his creations. In the words of the organisers, this immersive journey will allow us to "discover how the genius of his work is the result of an open, ambitious, provocative and scientific way of thinking". For the viewer, it is a "new generation experience of parallel universes, quantum physics, the fourth dimension, sacred geometry and DNA sequencing interpreted by Dalí through his works", according to the Ideal, which has christened it the "Dalinian metaverse". Without a doubt, a new way of looking at such well-known paintings as The Persistence of Memory (the famous work of the melting watches), Galatea of the Spheres or Dematerialisation near Nero's Nose.

The exhibition is a project of Layers of Reality, Minoría Absoluta and Magma Cultura, with the support of the Barcelona City Council and the Generalitat de Catalunya, and has been endorsed by the Gala - Salvador Dalí Foundation. Check this link for more information and to get the tickets.