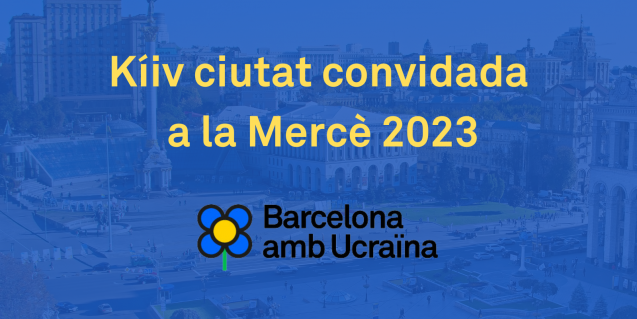 Ukraine's capital has agreed to be the guest city of the city's festival next year.

A culture bridge to face the war: Barcelona has invited the Ukrainian capital, Kyiv, to be the guest city of La Mercè 2023.

The Comissió de Drets Socials, Cultura i Esports unanimously approved, on 19 April, to invite Kyiv as a guest city for the Mercè 23. The invitation has been extended to the mayor of the Ukrainian capital, Vitali Klitschko, who has accepted the proposal.

The Barcelona City Council made the offer to Kyiv's mayor, Vitali Klitschko, for the Ukrainian capital to be the guest city in 2023 some weeks ago. A few days ago, the deputy chairman of Kyiv, Valentyn Mondryivskyy, confirmed, on behalf of his mayor, his gratitude for the offer and his acceptance of the invitation, as he also did live during the Comissió de Cultura.

"Thank you, Barcelona, for your offer. We hope that peace will have come to our country in 2023 and that our festivals can work together," said the deputy chairman of Kyiv for Barcelona's invitation in a live connection during the Comissió de Cultura. "This is the first time we have invited a city at war," admitted Barcelona's sixth deputy mayor, Jordi Martí. "We hope that next year the situation will be different in your country, the war will be over, and your people will once again live in peace," added Martí, who also pointed out that there are already many Ukrainian artists working in Barcelona through residencies in creative factories and other facilities in the city, and also recalled the concerts that have already been held to raise funds to help the Ukrainian victims of the conflict.

Every year since 2007, Barcelona has invited a city with which it shares special ties to its main festival to present its contemporary art scene. The first city was Medellín, last year it was Havana, and this year it will be Rome.