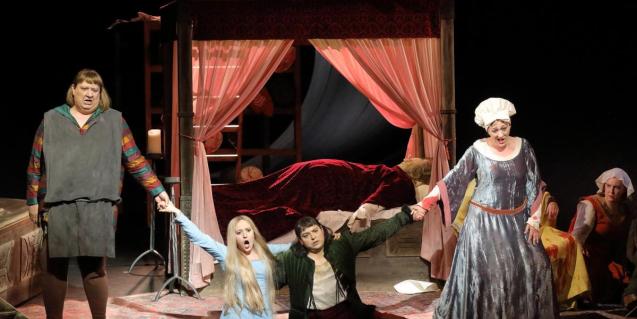 Three seemingly unrelated one-act operas. But they are fragments of one reality. This is Il trittico's proposal, an opera by Puccini which opens at the Gran Teatre del Liceu. The three works are Il tabarro, Suor Angelica and Gianni Schicchi, premiered at the Metropolitan Opera House in New York in 1918.

The staging is not easy, as these three operas belong to three different genres: Il tabarro, a melodrama, Suor Angelica, a lyrical-mystical short opera, and Gianni Schicchi, a farce as macabre as it is funny.

Il tabarro. A barge on the Seine in Paris in 1910. Giorgetta, the young wife of Michele, the owner of the barge, is having an affair with the sailor Luigi. The two lovers arrange a meeting in the evening: she will light a match when Michele has gone to sleep. But a mix-up brings the two men into conflict. Michele fights with Luigi and forces him to confess his love for Giorgetta. Then he kills him.

Suor Angelica. A convent near Siena, at the end of the 17th century. Banished to live in seclusion after giving birth to an illegitimate child, Sister Angelica has not heard from her family for seven years. One day, she receives a visit: it is Angelica's aunt, a princess. She tells her, very coldly, that her son, whom she has not seen since she entered the convent, died two years ago. Angelica, devastated, plans to end her life.

Gianni Schicchi. Florence, 1299. The greedy relatives of the wealthy Buoso Donati discover that the deceased has left his fortune to the church. Young Rinuccio suggests that Gianni Schicchi, a shrewd self-made man and father of his bride, Lauretta, can help them. Together they devise a plan. The relatives call the notary and Schicci, dressed in Buosa's nightgown and cap, dictates from his bed a new will and leaves most of the estate, including the house they are in, to his "dear friend Gianni Schicci".

Tickets for the opera can be purchased at this link.