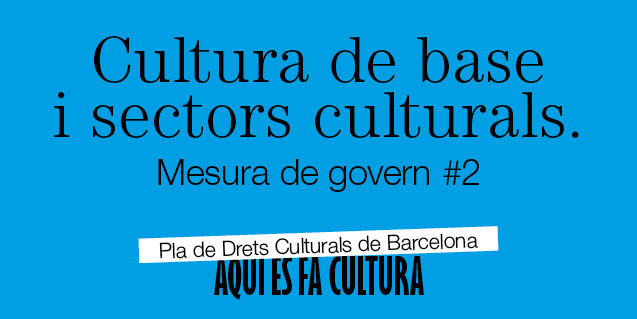 It's part of the Pla de Drets Culturals de Barcelona and includes 13 actions.

As part of the Pla de Drets Culturals de Barcelona, launched last April by the Barcelona City Council, which aims to put cultural rights on par with other fundamental rights, is introducing the second of the nine measures. It has the following phrasing: Grassroots culture and cultural sectors: The right to creation, experimentation, investigation and cultural production. The mission of the second measure is to push the right to creation and cultural production in dignified socio-labour conditions for the cultural workers, try to mitigate structural precariousness, support creative processes, promote new ways of relations between agents, and guarantee access to a wider range of citizenship.

The measure includes the reformulation of the subsidies and grants awarded annually by the City Council, as well as the roll-out of a new programme of grants for creation, implementation of new programmes such as Baixos de Poritecció Oficial Cultural, the holding of the Biennal d'Art Manifesta, the roll-out of the Moneda Cultural REC, the promotion of the Oficina Ciudadana de Cultura, the creation of the Cases de la Cultura de Barcelona, or the expansion of municipal exhibition circuits.

1. Beques Barcelona Crea. The ICUB will unfold a new annual scholarship programme for the creation and innovation of cultural practices.

2. A coordination space and a resource bank of the Fàbriques de Creació. One of the pending challenges of the network of 11 facilities is to achieve greater levels of coordination between the different factories, sharing projects and resources to reach the entire cultural and artistic network of the city and the metropolitan area. This way, this line of action wants to establish a coordination system to move in this direction.

3. A municipal system of creation residencies. The new programme Beques Barcelona Crea will include, starting in 2023, a selection of one project in each category that, in addition to receiving the grant, will participate in a residency programme at one of the city's Fàbriques de Creació.

4. A rewriting of the existing subsidies and grants. The changes in the cultural dimension and the demands for modifications and improvements that the different sectors and agents have been demanding for some time made it necessary to review the bases, the models of calls for proposals, the categorisations and the application and justification systems.

5. Social clauses in culture. The action includes the creation of a working group made up of municipal staff and external professionals to establish a series of social clauses adapted to the different types of cultural services and activities that the Institut de Cultura hires within the framework of its programmes.

6. Grounds of Official Cultural Protection. It aims to revert the tendencies of real estate speculation in the Raval, Sant Pere, Santa Caterina and La Ribera neighbourhoods by mobilising empty premises, reversing the economic monoculture and economically promoting them and its people. These ground floors will be offered to individuals, entities or cultural companies, so they can create spaces for cultural work, rehearsal or exhibition of artistic activities in exchange for a social rental price below the market price.

7. Oficina Ciutadaba de la Cultura (OCCU). It will be located on the ground floor of the Palau de la Virreina and will be a space for meetings, guidance and support for the cultural division.

8. Spaces of living culture. It allows the establishments to have a variable capacity based on the layout of the space, depending on the type of activity that results from its programming. This action seeks to broaden its scope to ensure the legal security of establishments, which already have regular cultural activity and, at the same time, to promote the incorporation of new ones.

9. Consolidation and amplification of the municipal exhibition circuits.

10. Culture Houses in Barcelona. The Sala BAM (Barcelona Acció Musical), which will be in the Sala Barts, will become the backbone of the music sector in the city. The Casa de la Música will be linked to other facilities in the city, such as the Casa de l'Aigua, in Nou Barris, which will become a space for musical rehearsals, and the Fabra i Coats, which will complement the Casa de la Música with spaces and resources. When it comes to El Molino, which was recently acquired, it will become a dynamisation, training and exhibition centre for the paratheatrical arts and new scenic languages.

11. Biennal d'Art Manifesta 2024. It will mean the opportunity to initiate a process of content co-design based on a system of governance that recognises and includes the city's artistic artery and major facilities. The celebration of this event will have a metropolitan reach and a great impact on the city's artistic legacy.

12. The implementation of the REC Cultural. The Recurs Econòmic Ciutadà (REC), the coin to participate in cultural activities in Barcelona, will allow the reinforcement of the link between citizens and the local cultural facilities and spaces.

13. The rephrasing of the Consell de Cultura. The action will include the creation of workgroups and monitoring committees, with the aim of incorporating, into the plenary sessions of the Consell de Cultura, a series of debates around the topics of interest that affect the cultural policy of the city. This new working structure of the Consell will also allow external speakers to be invited to contribute with ideas and debate on the issues being worked on. The results will be presented at the Plenary for discussion.

You can find more information through this link.