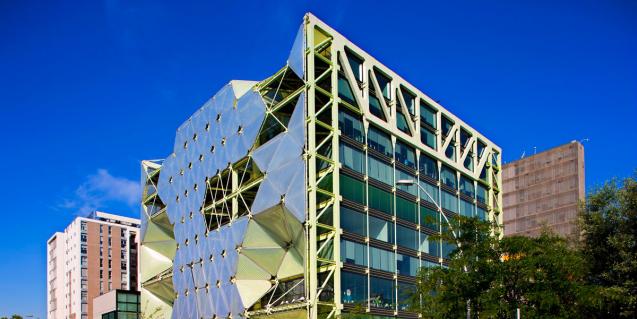 Discover the innovative buildings of one of the most ambitious urban development projects in Europe.

If there is one thing that characterises Barcelona's 22@ district, it is the technological and scientific innovation of its areas and buildings. It would not be considered one of the most ambitious projects in Europe without the number of companies that coexist alongside the district's traditional businesses. By following the 22@ technology trail, you can discover its key places on a five-kilometre walk proposed by Visit Barcelona.

First of all, you can visit the T-Systems building, one of the most emblematic, as it was the first major company to be located in the 22@ technology district. The building has seven floors and a glass-covered atrium. In addition, the office space is open, diaphanous and free of pillars. The company recently announced the move to Spain's first smart building, in the Smart complex, also located in 22@.

Near this stop is the sustainable Media TIC building. Designed by architect Enrique Ruiz Geli, it has four façades covered with pillows, making it one of the most unique buildings on the route. One of its distinctive features is its structure. Thanks to its design, which absorbs sunlight during the day and releases it at night by extracting luminescent elements, its complexion is reminiscent of that of a jellyfish.

Another stop is Ca l'Alier, the former textile factory from the mid-19th century that has been converted into a platform for urban innovation in the city of Barcelona. It is one of the clearest examples of the recovery of the industrial heritage of the Poblenou neighbourhood. The building, which is currently the headquarters of the Barcelona Institute of Technology Habitat Foundation (BIT Habitat), has various tools that define it as an intelligent building: sensors and devices for efficient management, use of rainwater, and use of solar and photovoltaic energy, among others.

Other spaces on the route include the International Business Centre of Catalonia (CINC), the Leitat Technology Centre, the INDRA Offices, the Barcelona Biomedical Research Park (PRBB) and the Diagonal 00 Tower, all built to transform the former industrial district of Poblenou into the business heart of technology. Take the opportunity to follow this route that combines tourism and technology and discover the city's most cutting-edge urban innovation plan.