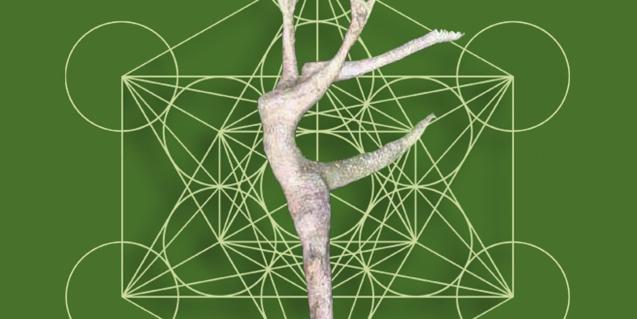 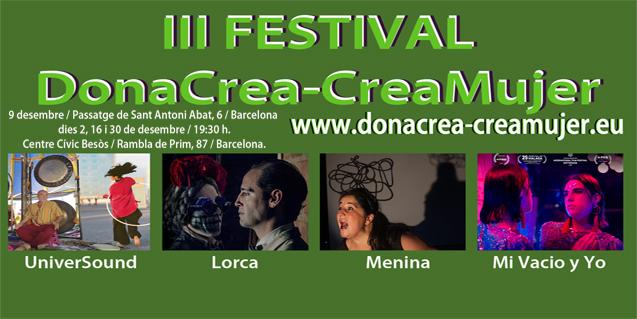 On 2, 16 and 30 December at the Centre Cívic Besòs, and on 9 December at the Jessica Walker Laboratory facilities, the third edition of Festival Dona Crea - Crea Mujer will take place, with proposals from different artistic disciplines: cinema, theatre, dance and music.

The show will  begin with UniverSound, with Leo Aguilar filling the space with the music of the spheres and planets, accompanied by the acrobatic dance of the dancer Emilia Marxen. A week later, Lorca, the Laboratorio Teatro company's eighth production, will be presented. Directed and staged by Jessica Walker, with the participation of nine performers, this experimental work reflects on memory, artistic achievement, sexual freedom and the consequences of the barbarity of war, combining collective dramaturgy, strong body work and a non-linear narrative. It is a poetic encounter between real characters from the life of the poet and playwright Federico García Lorca and characters from his works to draw an intimate and honest portrait of one of the most inspiring personalities of the Spanish 20th century. This show will be performed at the Jessica Walker Laboratory (Passatge de Sant Antoni Abat, 6).

From Lorca to Velázquez. The play that can be seen on 16 December is Menina, written and directed by Pedro Luis López Bellot and performed by Nuqui Fernández. It will be the first time that this co-production with the Festival de Teatro Clásico de Cáceres will be seen in Barcelona, and deals with school bullying from the point of view of a victim. After a weekend without a festival due to the proximity of Christmas, the penultimate day of the year the festival will end with the projection of the film by Adrian Silvestre Mi vacío y yo, starring Raphaëlle Pérez. The film deals with Pérez's transition and how she discovered that she was not a homosexual, but a woman in the body of a man.

For more information about the festival, visit its official website.