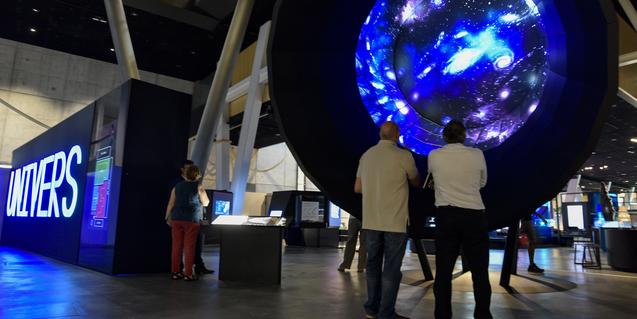 The new permanent exhibition at CosmoCaixa that summarises the history of the cosmos and life over different scales of space and time.

Following a period of remodelling, the large central area in CosmoCaixa has opened again with a renovated permanent exhibition. Sala Univers (Universe Hall), the new exhibition that summarises the history of the cosmos in three different areas, Kósmos, Evolution and Frontiers, opened on 11 July. The exhibition also includes the previous Geological Wall and Flooded Forest, as well as a new area filled with mathematical games and enigmas, the Math Lab. With all these different areas, Sala Universo invites you to go on a fascinating journey back through millions of years, explains our evolution up to the present day and points towards the future, setting out the new frontiers of knowledge.

The Kósmos area traces the evolution of the universe from the very first moment, the age-old Big Bang that took place 13,790 million years ago and gave rise to matter, space and time. The journey takes us into the most fundamental scale of matter, subatomic particles, and the forces they combine and organise with to create the planets, stars, galaxies and nebulae that cover the firmament today. But it also looks in-depth at the conditions that have made it possible for inert matter to produce life.

The Evolution area is all about life. Life is something that, so far, we have only managed to find on our planet and its origins on Earth are estimated to date back 4,000 million years. There are still many unknown factors regarding how life originated but thanks to science we have managed to understand how, from the first primitive, unicellular organisms, the mechanism of natural selection has given rise to the great diversity of lifeforms that exist today: millions of species adapted to their natural environment, which relate to one another, forming an ecological network as sophisticated as it is fragile.

But if there is one thing that is extremely sophisticated, it is the brain; in particular, the human brain. It is the most difficult organ to study, with a complexity greater than the entire universe, the only thing known to have the capacity to ask questions about the laws that govern the cosmos and find answers based on evidence. Human beings and knowledge are the main protagonists in Frontiers, the third area in Sala Univers, which puts the spotlight on our own biology, sociability, culture and cognition. This has allowed us to progress to where we are now and opens up the door to new knowledge and upcoming technologies.