Rosa Sensat’s greatest pedagogical work, the Escola del Bosc, saw the light on 8 May 1914. It was both an institution promoting cleanliness and a testing ground for the values of the pedagogical vanguard. Its founder wanted it to become a model for educational reform during the Spanish Republic. 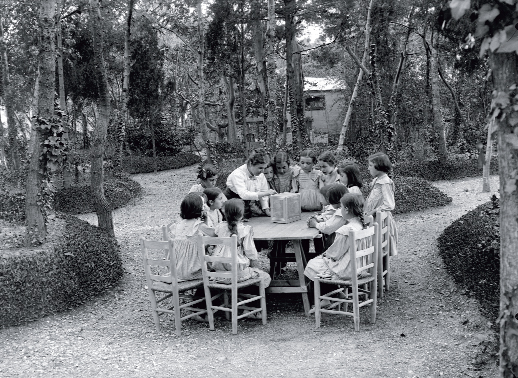 Rosa Sensat i Vilà is an unusual case in Catalonian pedagogical history. When the culture budget for Barcelona City Council was drawn up in 1908 and a new network of outdoor schools was created (1914), two traditions were encompassed: modernism, which strived to make culture accessible to everyone, and noucentism, which saw education as an undertaking in civic-mindedness – thus placing Barcelona in the educational vanguard.

The aspiration of regenerating society through education gave teachers an unprecedented status. This coincided with the breath of fresh air that women gave to the educational world, from which they had been barred for centuries. Moreover, the concern for children’s health and their physical, social, moral and cultural instruction gave rise to a life-centred teaching approach and an all-encompassing educational approach that led Rosa Sensat to focus on “making people” (González-Agàpito, 1989). In this context, Sensat’s grand educational undertaking was born on 8 May 1914: the school known as the Escola del Bosc, inspired by the Berlin’s Waldschule in Charlottenburg. Sensat led the school until 1930 when she moved to the Milà i Fontanals school group, where she worked until 1939. 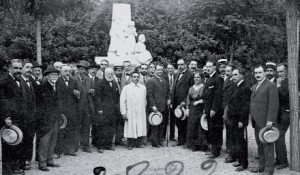 © Brangulí / Arxiu Nacional de Catalunya
Rosa Sensat with a group of officials and the architect Antoni de Folguera, responsible for the restauration of the Parc Laribal de Montjuïc’s building as well as the Escola del Bosc, during a visit to the centre in1914.

Before the creation of the Escola del Bosc, Sensat had studied teacher training in Barcelona, subsequently practising as a teacher in the Municipal School of Masnou and in a primary school in Girona. She later obtained a teacher training licence to become a teacher trainer in the Escuela Central de Magisterio in Madrid. She worked as an assistant for four years in the capital, which brought her into contact with the Institución Libre de Enseñanza. She completed her practical training at a school in Sant Martí de Provençals, as well as in a state school.

The Escola del Bosc of Montjuïc was situated in a very beautiful park with fountains and gardens, making it ideal for outdoor games and classes. The hygiene facilities, anthropometric office, dining room and infirmary were veritable novelties. Cultural education also enjoyed a prominent place thanks to the music room. There were covered playgrounds to provide protection in bad weather and the dining room was located in an old Moorish-style cottage, which also housed other services.

Rosa Sensat always directly managed the food served in her schools, striving to provide a balanced diet (Cussó i Garrabou, 2004, p. 498), one aspect of her life that has never been properly recognised, despite being one of the most important to Sensat herself (Sensat, 1988). Sensat’s character can be glimpsed in these details and in her obsession with recording all her experiences, both in her class diary and travel notes, hence we could say that the teacher from Masnou produced a manuscript of her professional life. The book Vers l’escola nova [Towards the new school; 1934], her most essential work, is a valuable document that narrates the experience accumulated over the years managing the Escola del Bosc. In a very deliberately-conceived setting, she promoted the nurturing of sensitivity to the extent that “an environment conducive to the development of artistic feeling was created”.

Some of her other works include Les ciències en la vida de la llar [The sciences in household life; 1923, republished in 1998], where she showed her knowledge of science, gained on a course on Home Economics for housewives in 1921. The book’s programme addressed four points, intended to scientifically support practical and everyday household chores: air, water, dressing and the diet. Its success prompted her to write Cómo se enseña la economía doméstica [How to teach Home Economics; 1927], intended as training for primary school teachers. It is true that for Rosa Sensat, home economics took on an unheard-of importance and she thus – despite the reformist nature of the publications – became a pioneer of feminism.

This feminist vitalism was understood as a “practical and conscious preparation for housework and a comprehensive training of women for family life” (González-Agàpito, 1989, p. 119). As a result, and after visiting several domestic education institutes in Belgium, Switzerland and Germany, Rosa Sensat reasserted her belief in preparing young girls as future housewives. It should be remembered that in 1920 the Education Council of the Mancomunitat (the Commonwealth of Catalonia) created the domestic education section, to which she turned her attention during her spell in Alicante, after passing the state examination to become a needlework teacher in 1900. This all led her to participate, in 1922, in the 3rd Congrès International d’Enseignement Ménager (Paris, Office Familial-Ménager). Women had to “know about physics and chemistry” and physiology, since they were the guarantors of a household economy that would improve families’ living conditions. 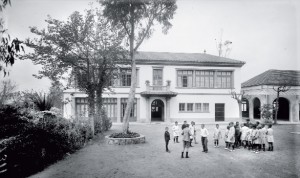 © Brangulí / Arxiu Nacional de Catalunya
Children in the school garden, on an unspecified date between 1920-1925.

Just as science affects life, then so too must the school also be life. Rosa Sensat made this her ideology when she addressed introducing life into the school, guaranteeing a system of responsibility, as she clearly explained in Vers l’escola nova: “We wanted it to be a place where people learnt to live”; a “vitalist work […] in close contact with nature” which tangentially embraced evolutionist postulates and brought pedagogy closer to biology. Hence, naturalism and vitalism underpin Rosa Sensat’s pedagogy, which does not progress in leaps and bounds but rather follows the laws of nature. Life generated the desire to transform school into a true home where free and natural experience can blossom, without shackles, aspirations which were met with a certain degree of incomprehension by others in the profession. That is why children travelled to school by themselves on the tram, soaking up the positive and negative experiences of everyday life: “This made them familiar with incomprehension and injustice”. At the same time, Sensat insisted upon the importance of children taking on minor responsibilities: the school became a living image of the home, a prolongation of family life and a form of preparation for social life. This is the meaning that Galí attributes to the expression the “living school”, the representation and expression of society.

In other words, the Escola del Bosc was not just an institution promoting hygiene, but also an excellent new school, since it fulfilled the requirement of being an experimental school aligned with the values of the pedagogical vanguard. With the advent of the Second Republic, it aspired to becoming a model for all those schools that would follow the pedagogical reform. Rosa Sensat ultimately fought all types of misery: “The school’s entire spirit was geared towards forming an atmosphere of moral elevation for the dignity of young girls.” These miseries and this dignity were denied to her, since after the Civil War Rosa Sensat was one of the teachers who suffered the educational cleansing implemented by Franco’s regime.

Les ciències en la vida de la llar, diaries and travel impressions can be referred to in the digital archive of the Rosa Sensat library (http//mdc.cbuc.cat).

One thought on “Rosa Sensat, a groundbreaking teacher”