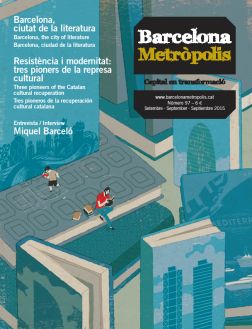 Barcelona, like all other cities, is a personal affair. Like a speech, or a story, or a piece of propaganda, each city is born of of how it is seen, how it thought. And if luck is on its side – and if the linguistic mirror is at once modest and ambitious – how it is lived through literature.

Picadura de Barcelona is an extraordinary book. On the one hand, it is an excellent autobiographical novel, a brilliant example of the virtues attainable by the so-called self-literature of our day and age. It is a self-narration alternating between two points in time: a sleepless night wandering the city alone, thirstily drinking beers brimming with meaning, as if in a parallel urban hub suspended in time and clouded over by adventurous detachments, and simultaneously a two-decade leap – from adolescence to the impossible age of maturity – between the student from Begur who staked his future on Barcelona and the indecisive anthropologist closing in on forty. This second storyline may bring to mind the hidden structure of fictional biographies.

On the other hand, Picadura de Barcelona is also the most accurate portrayal of Barcelona in the essay genre to come about in the first three lustra of the 21st century. The autobiographical recap presents scenes of a Barcelona never-before-seen in literature, in revealing, surgical episodes: with characters and situations that reveal, above all, naturalised impostures, and the strategies behind self-consent and self-celebration, behind a systemic cultural fraud that Barcelona – from the position of those in power – has wanted to make its identity. Adrià Pujol’s perspective, as an unabsorbed insider who refuses to say that he can still see “the emperor’s new clothes”, is a moral and a critical one; one marked by the skill and intelligence of a well-trained gift for observation and analysis, and one that is well-documented, given his anthropological works on everyday life.

One could say that Picadura de Barcelona’s protagonist inhabits the city like an epiphyte; that is to say, like one of those species that lives without putting down roots, feeds off the air rather than the sun and lives on top of others without draining them like a parasite. In one way or another, this need to be in the city with others (an intellectual necessity, a necessity for survival) and the unfeasibility of laying roots there without a proper dose of self-deception combine to trace the outline of a refined collective portrait, incomplete as all portraits are wont to be, but richly nuanced.

The city appears, validated, like an inarticulate dialogue between power – the powers – and personal possibilities. Adrià Pujol’s take seems to be a lucid acceptance of the tumult (in the end, to call it “chaos” would be an exaggeration of egotistical redemptionism) whilst presenting, also at once, cynical militancy in the tumult; like a space where liberty and dignity are possibilities, like a road to self-defence and to learning.

The “sting” is, then, a vital necessity for fracturing things, stirring them around, cutting them up and making them go up in smoke – that is a fertile possibility for the critical spirit. It is such a necessary possibility that it must not be left to complacent thinkers (fluid, post-modern, or whatever you want to call them). Adrià Pujol Cruells wanders – moves around – and plays. But the journey and the game have a purpose: understanding. Now that’s good!