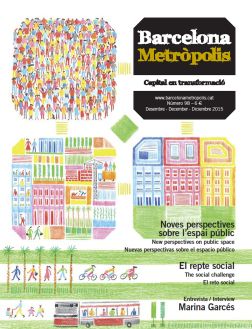 [The History of the Circus in Barcelona]

Barcelona City Council and Viena Edicions publish the history about the golden age of the circus in Barcelona in the 19th and 20th centuries. This is a work of Ramon Bech, investigator on circus and cofounder of the Circus Arts Foundation.

I see the word “circus” as being associated with childhood. I remember the arrival, around Christmastime, of the circuses that every year were advertised as “the world’s biggest show” and still visit the city today. If I had been asked when the circus came to Barcelona for the first time, before reading this book I would not have been able to answer. The author, Ramon Bech (Figueres, 1967), finds the oldest evidence in the companies of “volatins”, or acrobats, who performed at Santa Creu Theatre on 12 February 1722.

Barcelona was a great circus capital in the 19th and 20th centuries, and was the centre of the show’s golden age thanks to the numerous travelling acts that visited the city as well as the permanent spaces built there so that audiences could enjoy this performing art. Bech takes stock of both these travelling acts and permanent spaces in his book, dedicating the main part to the three emblematic buildings located in the city centre: the Barcelona Equestrian Circus (1879-1895), the Tivoli Equestrian Circus on Carrer de Casp (1897-1907) and the Olympia Circus Theatre (1924-1947). Other emblematic spaces mentioned include the bullrings Les Arenes, El Torín (in Barceloneta) and Monumental. There were also circuses on Paral·lel and in an open area behind Sagrada Família cathedral.

Over 200 unpublished photos and plans of circuses, programmes and portraits of the impresarios and artists take us back to a time and to spaces that have since disappeared. The materials largely come from the archives of the Circus Arts Foundation, an organisation based in Figueres that was cofounded by Bech and Genís Matabosch. Its collection holds the 8,000 negatives and notebooks with notes by the photographer and historian Josep Vinyes, a legacy Bech found indispensable for producing this book. It was also essential to rediscover the few circus chroniclers of Barcelona: Jordi Elias, Sebastià Gasch, Joan Tomàs and the above-mentioned Josep Vinyes.

The result is an exhaustive work that alternates visual material with texts by the author or from contemporary accounts in an entertaining way. Moreover, in addition to the history of circus construction we also find some curious details, such as the fact that in its early days the Liceu Theatre hosted tightrope walker shows, and in 1889 the legendary Buffalo Bill show was set up between Carrer Aribau and Carrer Muntaner. There is also curiosity and rejection in equal parts found in some articles about a trapeze artist called Bella Geraldine, who unleashed passions among male audiences and was the envy of many women.

The overall aim of this book is to pay tribute to and document everything as accurately as possible; from the first acrobatic shows in Barceloneta and at Santa Creu Theatre to the circus numbers in other performance genres such as theatre and music hall, which appeared in the late 19th and early 20th centuries. The chronicle goes right up to the 1970s, when Barcelona was the first city to host the World Circus Festival at the Palau d’Esports, seen as a competition between circuses.