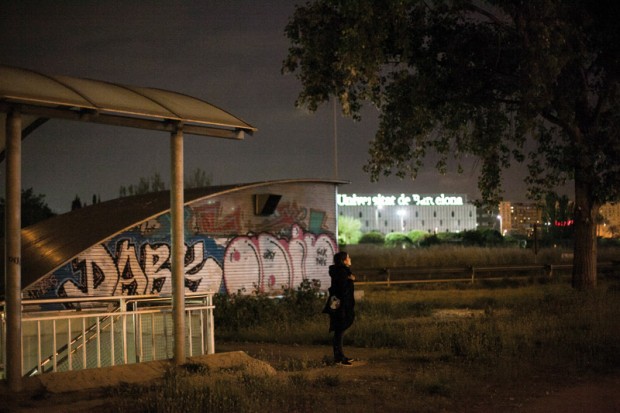 A black spot for safety in terms of mobility and transport at night: the tunnel crossing under the Gran Via between Bellvitge Hospital and the Baixbus bus stop. The picture shows the entrance to the tunnel on the hospital side.
Photo: Arianna Giménez

Historically, urban planning has followed an androcentric city model that has excluded women from public spaces, which have been designed as predominantly male spaces. One only needs to observe how in Catalan a home públic (public man) is a famous man, while a dona pública (public woman) is a prostitute to see how these different meanings translate into the physical configuration of spaces.

The problem becomes more evident when night falls. The night-time city has traditionally been a space from which women are barred. A place where our presence is often questioned, especially when we are on our own. One where our bodies are perceived as vulnerable, but also as objects. This has influenced the perception of women’s safety at night – particularly in relation to sexual violence, which affects the most intimate aspect of our bodies – and restricts our right to the city.

Most urban planning projects that look at night-time city planning have centred on what is known as the night-time economy of city centres. This scheme seeks to revitalise the economy through nightlife and alcohol consumption and perpetuates a night-time culture that is predominantly masculine and hetero-patriarchal.

Night-time city planning, then, has focused on just a small segment of life at night, reproducing a romantic view of the night-time public as consumers of entertainment. This focus fails to recognise that night-time is also a time of work, caring and reproduction devoid of any glamour at all in the eyes of those who work nights, and all this has a significant impact on their everyday lives.

In order to highlight the need to include productive/reproductive aspects of the night from an intersectional feminist standpoint, and to break with the predominantly male, entertainment-based night-time culture, Col·lectiu Punt 6 set out to develop a research project with women who work at night. “Night creatures: the everyday life of women who work at night in the Metropolitan Area of Barcelona” is a research project-cum-participative feminist initiative that was carried out between 2015 and 2017 to analyse how urban planning in Barcelona’s metropolitan area impacts on the everyday lives of women who work at night. More specifically, it studies aspects such as how gender roles influence mobility, the perception of safety, the decision to work at night, how everyday life is played out, social relations, health and employment inequality.

This project was carried out in partnership with the social justice foundation Fundació Àmbit Prevenció, the Comisiones Obreras trade union’s office for women, the Ca la Dona women’s organisation and the Irídia human rights centre, along with a team of 24 women who work at night in different industries and areas (cleaning, healthcare, care for the elderly, local police, emergency services and sex work).

Night-time mobility and perceived safety are the two issues that most affect the everyday lives of female night workers, particularly those who travel by public transport or on foot. The Barcelona metropolitan area’s public transport system does not meet the needs of the female night workers community: the times, frequencies and routes of night services present a real obstacle. The public transport system connects the outskirts of the metropolitan area with the city itself, but the connectivity between different towns leaves a lot to be desired, especially in El Baix Llobregat, and even when towns are close to each other. It’s not that there isn’t any public transport, it’s just that the time it takes to go from A to B is so long that it seriously prejudices the people that most rely on this transport, particularly at certain times of the early morning (between 5:00 am and 6:30 am) and at the weekend, and particularly on certain routes. 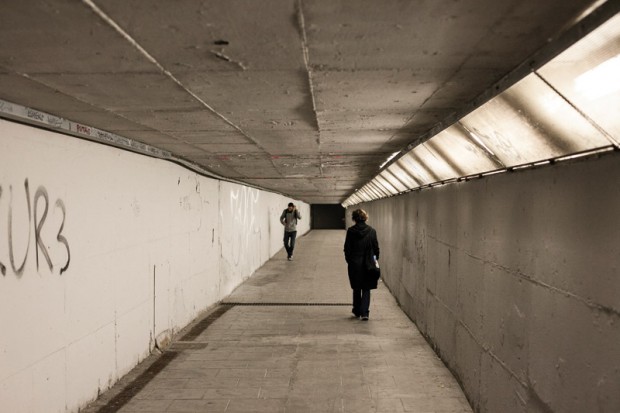 The subway to Bellvitge Hospital from the bus stop on the other side of Gran Via.
Photo: Arianna Giménez

The sense of a lack of safety is another factor that limits women’s right to the city and that is partly caused by physical aspects of the environment such as the monofunctional nature of work sites and the lack of visibility in these areas. But this factor also intersects with mobility: on the walk to the public transport facility, in the facility itself and inside the public transport vehicle.

The way these transport infrastructures have been designed doesn’t afford women autonomy, safety or freedom of movement. Factors such as the layout of parking areas and the nature of the on-foot sections of the journey between mode of transport and place of work or home ultimately drive women to change their routes, look for alternatives or rely on other people to get to work and home again. Several particularly worrying cases of sexual violence have been recorded. These include the one in the underpass under Gran Via between Hospital de Bellvitge and the Baixbus stop, and another at the bridge connecting the Santa Eulàlia metro station with L’Hospitalet’s Collblanc district.

In monofunctional work areas, the lack of diverse activities and mixed uses can be linked to designs that ignore pedestrians. These are areas that have a dearth of public transport, that prioritise the use of private vehicles, that have broad and often poorly-lit avenues where hardly anyone is seen walking at night, and that lack any decent connections with nearby neighbourhoods.

A lack of safety can be attributed to both physical and social factors. One issue of great concern is the fear that a group of inebriated people, particularly men, can inspire on Friday or Saturday night journeys. Many women share stories of the sexual harassment they’ve experienced on their journeys, which has forced them to change routes so as not to leave any trace of their itinerary and avoid being followed.

The most vulnerable groups 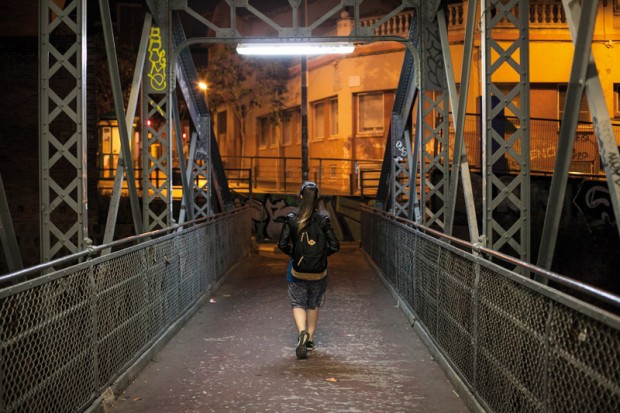 The bridge that connects the Santa Eulàlia metro station with the Collblanc district in L’Hospitalet.
Photo: Arianna Giménez

It is worth noting that some groups of women are more vulnerable to sexual assault than others. Both street sweepers and sex workers suffer sexual assaults and acts of violence. This is because of the way society as a whole views women’s bodies in public spaces at night, and because of the socially undervalued nature of the work they do. Sex workers feel vulnerable because they work in the street, and because their bodies are seen as objects that can be coerced and abused far beyond the job they are being paid for. Street sweepers also suffer harassment and assaults just for being women who clean streets. The low social value of cleaning work means that they are often treated as just another piece of street furniture or are harassed and assaulted.

These are some of the conclusions drawn by the project. The analysis of everyday life, with the active participation of the subjects of this study, has helped to shed light on the way women use the city at night and to vindicate our right to call it our own, irrespective of how we use it or what we do during the night hours.

Video on the project: https://www.youtube.com/watch?v=LvKxqeAJRTY.

Video on mobility and safety: https://www.youtube.com/watch?v=vp3EZiQufsA&t=8s.

Video on the impact on health: https://www.youtube.com/watch?v=JC2oJY2OERc&t=7s.

This project was made possible by a two year bursary (2015-2017) from the Public Scholars Initiative of the Department of Graduate and Postdoctoral Studies of the University of British Columbia (Vancouver, Canada) and by a grant to organisations awarded by the Barcelona City Council in 2016.