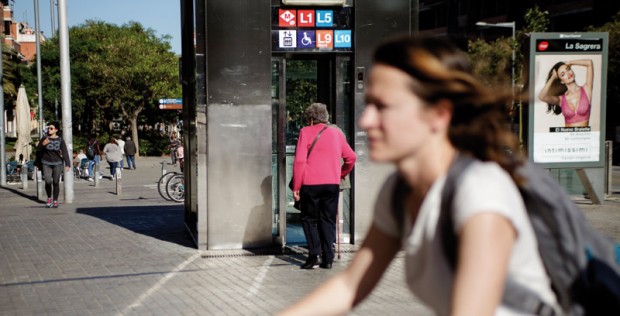 Urban policies must take into account different forms of mobility that often vary depending on one’s stage in life and people’s gender roles in the social structure. In the photograph, lift access to La Sagrera metro station.
Photo: Arianna Giménez

The World Association of the Major Metropolises, better known as Metropolis, is a 138-city-strong lobbying organisation that calls for cities to occupy a central role on the world stage and facilitates the sharing of urban-planning knowhow and good practices. Ada Colau, Mayor of Barcelona, is a co-president of Metropolis, and the organisation’s general secretariat is also headquartered in Barcelona. One of the organisation’s strategic networks, Metropolis Women, is working to mainstream the gender perspective within the association. The Metropolis Women presidency is based in Barcelona, and Laura Pérez Castaño, Councillor for Feminism and LGBTI, has held the role for the past year.

A new stage is beginning for Metropolis Women, conceived as an instrument for incorporating the gender perspective, with a mission to create more humane cities that place everyday life at the heart of urban policies. “The main objective is to give Metropolis a gender vision”, explains Sílvia Llorente, project lead for the initiative. Metropolis Women was not only set up as a specific section of the association but also as a transversal strategy. This approach follows that taken by the City Council to imbue all policies with a gender perspective.

Through Metropolis Women, Metropolis is working to grant the right to the city to every person, in the words of the philosopher Henri Lefebvre, so that everyone can become more closely involved and participate in the urban environment. “When we talk about urban planning it is as though it is something that is neutral, but it isn’t. Cities are physical spaces in our society which, therefore, also produce roles and inequalities”, says Llorente.

The cities participating in Metropolis are spread over five regions: Europe, Asia-Pacific, Africa, North America and South America. It brings together areas like Mashhad (Iran), Seoul (South Korea), Bogota (Colombia) and Montreal (Canada), which is where the Association’s president, Denis Coderre, hails from.

Not all cities are working in the same way or are prioritising the integration of the gender perspective in urban policies. Within Metropolis, women represent only 18% of elected public officials in member cities. To reverse this and other forms of discrimination, in October 2016 in Bogota the new Barcelona-held presidency approved new areas of strategy for the association. The aim, first and foremost, is to provide all structures with a gender perspective and to define a new political agenda that incorporates this perspective. The second aim is to identify and share good practices implemented by member cities and to create synergies that generate new knowledge. Lastly, it positions Metropolis as an international leader in urban policies with a gender perspective.

Internally, Metropolis has already made changes that have achieved results throughout the organisation, such as giving Metropolis Women a voice and a vote on the Board of Directors, the highest decision-making body. In line with the commitment to create a diverse, caring and sustainable city aimed at facilitating the daily lives of people, the women’s network has prepared a policy agenda on two themes: sustainable mobility and safety in public spaces.

Regarding the former, Sílvia Llorente argues that urban policies do not take into account other forms of mobility, such as women’s mobility, that often vary depending on stage of life and people’s gender roles within the social structure. That is why it is so crucial to analyse the reasons that people move around the city, its characteristics and time/space relationships. “Public transport has to meet a wide range of needs; the lack of a response in that regard has an impact on women’s right to the city”, says Llorente.

As to safety in the public space, up to now it has been framed within a patriarchal model that is associated with crime; but if there is no violence, there is safety. For Llorente, Metropolis Women’s head of project, the whole idea should be changed, since the perception of security has long been built on the basis of the positions occupied by men and women in the power structure and everyone’s traditional roles in the public space. “We need to look at the city through different eyes in order to ensure the safety of each and every one us,” adds Llorente.

To achieve this, the Metropolis Women presidency, along with cities such as Seoul, Quito and Brussels, has submitted a proposal to an international Pilot Project called by Metropolis. The aim is to create a gender audit that will provide guidance to member city councils as they implement public policies to combat sexual violence in urban areas.

“At Metropolis, Barcelona is seen as a feminist, pioneering city that takes the lead in gender policies”, says Llorente. The city often receives invitations to all kinds of seminars and conferences. “We not only go to places where the discourse is similar to our own, but also to where we can open cracks and incorporate a gender perspective”, she adds.

Barcelona is introducing policies of change, but also looks to those of other cities. In technical terms, such as gender budgeting, Brussels leads the field. When it comes to creating participatory momentum, the gaze is increasingly moving towards cities in the Americas, with a particular focus on the community work of feminist associations, of women and of government policies aimed at combating sexual violence in the public sphere, precisely because they are cities with high rates of insecurity.

The Metropolis Women presidency highlights the need to plan cities that provide for the broad range of functions, uses and sustainable activities in the same space so as to ensure, in the words of Jane Jacobs, a constant “urban dance”, where a multitude of people give life to our streets and make them safe and active. As Llorente says, “the gender perspective is crucial for building metropolises in which the right to the city is democratic, so it is doubly important that this is in Metropolis’s DNA.”

1. Construct a jointly created, inclusive and sustainable city model that embodies the right to the city as a fundamental democratic right. At the heart of that model should be “care”, that is, the reproductive activities of society that are often manifested as domestic tasks and involve caring for other people.

2. Establish a governance model with a gender perspective, ensuring that women participate in the design and implementation of mobility policies. It should be metropolitan, multi-level and intersectional and jointly created.

3. Incorporate personal, social and family uses into the way residents use their city; they must be plural and based on the needs of everyday life.

4. Promote democratic urban mobility that is physically, economically and socially accessible, that adapts to the needs of all citizens and promotes individual autonomy.

5. Foster the concept of compact and mixed cities, which give priority to using sustainable public transport based on proximity, adapting timetables and levels of frequency and connecting cities with peri-urban and rural areas, and that protect the public health of citizens.

6. Recognise that men and women have different perceptions of and approaches to their safety, which is a fundamental right. With that in mind, the physical and psychological safety of each and every one must be ensured by focusing on indicators that go beyond the traditional concepts of conflict, crime and insecurity.

8. Promote the creation of new ways of moving around that respect the environment with high-quality public transport.