Enrolment of children under three

Inauguration of the family space ‘From 0 to 3 years old’ in Vil·la Urània, a municipal facility in the Sarrià-Sant Gervasi neighbourhood. © Goroka.

In Barcelona, only four out of 10 children between infancy and the age of two are enrolled in school. Education at this stage is a mechanism for equalising opportunities that especially benefits children from disadvantaged families. The Institut Infància i Adolescència de Barcelonahas identified three main challenges in achieving universal education for these children: increasing the public availability of preschools and municipal family spaces, improving equal access to education services and fostering a more comprehensive education and childrearing policy for all young children.

These are the main conclusions drawn from the study “Oportunitats educatives de la infància I l’adolescència a Barcelona 2018-2019” [Educational opportunities for children and adolescents in Barcelona 2018-2019], which also includes a compilation of significant projects that are already being carried out to reduce inequalities at the earliest stages of education.

ENROLMENT OF CHILDREN FROM INFANCY TO TWO YEARS OLD BY AGE. 2017-2018 SCHOOL YEAR

Districts with the lowest disposable family income are those with the lowest enrolment rates for children up to two years of age. There is also a significant correspondence between the enrolment rate at this stage and the number of preschools per 1,000 children in each district. In higher-income neighbourhoods, enrolment is higher.

Enrolment from infancy to two years of age has grown considerably in the last two decades, rising from 36.6% in the 2006-07 school year to 44.3% in 2017-18. By district, the evolution is uneven. It is noteworthy that in Ciutat Vella there has been almost no growth and that in Horta-Guinardó there was even a decrease. These are the districts with the lowest enrolment rates in the city. 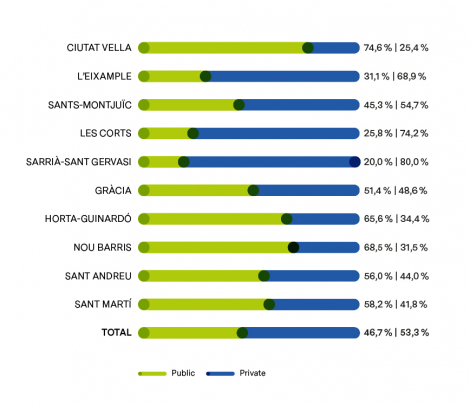 DISTRIBUTION OF ENROLMENT FROM INFANCY TO TWO YEARS OF AGE, BY PRESCHOOL ONWERSHIP AND BY DISTRICT (%). 2017-2018 SCHOOL YEAR

More than half the children under the age of three go to private preschools (53.3%), but the distribution between public and private networks is very uneven. In the districts with the highest family income and highest enrolment rates, seven out of 10 children go to private preschools. In the three districts with the least enrolled children, Ciutat Vella, Nou Barris and Horta-Guinardó, the situation is the opposite: they attend publicly owned preschools in 7 out of 10 cases. 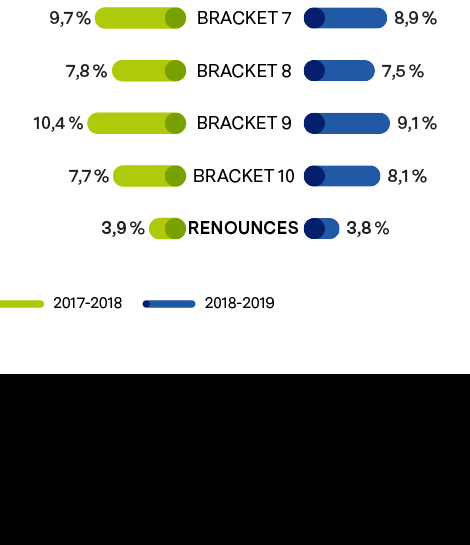 In the 2017-2018 school year, changes were made to the pricing system of public preschools in order to increase equity and improve access to them. Each family paid according to its family income (divided into 10 brackets) and the number of family members. Families with the lowest income (bracket 1) made up one third of the total. However, the top three income brackets also added up to a third of the total. Half the families in Ciutat Vella and Nou Barris paid the lowest price. In Sarrià-Sant Gervasi and Les Corts, the proportion of families in the highest brackets was above the average in the three highest income brackets (40%).

With the new social pricing system by bracket, 65% of the families paid a lower public price than established under the previous system (brackets 1 to 6), 9% paid the same (bracket 7) and 26% pay a higher price. In lower-income districts, more families benefitted from the new pricing system. But there was also an increase in families receiving bonuses in higher-income districts, such as Sarrià-Sant Gervasi, Les Corts, Eixample and Gràcia. 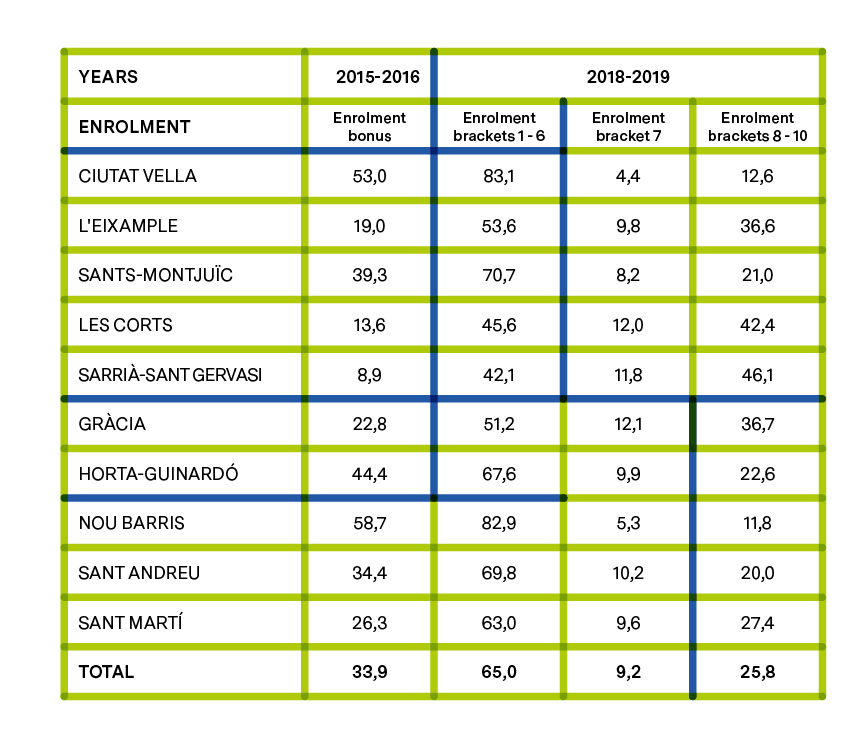 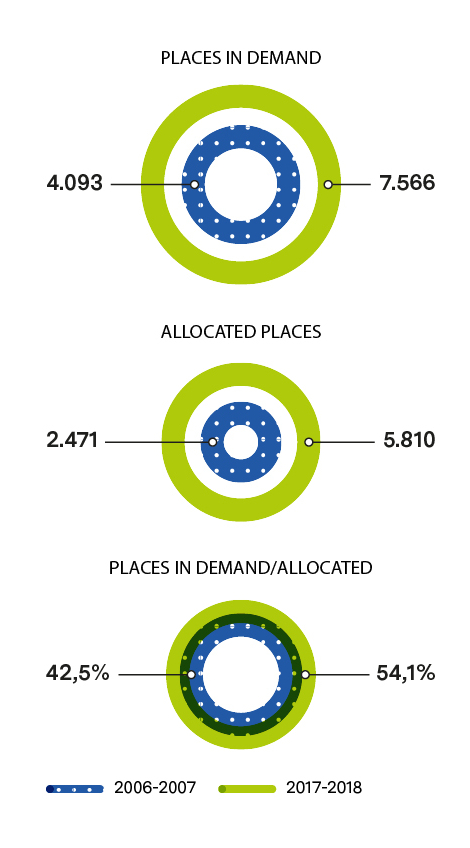 The demand for places in preschool has increased year after year, but so has the number of places available, so more applications have been accepted. Demand between 2006-2007 and 2017-2018 increased by 30% and the percentage of allocated places increased by 12 points, from 42.5% to 54.1%. However, only two out of 10 children under the age of three were enrolled in municipal preschools in the 2017-2018 school year. The differences by district are large again. Demand for places has increased especially in districts where disposable family income is higher. In Sarrià-Sant Gervasi and Gràcia, it has more than doubled, from 3.6% to 9.4% of the population in Sarrià and from 11% to 27.5%, in Gràcia. In lower-income districts, the increase has been more modest and even decreased in Ciutat Vella (-16.4%) and Nou Barris (-2.7%). 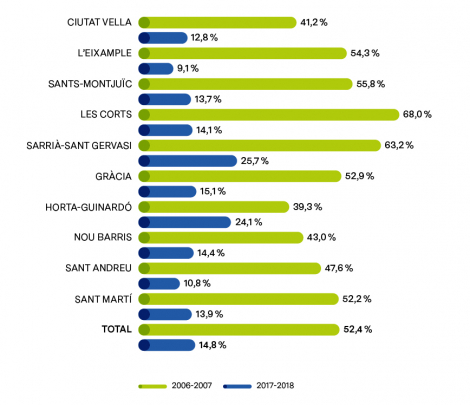 ENROLMENT RATE FOR CHILDREN UP TO TWO YEARS OLD, BY NATIONALITY AND BY DISTRICT (%). 2017-2018 SCHOOL YEAR. COVERED BY PUBLIC PRESCHOOLS

The most foreign-born children in preschool are from other European Union countries (32.9%), followed by children from Central and South America (32.5%). The districts where most foreign-born children are from EU countries are those with the highest enrolment and available family income rates (Gràcia, Sarrià-Sant Gervasi, Eixample and Les Corts). Children from Central and South America are the largest group in Sants-Montjuïc (38%), Horta-Guinardó (50.8%) and Nou Barris (58.4%). In Sant Andreu, the largest group consists of Maghrebi minors, which account for one third of the children up to two years old enrolled there.