Until 11 October, only open for specific activities 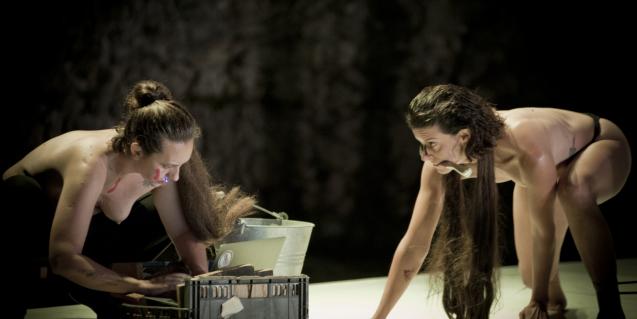 Next year's activities have been organised around the Barcelona Producció call and the Concentric, Context Schools and Mediation programmes.

The director of La Capella Art Centre, David Armengol, has presented the new programme for the 2022-23 academic year, accompanied by the Barcelona Producció jury member Marc Vives and Jara Rocha, member of the Context Schools.

The activities will begin with three shows under the cycle Live Arts: La mondonga, by Carolina Olivares (28 September at 8 p.m.); Utopia and Slavery, by Eduard Escoffet (29 September at 6, 7 and 8 p.m.), and És només un dia, by Carolina Campos and Márcia Lança (30 September, from 4 p.m. to midnight).

The first solo exhibitions will open their doors on 11 October at Espai Capella and Espai Rampa, respectively. They are Diego Paonessa's Otra luz cegadora (Another Blinding Light) and Jaume Clotet's New Ywork. On 17 January, they will be replaced by Carmen de Ayora's Cabra se convierte en mochuela and an exhibition by Julia Varela inspired by the Chinese e-commerce platform Alibaba. On 15 April, it will be the turn of Mónika Rikić, with Hipertèlia, and Iván Gómez, with InFirmitas. And on 6 July, the programme will close with Ángel peligrosamente búho [duelos, espectros y materialidad] and Quan ja no ens escalfa el sol, curated by Núria Gómez Gabriel and Zaida Trallero, respectively.

The delocalised projects section is made up of the actions Pertú [L’ofrena] by Estel Boada and a sound project, the radio soap opera A la deriva. Contra-narrativas emocionales de la inmigración, by Ricardo Cárdenas. On the research project front, you will be able to see the triptych Tres veces dije fuego by Marta Echaves and Ritmoepistemologías produced by the Oficina para la Edición de Patrones y Poéticas de la Repetición (OEPPR) on behalf of Carolina Jiménez and Lorenzo Sandoval.

As the publication project, the musician and artist Pau Magrané will present ANX N PVC, a documentary/experimental sonic work that takes as its starting point an investigation into audio projects published in physical format by visual artists, museums, art galleries, as well as other entities or events. And as for projects on digital environments, Andrés Galeano will promote Nephogram — a reflection on the Internet's virtual cloud and its environmental impact in the form of carbon dioxide emissions — and Enrique Radigales will carry out an anthropological exercise to recover "the first digital awakening" of the multimedia sphere in CD-ROM format that between 1999 and 2001 was shown in Barcelona under the initiative of Fiftyfift in The Wild User Experience.