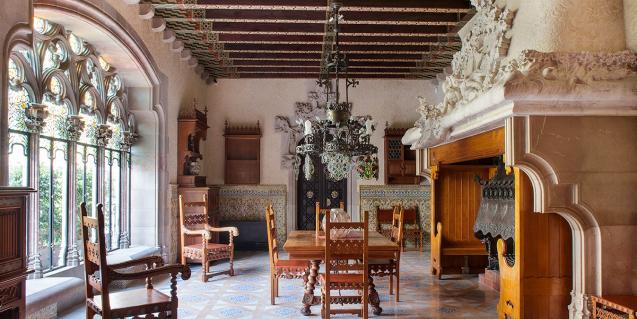 Every Friday night, an actress shows the interior of the modernist building remodelled by Puig i Cadafalch.

During August and September, the cultural services company Cases Singulars offers a dramatised visit to Casa Amatller every Friday at 7 p.m. The tour opens the different rooms to the public and explains their main characteristics with the help of an actress who recreates the figure of the former owner. The experience lasts an hour and a half and ends with a glass of wine or fruit juice in the garden.

Casa Amatller is the result of the intervention that the chocolate maker Antoni Amatller commissioned in 1898 to the modernist architect Josep Puig i Cadafalch on the previous building, built in 1875 by the master builder Antoni Robert. The transformation was possible thanks to the regulatory changes introduced by the City Council in 1891 in the development of the Cerdà Plan, to such an extent that the increase in the buildable area and the compositional freedom of the façades turned this section of the Eixample into "the block of dissent", as the Casa Amatller was joined by the projects of Lluís Domènech i Montaner in the Casa Lleó i Morera (1902-1906) and Antoni Gaudí in the Casa Batlló (1904-1906).

When her father died, the property passed into the hands of his daughter Teresa Amatller Cros, who in 1941 promoted the creation of the Amatller Institute of Hispanic Art Foundation, which is currently governed by a board of trustees and continues to ensure the conservation of the house and its bibliographic, photographic and archaeological glass collections.

Led by an actress who plays the role of Teresa, the guided tours of the Summer nights at Casa Amatller recreate an itinerary through the interior spaces designed by Puig i Cadafalch, such as the entrance hall, the common areas of the staircase and the courtyard. The tour also includes the main floor with the medieval-looking dining room; the living room presided over by a bust of Antoni Amatller by the sculptor Eusebi Arnau; and the bedroom and his office.

At the moment, the visit has a promotional price of 18 euros and can be purchased in advance at this link, choosing your preferred language (Catalan or Spanish).