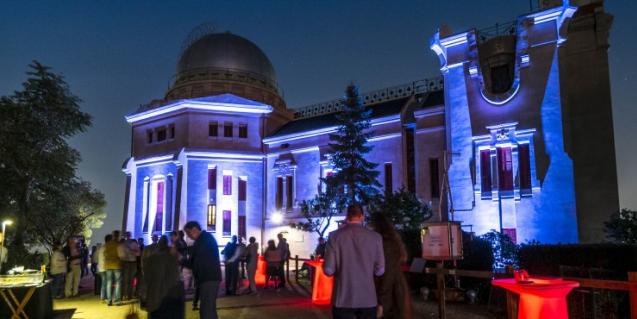 A gastronomic and astronomic proposal to explore space from the Fabra Observatory.

Imagine enjoying a dinner illuminated by the light of the stars and planets that observe us from the immensity of the universe in an idyllic space. Imagine being able to observe them as they observe us. Imagine, then, Dinners with stars. During the nights of the summer months, the Fabra Observatory organises a unique experience thanks to the fusion of gastronomy, astronomical observation and popular science. From 3 June to 2 October you will have the opportunity to experience it on the border between the Collserola Park and the fervour of the city of Barcelona, in a space located 400 metres above the metropolis.

The event begins with a dinner on a terrace with privileged views, where a menu inspired by astronomy will be offered. The evening continues with a participatory conference where, in addition to discussing topics such as the Big Bang, supernovae or the possibility of searching for a new Earth, among others, you will have the opportunity to resolve all your doubts thanks to personalities such as the astrophysicist, consultant and science divulgator Joan Anton Català or the astronomer Enric Herrero, the main speakers at this year's edition.

Finally, the highlight of the evening will be the visit to the museum and other areas of the facility, ending in the great dome room, which preserves original elements of the observatory. There, the observation will begin with the 1904 telescope, one of the largest and oldest telescopes in Europe still in operation.

As for this season's observing sessions, you will have the opportunity to contemplate the craters of the moon; the star Albireo, the fifth-brightest star in the constellation of the Swan (more than 300 light years away); the three-star system 24 Coma with its characteristic orange star; or such impressive and well-known planets as Jupiter or Saturn.

A classic proposal for Barcelona's summer, where a splendid outdoor dinner and unbeatable views of the city will be combined with the possibility of discovering and observing everything that surrounds us beyond our atmosphere as you have never done before.