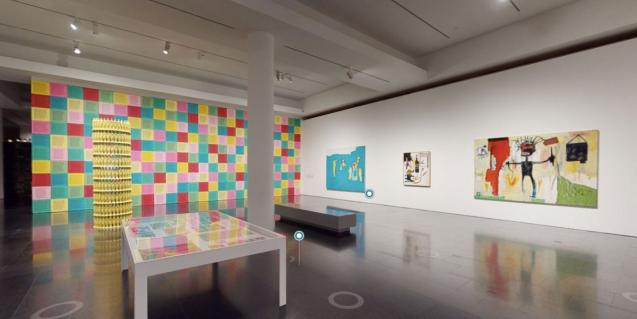 The MACBA's permanent exhibition offers a journey through the last century with the fundamental works of more than 120 artists.

Since the creation of the museum in 1988 and its inauguration in 1995, the MACBA has established itself as a reference point for contemporary art and thought.

The MACBA Collection brings together outstanding works by more than 120 artists in a narrative that will be updated periodically to enrich the nuances of the exhibition and highlight the plurality of the different approaches and discourses.

Through a chronological journey from 1929 to the present day, the exhibition emphasises the particular viewpoints that the MACBA Collection has developed since its early days. It is a story told from the perspective of Barcelona and its immediate context. That year, the city held the Universal Exhibition, with the German pavilion by Mies van der Rohe and Lilly Reich, and Josep Lluís Sert and Josep Torres i Clavé founded GATCPAC (Group of Catalan Architects and Technicians for the Progress of Contemporary Architecture).

The exhibition follows the most significant changing moments and experiences in art since then, from the transformation in the 1930s and its commitment to modernity to the involvement of the avant-garde in the Civil War, with Bauhaus artists such as Anni Albers, who visited the city, as well as Alexander Calder, Le Corbusier and Joaquín Torres-García.

It shows the first attempts at a cultural revival during the post-war period, the international explosion of the 1960s — with artists such as Erró, Richard Hamilton, Herminio Molero, Ronald Nameth, Claes Oldenburg and Evru/Zush — and artistic expressions such as pop, psychedelia and acid pop linked to pacifism, feminism, hippism and other proposals for social revolution. Minimalism and its legacy are also present with pieces by Rosemarie Castoro, Hans Haacke, Sol LeWitt, Àngels Ribé and Robert Llimós.

The artistic impact of the new social perspective introduced by the political identities in the 1970s and 1980s is explained with fundamental works by Jo Spence, Jenny Holzer and Jean-Michel Basquiat, while the last rooms focus on the art of the late 1990s and the first decade of the 21st century, which radicalises its critique of globalisation and neoliberalism and leans towards a more performative and collaborative action art as an expression of contemporary discomfort.

Tickets to the MACBA Collection are 11 euros and can be purchased in advance at this link. Every Saturday, the Avalancha collective offers guided tours included in the price at 6 p.m. (in Catalan the first and third week of each month, and in Spanish the second and fourth).

If you are interested, you can also take a virtual tour of the 11 rooms of the exhibition by clicking here.