Tuesdays to Saturdays from 10 am to 7 pm 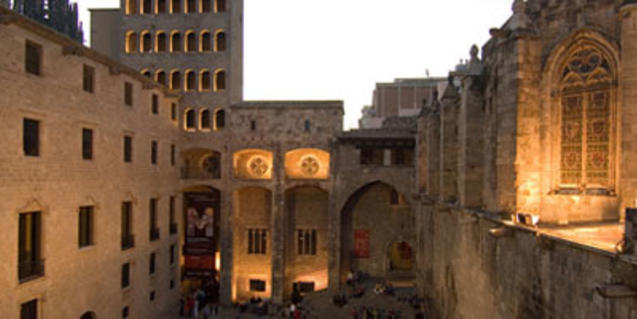 The monumental ensemble includes archaeological remains and buildings dating from the foundation of the Roman colony of Barcino to the splendour of the medieval city.

The 1931 opening of Via Laietana prompted the moving and reconstruction, stone by stone, of the Casa Padellàs, which used to be in Mercaders street, to a new location in Plaça del Rei. The foundation works of the building at the new location left out in the open the archaeological remains of a significant part of the old foundation of the Roman city, Barcino. The excavations that followed, in addition to the rebuilding of the Saló del Tinell, confirmed, in 1943, the suitability of transforming the Monumental Ensemble in Plaça del Rei into the headquarters of the Museu d'Història de Barcelona (MUHBA).

Its function is to conserve, study, document, spread and show the historical heritage and Barcelona's history from its beginnings to today. Nowadays, the MUHBA includes fifteen heritage sites scattered through the different neighbourhoods of the city.

In this case, the ruins that make up the Plaça del Rei complex date to the 1st century BC and go all the way to the early Renaissance, well into the 16th century, passing through the Visigothic Barchinona of the 7th century and the bustling mercantile and guild emporium of the 13th century. Other medieval civil and religious buildings, such as the Palau Reial and the Santa Àgata chapel, built in 1302 by Jaume II, complete the ensemble. Incidentally, the Saló del Tinell, inaugurated in 1370 by Pere el Cerimoniós, will be closed until October 15 due to the assembly of the next exhibition.

The visit to Casa Padellàs opens an underground door to the past that will allow the visitor to see the rectilinear road of the Cardo Maximo from 1,300 years ago, get close to the walls of the same period, enter a laundry, a dye factory and a salted fish factory from the 2nd and 3rd centuries AD, visit a 4th-century cellar or observe traces of the first Christian community in the city, which still has its baptistery, its church and part of a cemetery from the 4th to the 7th centuries, which were part of the episcopal complex. In the Palau Condal, there is a permanent collection with more than 200 pieces from the early Middle Ages. On the other hand, in the inner courtyard of the Casa Padellàs, there are temporary exhibitions dedicated to the modern and contemporary Barcelona.

Right now, you can go see Barcelona flashback. Kit d'història en 100 objectes, an experimental and radically innovative synthesis with a method of interrogatory historical reading through the best pieces from the MUHBA collection. Besides, until September 1, the antechamber of the Tinell is housing the exhibition Barcelona, port mediterrani entre oceans. El testimoni del vaixell Barceloneta I, which includes the shipwreck of the Barceloneta I, a 15th-century Basque vessel found during the excavations carried out between 2006 and 2008 next to the Estació de França, after having been restored by the Centre d'Arqueologia Subaquàtica and the MUHBA.

General admission to the monumental ensemble in Plaça del Rei and the exhibitions on display is 7 euros, while the reduced admission is 5 euros. In both cases, those are combined tickets that allow access to the rest of the MUHBA centres. You can buy them directly at the box office or book them by email at reservesmuhba@bcn.cat.