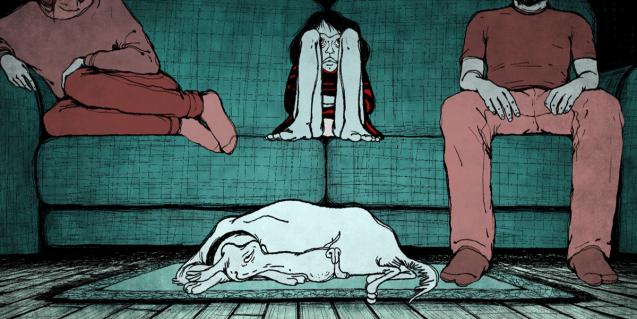 Zumzeig is programming a cycle of animated short films from all over the world in collaboration with Miyu Distribution.

Thinking of animation as a children's sub-genre is over. Cartoons have grown up! Dos Rombos is a cycle in which animation becomes impertinent and borders on the illicit to show its possibilities and narrative and formal richness.

Until 24 June, you will be able to see around 40 short films by artists from all over the world at Zumzeig. The sessions will be spread over five thematic days, from 7 to 8:30 p.m. The majority of the titles come from the Miyu Distribution catalogue and have been programmed by Miguel Español Celiméndiz with the help of the Zumzeig team.

The last session will take place on 24 June. It is called Furia Marika and celebrates queer and LGBTQI+ culture through six visions: The Dip, by Simona Me (United Kingdom, 2020); Friend of a friend, by Zachary Zezima (France, 2020); Tamou, by Tom Prezman and Tzor Edery (Israel, 2020); Carrousel, Maja Hehrig (Belgium and Czech Republic); Mr. Mare, by Toth Luca (France and Hungary, 2019); Purple Boy, by Alexandre Siqueira (Belgium, France and Portugal, 2019); and Tom has a plant, by Thinh Nguyen (Denmark, 2019).

All sessions will feature different guests according to each thematic axis. If you'd like to attend, you have two options: buy single tickets, or purchase a 25-euro season ticket for the whole programme at this link.