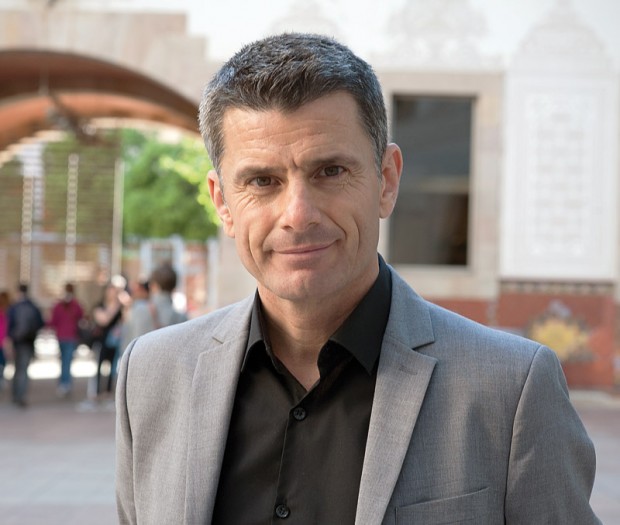 Pedro Olalla was born in Oviedo in 1966 and his restless spirit has taken shape in all sorts of formats and resources. He has written some 30 books, but also expresses himself through photography and cinema, and still has time to be a teacher, translator and thought agitator in lectures and debates that leave no one indifferent. He has the virtue of not beating about the bush. With a calm voice and a shy demeanour, it soon becomes clear that his thought rests on an immense cultural and humanistic background. He is regarded as one of the leading Hellenists of our time. He uses his profound and erudite knowledge of the thought and culture of ancient Greece to propose an often acerbic but always nourishing reflection on the present day.

He is so enamoured with that thought and its most lasting fruit, democracy, that he has lived in Athens for the last 24 years, and in his latest works he has set out to redefine basic concepts such as citizenship, politics and the idea of democracy itself, in order to rescue them from the perversion and the semantic disfigurement they suffer in the political discourse of today. In his books he invites us to think critically about our democracy and compare it with Greek democracy, “the only safe haven in the history of humanity where ordinary citizens had real capacity to decide about the common good and defend themselves against private interests and the arbitrariness of the powerful,” he reminds us. A very different situation from today’s degraded representative democracies, where “politics has been hijacked by economic powers.” Because, as he asks, “what power lies in the hands of citizens who can only vote every four years on the strength of the electoral promises of political parties that are under no obligation to keep them?”

Today, recovering the historical yardsticks of democracy may even seem subversive. “Athens discovered that political equality should be the way to offset economic inequality, and that a system can’t call itself democratic unless it aspires to a fair distribution of wealth,” he holds. Pedro Olalla likes to remember that Athenian democracy lasted longer than any of the current ones. In fact, the parliamentary democracies of today get their inspiration more from Roman republicanism than from Athenian direct democracy, “in which all citizens were called upon not only to debate and decide but also to govern and hold the highest posts in the institutions and courts, often by the drawing of lots.” 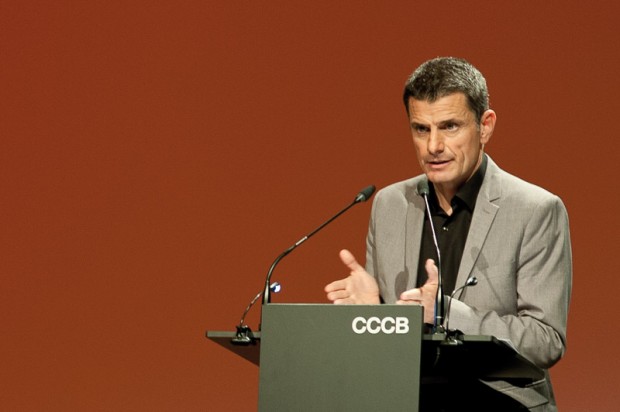 Olalla has visited Barcelona several times lately, most recently in May this year to give a lecture at the Centre de Cultura Contemporània (CCCB) on political maturity. He is one of the four European intellectuals involved in the project “Ageing Democracies?”, promoted by the CCCB and George Soros’s Open Society Foundation. This project postulated that the ageing of the European population might be at the root of the wave of authoritarian proposals, phobia against foreigners and nationalistic withdrawal that can be seen in Europe. Political scientists have analysed the electoral behaviour of people aged over 65 throughout Europe and their conclusion is clear: absolutely not. The senior electorate is no more conservative for being senior, and it is as plural and varied in its political options as the young electorate. Nor is it territorially homogenous. It depends on the history of each country. In no way do old people represent inflexibility and conservatism. This idea is a prejudice. The study has found that each generation tends to remain faithful to the principles and values adopted when they became socialised politically. This is why, according to Olalla, nurturing critical thinking through education is so important.

Rethinking everything, in the manner of the classics

His contribution to this project is a little gem (90 pages) that has just been published by Acantilado. It is entitled De senectute politica. Carta sin respuesta a Cicerón (On Political Old Age: Unanswered Letter to Cicero), a delicious reflection in epistolary format in which he talks of what it means to grow old, and it invites us to rethink everything, from how we experience the passing of the years to the big issue of the distribution of wealth. At a time when we often feel numbed by an excess of information and stimuli, stopping and thinking in the manner of the classics, as Olalla does, is a good way to try to think well.

European society is indeed ageing, because we live longer and the birth rate has plummeted. By the time those who are being born now turn 40, in Europe there will be more octogenarians than children under 15. But we are not taking it well. “Our societies,” warns Olalla, “have lost the capacity to think about old age without thinking of decrepitude. They don’t see ageing as an accumulation of experience, hindsight and wisdom, but rather as the decline of the supreme value of our culture, youth, which incidentally is something that is destined to disappear.” It is not merely a matter of adding years to life, but of giving life to years. Because, in the words of Galen of Pergamon, “the old man is not he who is aged, but whose faculties are diminished.”

However, “in order to have a good life it is not enough to be a good author of one’s own biography. One must be a co-author – and a good one – of the collective biography.” If society is ageing, does it mean that democracy may lose momentum? Not necessarily: “Growing old is not at odds with political virtue; a longer lifespan doesn’t explain moral deterioration or lack of solidarity. If our democracy is growing old, it’s because it’s stopped being faithful to its essence,” he writes in his letter to Cicero. “Today, Marcus, the world is not just older. It’s richer and more unequal too.”

In his book Grecia en el aire (Greece in the Air, Acantilado publications), Olalla thinks about these issues from the beleaguered Athens of today, as it cowers under the dictatorship of austerity policies decided far away. The route he takes through the most emblematic sites of ancient Athens serves as a guide for a reflection on the present. And he finds many more connections than we might think. Such as when he passes by the place that was once the Garden of Epicurus, in the quarter of Kerameikos. The Garden was a refuge of thought when the city was succumbing as a political project. When Athens failed to resist Macedonian rule after the death of Alexander, the dissident leaders were persecuted and a new order was imposed. De facto, if not de jure, this was the end of democracy as it had been understood until then. The change consisted in those without a fortune of 2,000 drachmas being deprived of citizenship; thus most citizens were stripped of their rights and the result was a return to the dynamics of inequality. Are we not suffering the danger of a regression in social and political gains today?

Nowadays it is very appropriate to remember, as Olalla proposes, that in its beginnings the idea of democracy was linked to the idea of keeping wealth and caste origin separate from political and decision-making power. One of the first things Solon’s young democracy did was to issue measures eliminating privileges and the pre-eminence of creditors over debtors, which made the latter so vulnerable that they were often deprived of their status as free men. Was this not the matter at stake in the discussion of sovereign debt in the European Union? Is this not what Greek society grieves over right now, Olalla reminds us, when it sees how the decision made by an overwhelming majority in a referendum serves for nothing because those who really decide are the representatives of the creditors? Pedro Olalla warns us that “progress retreats when we allow a few to take advantage of injustice and ignorance.” For this reason, he concludes, “one of the most urgent challenges is to regain control over politics and bring the legitimate power to create and control money back into the hands of society through democratic mechanisms of governance.”