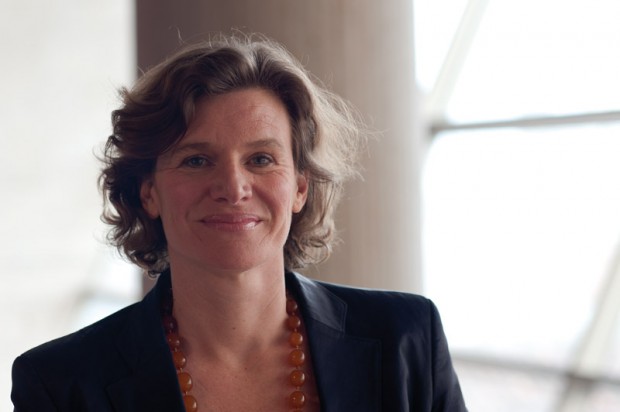 When we think of technological innovation, we conjure up an image of entrepreneurs locked away in garages, investing all their savings and expending all their creativity on a ground-breaking idea that will change the world and make them millionaires. In the era of storytelling, the story of innovation sold to us by the media, corporations and a certain political class has always been entwined with the virtues of entrepreneurship and the private sector, whose creative force is reined in by the state dinosaur and its cumbersome bureaucracy. We’ve often read things like “governments have always been incapable of taking the right decisions” (The Economist), an argument that inevitably ends up demanding that state involvement be limited to the absolute basics: setting out the rules of the game and leaving the field open for the ground-breakers and pioneers to run around in.

The thing that is overlooked by this mythology of entrepreneurs and garages – the garage that was the birthplace of HP, the Google garage, Steve Jobs’s garage – is that the success of companies like Apple would not have been possible without some big-time public funding behind it. From the Internet to GPS, from touchscreens to recent innovations like Siri’s voice recognition, all the technologies that have led to the iPhone, iPad and smartphones are the result of decades of state investment in innovation. Of course, the company has been clever enough to integrate them into a state-of-the-art architecture, but it is still very much part of the paradigm that no biography of Steve Jobs devotes a single line to the “little” bit of public help that allowed Apple to make a US $26 billion profit in 2011. These profits, although they are indebted to technologies developed by the CIA and the US Army, bring no returns to the tax-payer. On the contrary, what the company has really invested in is designing a sophisticated system of fiscal engineering that has allowed it to avoid paying taxes on the hundreds of thousands of devices it has sold in Europe.

But how can we challenge this narrative that glorifies the company and demonises the state? The David who is standing up to Goliath in this great discursive battle is Mariana Mazzucato. Born in Italy but brought up in Princeton, New Jersey, this Professor in the Economy of Innovation at University College London has made a name for herself in academic circles, debunking the big ideological myths about private entrepreneurship (indeed, her research on the public roots of Apple’s success is just one of her well-known case studies). Her highly acclaimed The Entrepreneurial State: Debunking Public vs. Private Sector Myths, book of the year at the Financial Times, has become the new global bible in public policy-making on innovation. And not surprisingly, she has been invited all over the world to advise organisations such as NASA, the European Space Agency (ESA) and Brazil’s Ministry for Science and Innovation. 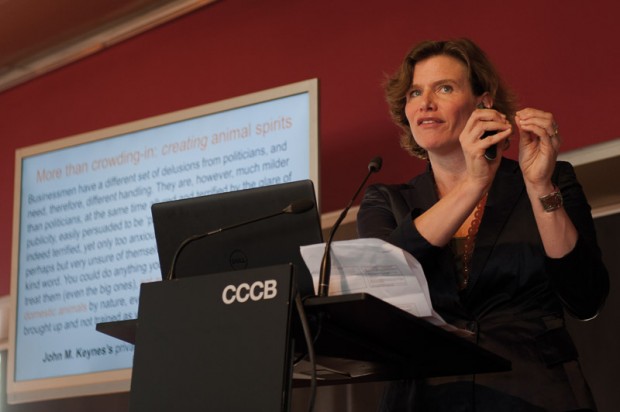 According to Mazzucato – in the photo, taken during a conference at the CCCB last April – the ability to take risks is what makes the State invincible in the face of business angels and start-ups.
Photo: Albert Armengol

Mariana Mazzucato was in Barcelona at the end of April, invited by the Centre de Cultura Contemporània de Barcelona (CCCB) and the Barcelona Initiative for Technological Sovereignty (BITS), for a lecture series organised by Evgeny Morozov on the impact of information technology on economics and democracy.

“Since the 1960s, we have been hearing a discourse that attacks the role of the state in innovation”, explained Mazzucato, who at the Mirador in the CCCB challenged the audience to try to turn the paradigm on its head, changing the vocabulary to bring about a mindset shift: “We need to move away from a state that facilitates the market to a state that is able to model and create new markets. Instead of letting the state simply level the ground for the market, why don’t we let it push it in different directions, for example by steering the economy towards green growth?” The numbers speak for themselves: economies such as the Danish one, which has been putting a gigantic effort into sustainability for years, are starting to reap the fruits in the form of million-dollar investments to export green technologies to China. “The countries that are leading the green revolution are those in which the state plays an active role in innovation”, says Mazzucato. This situation makes the Spanish context look even more tragic, where the government’s halting of renewable energy is one of those strategic errors that will go down in the annals of history. In The Entrepreneurial State she also refers to the example of the Brazilian Development Bank (BNDES), which by making high-risk investments in biotechnology and clean technologies has earned record returns on these productive, as opposed to merely speculative, investments: the rate of return was 21.2% in 2010. So what is the recipe for success? Daring to offer counter-cyclical credit and putting it into strategic industries where the uncertainty scares off investment from multinationals and risk capital.

Indeed, according to Mazzucato, it is this ability to take risks that makes the state unstoppable in the face of business angels and startups. For decades, the state has demonstrated that it is the only player in the system that has this unmatched capacity for expenditure, even in industries in which a cost-benefit analysis would advise against investing. “Even during a boom, most companies and banks prefer to finance low-risk incremental innovations and wait for the state to find success in the more radical areas”, she explains. And there are numerous examples of this: the massive investments that drove the latest biomedical and pharmaceutical revolution were not made by risk capital or garage inventors, Mazzucato insists, but by “the visible hand” of the state. “In 2012 alone, during the financial crisis, the United States spent US $32 billion on the biotech and pharmaceutical industries”, Mazzucato told El País. Huge public investments by the US that led to what is now Silicon Valley are a perfect example for Mazzucato, because Washington isn’t exactly accused of being socialist or of advocating too much state intervention in the economy.

According to Mazzucato, what the United States has traditionally done is to have a long-term view – which direction will the economy take?, where do we want it to go? – and to focus investments in a way that creates a symbiotic relationship with the private sector, not as an enemy or a competitor. “The state must be a partner to the private sector, and often the most courageous partner, the one that is willing to take on the risks that companies don’t want to take”, she points out. That said, once the investment brings returns, Mazzucato argues that the rules of the game have to change to prevent a socialisation of risk while profits always end up in private hands. This is especially true in a scenario that for decades has never seen GDP growth cascade down to actual wages.

Rethinking capitalism doesn’t mean asking for the moon. It’s just about fairness, says Mariana Mazzucato. This Italian economist ended her talk with a reference to the Apollo space programme: why don’t we develop great visionary projects like we did in the 1960s, like taking on the challenge of putting man on the moon? Back then, the state was able to design a colossal research project that brought together the work of different disciplines to achieve the impossible. Why don’t we launch an Apollo programme against climate change or against social inequality?