Hoare, once part of London’s punk scene, has found two channels for expression outside music: literature and the sea, with freedom as the common denominator. He gave a talk at the CCCB in September. 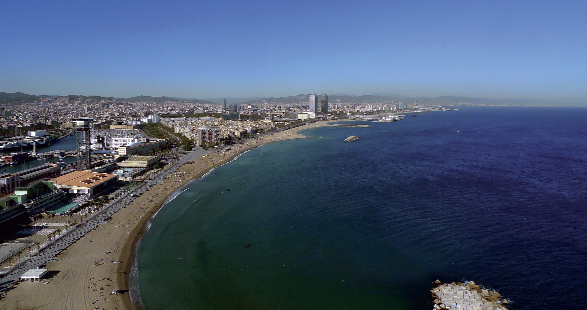 Barcelona’s seafront, with Passeig del Mare Nostrum in the foreground on the left-hand side of the photo, taken from the beach.
Photo: Vicente Zambrano

For millions of years, man has been transforming nature and adapting it to his way of living, in particular since our great advances in technology. We’ve called it civilization, and, generally speaking, we’ve associated it with the progress of our species. Our desire to dominate, however, is diluted when it comes into contact with the sea, an unfathomable frontier that separates human history from natural history. And yet, we cannot help but forge links with it. In Barcelona, one need only take a walk along the Passeig del Mare Nostrum to understand the great symbolic value of this relationship.

“In civilizations without ships, dreams dry up”, said Foucault. Maybe that is why British writer Philip Hoare (Southampton, 1958) defines the sea as “the soul of a civilization”: a space that defines us, connects us and divides us, both physically and culturally. It is “an element beyond us”, one that we cannot control, that occupies two-thirds of the planet and that is home, for miles below the surface, to 90% of our global ecosystem. And we have barely explored a tenth of it; in fact, we know more about outer space than we do about our own oceans. But while we barely know anything about the sea, still it nourishes us; we traverse it with our spirit of adventure and we write thrilling tales about it. And that’s precisely what Philip Hoare, author of The Sea Inside, does as he takes us on a literary voyage of discovery that fuses autobiography, scientific writing and cultural history.

Hoare, who was part of London’s punk scene in the Seventies, has found two channels for expression besides music and his favourite artists, David Bowie and Roxy Music: literature and the sea, with freedom as the common denominator. A freedom that allows him to use his creativity, to reflect on and to make us reflect on our relationship with the natural environment that surrounds us. When it comes to the sea, freedom is associated with hope and discoveries, with the connection between cultures and the pleasant nostalgia for the homecoming, but it has a parallel reality that is more sordid and has two facets that, sadly, are of much relevance today: pollution and the refugee crisis. It is the flip side of freedom: tragedy and terror.

The sea is a container. A grave. The indifferent witness to human and environmental disasters that simply reflects the paradoxical existence of rational beings; we who can bring together a refugee and a tourist, a dinghy and a luxury cruise ship on one Mediterranean island; we who can discard incalculable amounts of litter, plastic and chemicals into the water while passing laws to protect the animals that live in it. Hoare starts from the premise of the sea as a frontier in order to explain the dramatic situation of migrants and the problems of spilled waste: two issues that are of particular concern to major European maritime cities such as Barcelona, a Mediterranean capital, a cultural capital, an icon of integration, tourism and modernity and a metropolis that is open to the sea. Open, then, to a system based on a network of Mediterranean cities that cooperate to confront these situations with a humanitarian commitment that legitimises their open-door policy. A challenge and a duty that is becoming more critical than ever, in view of the unequal measures implemented by European States, particularly in relation to two obstacles that are difficult to overcome: borders and laws. 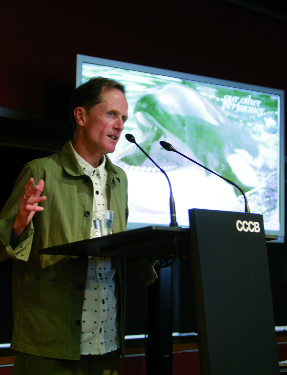 Philip Hoare during his talk at the CCCB in September 2016.
Photo: Miquel Taverna / CCCB

One cannot understand Barcelona without understanding its relationship to the sea. History, art and culture have been documenting it for centuries. And it is these three concepts that Hoare invokes to confront the vortex of power that seems to drive us to “civilize it” without taking into account the effects that this causes. This goes against the idea of the supposed “progress” that has been emphasized since the Industrial Revolution. Hoare, who came to Barcelona’s Centre for Contemporary Culture (CCCB) in September to talk about these issues and about his obsession with whales, finds a synthetic and metaphorical way to convey an optimistic message, in spite of the predatory ambitions of our species, in the form of two Romanticism paintings: The Raft of the Medusa (1819) by Théodore Géricault, and The Slave Ship (1840) by Joseph Mallord William Turner. He chose the former because the focus of the painting is the figure of a black person “acting as the guide”, and the latter because of the lack of a central focus; it is blurred, highlighting the immensity and power of the sea – of nature – that faces progress. It is art and culture, not as remedy, but as hope, as a collective conscience and, in essence, as what connects us. Like the sea.

But if we are to speak about connections, we must inevitably talk about whales, a symbol of our separation from the natural world and an icon of the submarine culture so distant from our own, descended from a more ancient species, with a matriarchal social structure and the ability to feel empathy. The whale’s sense of belonging is fluid, understandably so for a community that is constantly on the move. Hoare explains all this and yet, despite his passion for the sea, he says it with two feet firmly on the ground, basing it on scientific research that appears to prove it. Another unique characteristic of these cetaceans is their way of communicating to each other, by emitting varied and complex sounds that travel for thousands of miles through the water: “Jacques Cousteau wrote that the ocean was the world of silence. He couldn’t have been more wrong. Sound is the essence of the sea.”

On the other side of this water surface, the ocean’s skin to quote Melville, human history continues on its course, captivated by technology. Hoare emphasises this “conquest of the world” by means of civilization by citing the evidence of almost any wealthy society from our own century: “Without aeroplanes and computers, we can no longer exist. We are lost.” That is, indeed, the capricious nature of technology. But neither can we live without the sea: “Cities are born and grow because of the sea, because of everything it provides to feed themselves, because of imports and exports and tourism.” As is the case with Barcelona. And he underlines the significance with an expression that dates back to the Romans: Mare Nostrum, a sense of ownership that is palpable and yet illustrates a complex relationship of both domination and dependency. But this Mare Nostrum that we only barely know (in Barcelona, in Shanghai, in Buenos Aires or in Dubai), so beautiful and calm, is the most polluted place on Earth and is where thousands of people risk their lives in search of a better future. The ironies of progress.

Meanwhile, Mare Nostrum can also be our sea inside. An exercise in introspection in which we can submerge into ourselves and explore the emotions and fears we have or that surround us. Philip Hoare guides us back to the origins of our existence, to the sea that gives us the air we breathe and the food we eat, that transports our trade (more than 90 per cent of global trade) and that holds so many stories and as yet undiscovered fantastic species, even if we humans are like contradictions on legs. The sea is not our refuge, but neither is technology. Our refuge, our hope, is simply culture (art) – because it is what “justifies us as human beings” – and our awareness, in accepting the beauty and the uncontrollable rules of nature: “What would life be without risks?” asks Hoare. It would surely be the same as a civilization without ships, without dreams.