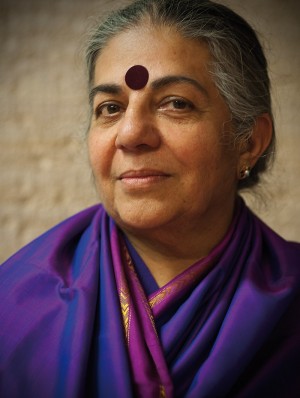 The ecofeminist activist Vandana Shiva, who visited Barcelona in January, suggests changing our current mental framework –oriented towards dominating the Earth– for another based on life and respect for biodiversity. She maintains that if we were to abandon the delusions of global technophile capitalism, we could reverse global warming within ten years.

On a sub-atomic level, the universe is in harmony. It’s no surprise that Vandana Shive (born in 1952 in Dehradun, in Uttarakhand state in northern India), an environmental activist and eco-feminist thinker who began her career as a particle physicist and a science philosopher, understands that the natural state of things is balance, and that the consequences of altering a self-regulating system are disastrous.

The Gaia hypothesis, based on the benevolence of Mother Earth, has ceased to be a myth and has become a scientific fact. Climate change is the result of human meddling in nature that is having and will continue to have a huge impact on the conditions that make life possible, and Shiva’s proposal to revert the catastrophe is simple: we stop trying to dominate the Earth and we begin to listen to what it tells us. Citing Mahatma Ghandi, the thinker reminds us that “the Earth provides enough for every man’s needs, but not every man’s greed.”

Last January, the conference hall of the Centre de Cultura Contemporània de Barcelona (CCCB) was packed with people eager to hear Shiva’s reflections on the role of humanity in a future marked by the environmental, economic, political and social effects of the current environmental crisis. In 2018, the author of hundreds of books such as Ecofeminism or Earth Democracy: Justice, Sustainability and Peace published Who Really Feeds the World? (North Atlantic Books), the result of her latest research. The intellectual solidity of her vision, together with the passion with which she transmits it, have forged Shiva’s global reputation, leading her to be called “a rock star battling Monsanto” or “the Mother Teresa of the environment”. From the stage at CCCB, Shiva showed that her years of contemplation and work have borne fruit in the shape of a growing number of people with a newfound awareness.

Rather than climate change, Shiva prefers to talk about climate chaos: “the concept of change makes it sound like a predictable and controllable shift in temperature. What we’re experiencing is a destruction of the systems that have made it possible for humans to exist over the past twenty million years.” What’s destroying these self-regulating processes? Our arrogance and stupidity, which have driven us to remove the fossil fuels nature has stored underground for more than six hundred million years. In just one year, our industrial system burns up over twenty million years of nature’s work, altering the natural carbon cycle. “We all learned about the climate cycle in school. It’s something very simple, but it seems that the ‘smarter’ the world around us gets, the easier it is for us to forget”, Shiva notes. According to the activist, this unbearable stress is degrading the planet’s mechanisms for absorbing carbon, and climate change –or chaos– is the “metabolic disease” that results.

The disruption of the carbon cycle goes way beyond environmental problems. Shiva sustains that almost all the conflicts currently underway in the Middle East are really about carbon. The fact is that in 2009, the desertification of Syria caused a million farmers to abandon their fields, and combined with the austerity policies of the Bashar Al-Assad regime, this gave wings to the warlords who sought to channel the resulting unrest, leading to the ongoing civil war. Also in 2009, when Lake Chad suffered from an intense drought, conflicts over water gave birth to the Boko Haram terrorist group. The list goes on, but Shiva’s research has brought her to the conclusion that, often, geopolitical conflicts that start with environmental crises “are disguised by explanations based on ethnic or religious conflicts because no one wants to acknowledge that the solution is environmental, not military.”

After years studying the origins of climate chaos, Shiva estimates that 75% of the Earth’s problems are related to how we produce food. People often say that the danger of industrial agriculture is the effects of chemical products on plants and the earth, but they forget that each and every one of the products used by the industry come from fossil fuels.

Our current agricultural system is based on petroleum products. It produces 40-50% of the greenhouse gasses emitted each year, consumes 75% of the fresh water on the planet, and is responsible for over 70% of soil degradation. The irony is that this massive use of resources hasn’t made the world more fertile; rather, by destabilizing its natural processes, it has caused the climate change that currently threatens our survival. 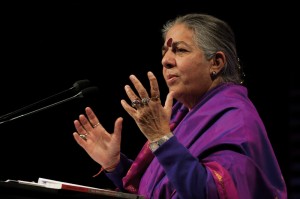 Shiva attacks the big chemical and food corporations for having inverted common sense on how to farm: “they told us that without chemical substances we couldn’t produce food”. She also explains that the current system is deeply inefficient, a fact that has been hidden by making us believe that efficiency only depends on the number of people doing the work: the more farmers you eliminate, the better. Paradoxically, according to Shiva, real efficiency is achieved by small, traditional farms such as those she has promoted as the founder of Navdanya, an NGO that works to protect biodiversity, ecological agriculture and the rights of farmers, and that has trained over a million farmers in food sovereignty and sustainable agriculture over the past twenty years. “While industrial farms consume ten polluting units to produce one unit of food, in ours nothing is lost because, just like in nature, everything is based on nature and everything gets used”, she explains. After twenty years of competition, on industrial farms the organic material in the soil has been reduced by 14%, while on organic farms it has increased by 99%.

Last year, Stephen Hawking declared that we can only survive one more century on this planet, and that as a result, we need to work on escaping from it. Elon Musk has talked about colonizing Mars. Vandana Shiva is sick of this male way of thinking: “they’re like children playing with their toys. When they start to break, they throw them away and buy another.”

The ecofeminism promoted by the author suggests replacing our current mental framework, based on the domination and instrumentalization of the Earth, for another based on love and respect for biodiversity. According to Shiva, if we do away with the delusions of the global technophile capitalist élite and we learn how to live according to the limits established by nature, in ten years we could reverse climate change. By returning to a sustainable way of growing food, the carbon in the atmosphere that is currently killing us would return to where it can provide us with life: to the soil. “This will work because we don’t have to do it all ourselves. There are billions of organisms that will help us, and all we have to do is tell them ‘thanks, here’s your part: our love in exchange.’”