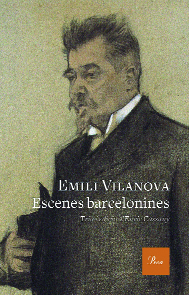 Don’t look for any gossip in this book, as what you will find is the humble day-to-day muted routine of the inhabitants of the Barcelona of his time, the second half of the 19th century.

The short story entitled Bèsties embalsamades (Embalmed creatures) ends like this: “Neither has anyone bothered to find out how the fiancé took the death of this creature, because the object of this little scene is to depict some types and not to upset the reader by recounting gossip.” The author, Emili Vilanova, alerts us to the features of the scenes of local customs that he describes: tranches de vie that are more like literary dioramas than actual short stories. So don’t look for any gossip (if that’s what you need, buy the magazine Lecturas), as what you will find is the humble day-to-day muted routine of the inhabitants of the Barcelona of his time, the second half of the 19th century. This is why Enric Cassany chose the title Escenes barcelonines (Scenes of Barcelona) for this anthology, the title of a different book by Vilanova published in 1886. Don’t get them mixed up – that can only end in tears.

In En lo balneari (At the spa; 1891), a rarity for Vilanova, we find his entire work in negative. In this story, he satirizes the well-to-do society that discusses things in Spanish and is as affected, prudish and pretentious as they come, so remote from the lowly people that he usually portrays. Born in 1840 in Barcelona, living on Carrer Basea, Vilanova always defended the low-born, the working people: simple, credulous, traditional, good-natured, far removed from the fashions and new customs of the modern age. Castilian Spanish starts to intrude into the daily life of Barcelona, where for decades it was only the language of soldiers, functionaries and the xanxes (the municipal police, known by a deformation of the typical Spanish surname Sanchez). In Reflexions d’un porter (Reflections of a Concierge; 1887), the concierge complains that in the entire building which he looks after in L’Eixample he is the only one who uses Catalan. In Perladillo (1889), he writes of an Andalusian man: “He’d heard of a famous capital where they live the high life [Barcelona] and where people who came speaking Spanish were more successful than the locals and were more in charge than anyone else.” For Vilanova, Spanish is “the language of the dominators who impose fines, tell us off, punish and charge us”.

Professor Antoni Vilanova (the writer’s great-nephew) explains this whole long-gone world expertly and in bit-size chunks in Emili Vilanova i la Barcelona del seu temps (Emili Vilanova and the Barcelona of his Time) (Quaderns Crema, 2001). Although Vilanova died in 1905 and the first house was demolished to build Via Laietana (then called Via de la Reforma) in 1908, the announcement of the disappearance of the streets he loved provoked despair and bitterness in Vilanova. In “En Parladé” (1891), Vilanova speaks very ill of the man behind the Reform, which he felt was due to “trivial turbulence in his private life, pathetic and mundane imbalances between expenditure and income and sometimes also to big passions, to excessive ingratitude, to an end of love or the spite and disloyalty of a fanciful, fickle woman?” “Because of the love of a woman”, as Julio Iglesias would say; this, implies Vilanova, is why Via Laietana was built. Anything is possible.

We find in Vilanova traces of Robert, Juli Vallmitjana and Narcís Oller. All four of them were masters at portraying the Barcelona that was leaving behind the peaceful life of a small, walled city, solitary and homely, and moving towards the uncertainties of the modern age.