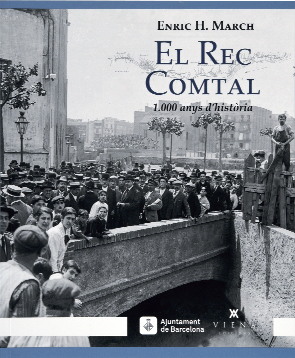 This book is very well documented and contains a selection of priceless photographs It also reminds us of how many traces still exist of what was once the city’s main water course. By following El Rec, the book guides us through a thousand years of Barcelona’s history.

In the prologue to this book archaeologist Carme Miró, who heads the Pla Bàrcino initiative to shed light on Barcelona’s Roman past, writes: “Barcelona is water. One cannot have an understanding of this city without water. Two rivers mark the city’s borders. To the north, the Besòs River; to the south, the Llobregat; to the east lies the Mediterranean and to the west, the Collserola hills, that supply so many gullies and streams”. The location of the Roman city and its long-lasting success can be explained by the abundance of water resources that allowed a population to grow and vegetable crops to be properly watered. This is the hypothesis of Enric H. March, a graduate in Hispanic and Semitic Studies. Initially expounded in his blogs on Barcelona Bereshit (enarchenhologos.blogspot.com.es) and Rec Comtal (el-rec-comtal.blogspot.com.es), such views can now be found in a book that is essential reading for anyone seeking a clear picture of the place in which we live.

This is not the first time I have talked about Enric H. March. I interviewed him a couple of years ago for the newspaper El País. When I asked for his opinion on the mediaeval irrigation channel, he answered that “it should be marked by a path of light that follows its route all the way to the archaeological site of El Born”. So this is his personal path of light, a guide that encourages us to discover a legacy that is still visible in certain corners of the modern city. March explains the trials and tribulations of the Comtal channel over its more than 12 kilometre journey. A great work of hydrological engineering – attributed to Count Mir – that brought water from the Besòs River to mediaeval Barcelona.

As the city grew, the channel (known in Catalan as el Rec) became interwoven into the urban fabric, making it possible to set up wool workshops, weaving mills and tanning factories. It also filled tanks and sinks and kept the drains working, in addition to ensuring the hydrological functioning of the plain of Barcelona, its mills, textile factories, industries and later its steam engines. The channel was then covered over, and in the mid-19th century the association of property owners was founded. The new Eixample district altered its route and private initiatives emerged, such as the water tower of the Association of Property Owners of Eixample, and Aigües de Barcelona (The Barcelona Water Company). The passage of time and the successive changes brought by urban expansion would later blur its features and doom it to oblivion.

The book rediscovers landscapes and images that many Barcelona natives will be unaware of. It is very well documented and contains a selection of priceless photographs (children fishing and chasing ducks in the channel, women doing laundry on the bank, bucolic views of its course). It also reminds us of how many traces still exist of what was once the city’s main water course: street names like Carrer de la Sèquia, Carrer del Rec and Carrer de la Sèquia Comtal; the old mill at Sant Andreu; the Casa de les Aigües on Carretera de Ribes; the sections that still have water and are uncovered in Vallbona; the Montcada mine and the bridges that crossed it, such as the one that was recently discovered by the Arc del Triomf and another that has been documented at Plaça de les Glòries. By following El Rec, the book guides us through a thousand years of Barcelona’s history.

One thought on “Liquid Barcelona”