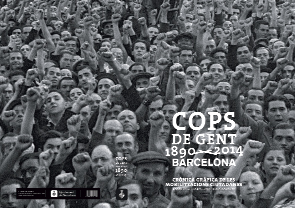 The Barcelona City Council has published an updated edition of the book Cops de gent. Crònica gràfica de les mobilitzacions ciutadanes a Barcelona (1890-2003), which it had co-published in 2005 with Viena Edicions. The new edition, with minimal changes, follows the same structure as the original version and expands it with seven new demonstrations that were held between 2004 and 2014.

It is the work of historians and archivists Roger Adam, Andrés Antebi and Pablo González, members of Observatori de la Vida Quotidiana, a prestigious team of sociology researchers that have published several works based on photographic images. The book’s print and design quality are impressive.

It offers a broad compilation of pictures of the major public demonstrations held in Barcelona from 1890 to the present. Included are photographs, press images, posters, calls to demonstrate, leaflets and other graphic materials. All these documents are accompanied by brief texts that provide a good explanation and place each of the forty-nine most significant demonstrations in the city’s history within the political and social context of their time.

You can follow demonstrations as important as the Catalan Solidarity demonstration of 1906; the Catalan Statute demonstration of 1932; the burial of the militant anarchist and trade unionist Buenaventura Durruti in 1936; the demo for the tramway strike of 1951; the demo to welcome exiled Catalan President Tarradellas on his return to Catalonia and the rally held on the Catalan National Day in 1977; the “No to NATO” protest in 1985; the protests against the ETA attack on the Hipercor hypermarket in 1987 and against the assassination of Ernest Lluch in 2000; the Dret a Decidir pro-independence rally in 2010; and the Via Catalana (Catalan Way to Independence) in 2013. The collection gives us a clear picture, from the number of events depicted, of Francoist-era restrictions: from that thirty-seven year period, only four demonstrations are mentioned, while in an equally long period, from the arrival of democracy until today, we find twenty-seven.

Demonstrations are a form of expression and a mobilisation of public opinion and they have been a vital part of 20th century dynamics and social change. As the book shows, the people of Barcelona have been particularly active in this regard and have rallied with notable frequency and intensity for very different reasons and with a variety of objectives. The mass mobilisations of recent years around the issue of sovereignty are rooted in a long tradition that began with the first workers’ demonstration of May 1, called by the Socialist International in 1890.

From a photographic perspective, the book is a historical testament of the city and its evolution that allows us to rediscover urban spaces – now transformed or disappeared – on a journey through the streets and squares where public demonstrations are often held. Another of this book’s merits is its insight into the history of photojournalism, a field in which the authors are highly specialised. It contains pictures by fifty-two photographers, a list that has increased considerably with the addition of the new generations that have photographed the social movements of recent years.

In summary, this is a key book when it comes to recreating one of the most public aspects of the city’s history.