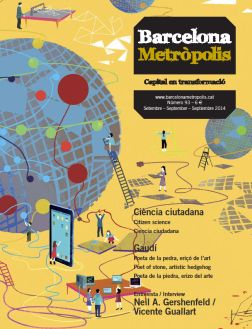 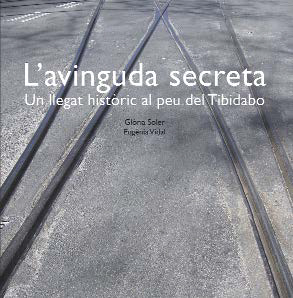 [The Secret Avenue. A historical legacy at the foot of Tibidabo]

The Mediterranean Sea and the mountain of Montjuïc have been part of the collective imagery of Barcelona’s inhabitants for centuries, but the hills of Collserola, fronted by the majestic peak of Tibidabo, did not become so iconic until the last third of the 19th Century, when the Cerdà Plan and the upper-middle class began to nudge the city outwards towards its natural limits, turning the neighbourhood of Sant Gervasi into the main thoroughfare to reach the mountain.

L’avinguda secreta. Un llegat històric al peu del Tibidabo is a journey along the avenue that connects Carrer de Balmes with Tibidabo. The old residential homes of Barcelona’s most opulent that line Avinguda Tibidabo are now houses of great architectural value, solemnly standing up to modernity in the midst of a cosmopolitan city. Glòria Soler and Eugènia Vidal present a mosaic packed with illustrations, documentary research and everyday stories that whisk us off to an era and a Barcelona that have been left behind.

The authors make the most of the first part of the book to place the Sant Gervasi neighbourhood within the specific historical context in which certain land and property developers belonging to the ostentatious bourgeoisie of the time set out to urbanise the city against the backdrop of the Cerdà Plan. The municipality of Sant Gervasi, at that time a cluster of vineyards and chapels nestling amid a bucolic setting, was the site chosen by the well-to-do for their second homes, and quickly became a springboard for the rediscovery of the hills of Collserola.

It was by no means an easy process. Initial controversies surrounding the development model to be implemented were compounded by the difficulties encountered by the entrepreneur Salvador Andreu in convincing the patricians of Barcelona to buy land that at that time was totally isolated, and in mediating in disputes about how to exploit a thitherto undeveloped natural terrain. The book reviews the plans and the newspaper reports that accompanied the development of the work, and how the civil and political stakeholders eventually turned the development of an avenue into a symbol of the metamorphosis not only of the city of Barcelona, but also of the mindset of the inhabitants of the Barcelona of the early twentieth century.

Avinguda Tibidabo soon became one of the epicentres of the recreational, festive and cultural activity of the Catalan bourgeoisie. The legendary Hotel Metròpoli, of which some period pictures are included, was perhaps the symbol of all that life, although it was not the only reference point. Different promoters organised car races and set up concert halls and music academies there, reflecting the artistic and sporting entrepreneurial spirit of the first few decades of the century. Moreover, the maintenance of the Empar de Santa Llúcia home for the blind was one of the main social activities carried out by a board of “meritorious ladies”. They are but token examples of the myriad vicissitudes to be discovered in this book, a must-read for lovers of the city and of the history of an oft-forgotten era.