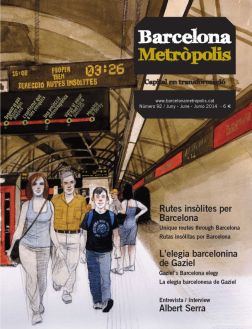 Passejades per la Barcelona verda is more than a photographic list of parks and gardens, and it is more than the usual collection of routes found in some tourist guides too. In fact, it is an invitation to experience the city, a tool for getting to know the everyday landscape in a different way.

The synopsis on the back cover puts the emphasis on discovery and secrets exposed, and the book certainly reveals some hidden treasures, even to the most restless. But what describes it best is the care with which it runs the magnifying glass over the least exceptional thing, the everyday of a city that is much greener than we no doubt assumed.

In one way Passejades per la Barcelona verda is an attempt to re­direct the city narrative and reassert it on a human scale, which is present in all its natural spaces. The twenty routes Muniesa has chosen wind through a varied city that is alive and where things happen. He made the right decision in avoiding the temptation to just do a naturalistic portrait. What we have here, aside from information on the environmental quality of these spaces, are lots of impressions of architecture, culture, sport, traditions, customs, technology and so on. The book invites us to slow down, all the better to enjoy an open route with multiple layers of information.

Xavier Muniesa has opted for a rapid, radio-style language that talks directly to the reader and makes him or her want to set foot in the city. It talks one-to-one and combines practical advice and useful information with erudition that is easy to digest, that allows you to read it quickly. You can tell the author has walked round each of the places described and that he enjoyed it. His texts detail the current use of these places, especially their link with a city that never stands still. Given this commitment to the present, it is also a portrait of Barcelona today.

Muniesa is a journalist who specia­lises in routes round Barcelona. He is the co-author of two other books published by the City Council (Barcelona hora màgica, which he wrote with Eulàlia Iglesias, and Barcelona, ciutat de teatres, with Carme Tierz), and he was the editor of Time Out in the early days. For a couple of seasons he also produced the programme De ruta amb Xavier Muniesa on COMRàdio.

Jordi Play was also a unique choice as his photographer. What makes his photographs interesting is their natural look, the joy with which they show people enjoying the city. They are of a very high quality and were taken with a clear perspective, avoiding overproduction and excessive filtering and treatment. So they tie in perfectly with what Muniesa wanted to give the book.

It has a very clear structure that is repeated in each section. This makes it easier to follow and reinforces its role as a book to be consulted regularly and quickly. The “Useful information” section summarises the places to visit, gives opening times and provides other useful information. Maybe it could do with bigger maps, though, and more interaction with virtual resources such as QR codes.

There are twenty routes set in seven big city areas. These routes take us from the coastline to Collserola, via Montjuïc, Ciutat Vella and bourgeois Barcelona, without forgetting northern Barcelona, where the book rightly claims the green spaces are a conquest by the people. A new park, a better life, is summed up by one of the routes. It is a perfect summary of the book.