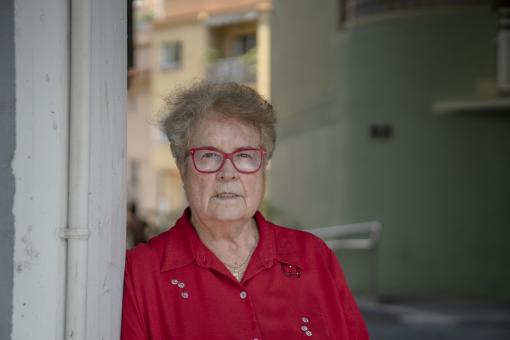 Cities don't just appear from a void, they are the product of the efforts of their inhabitants, who have often had to struggle to make their surroundings a little more habitable. This year, the opening speech is given by Custodia Moreno Rivero, someone who has been involved in that struggle. She is an activist, feminist and local leader who, among other things, worked towards the disappearance of Carmel's last shanty town.

Custodia Moreno Rivero was born in Granada in 1943, but she was so young when she arrived at Estació de França station in 1947, aboard the famous Sevillano train, along with her parents and her twelve-year-old brother, that she hardly remembers anything about it, other than the interminable journey and the terrible cold she experienced when she reached the city. Like so many others, the family had been the victims of a swindle and had rented a flat in Barcelona... where three other families were already living. They had no alternative but to move into one of the shacks on Carrer de Raimon Casellas (the “Del Santo” shacks, so named because of an image of the Sacred Heart, which still exists), one of the shanty towns that were being built in Carmel and Can Baró. At that time, there were only about twenty shacks, but over the years that number rose to nearly 550 for the whole area, built without any kind of urban planning or basic services. There may have been more opportunities in Barcelona than in the towns or cities they came from, but the living conditions of those migrants were not easy.

For example, in the shacks where Custodia lived, there was no sewer system, just a bucket for their needs. There was no electricity, just candles or carbide lamps, and there was no running water other than the spring. It is not surprising that, as they had to live in squalid conditions belonging to another time, long before the mid 20th century, the inhabitants of those precarious shacks thought more about living in the present than the future. There were therefore very few local men (and even fewer women) from those neighbourhoods that managed to go to university.

Well aware of her status as a woman, Custodia knew that she wanted to improve her life, and that her destiny could not be working as a hairdresser or waiting for a Prince Charming to rescue her... or enslave her. Therefore, when she was 14 years old, while she was working as a clerk in Clínica Barraquer, she started to study upper secondary education in the evenings, and once she got her certificate, she graduated in nursing at the Nen Déu university school. She had to wait until her family was asleep before starting to study by candlelight, in a bedroom that also doubled as their dining room.

Moreover, between classes, the young nursing student protested for her rights and those of her neighbourhood, where she was already well known because of her decided activism, demanding the basic services that all other city residents enjoyed. From 1968 onwards, she was involved in neighbourhood struggles, promoting sex education and information about contraceptive methods for Carmel women in the 1970s. After she married, in 1972, Custodia moved from the shack to a self-built house that her parents had been building in Carmel at the weekends.

In 1971, she heard the then Mayor, Josep Maria Porcioles, promise that within a year, there would be no more shacks left in Carmel. But the shacks remained there for many more years, although in 1974, when Custodia was the chair of the Carmel Local Residents Association, the neighbourhood was connected to the sewer and water systems.

The promised disappearance of the neighbourhood's last shanty town had to wait until November 1990, when Mayor Pasqual Maragall called local leaders and the press together and personally wielded a large sledgehammer to begin the demolition of one of the last shacks remaining on Carrer de Francesc Alegre. However, the neighbourhood still lacked services and many local-resident demands had not been met. With the agreement of local-resident associations and those that she had already worked with, Custodia became an independent district councillor for Horta-Guinardó, on the PSC lists. She later became an independent councillor in Maragall's candidacy for the City Council and lastly, commissioner for the comprehensive development of the northern area of the District of Horta-Guinardó.

Now retired, she remains committed to the local, social and political issues she has always fought for. She has continued to defend the rights of local residents, as well as the memory of the shanty towns and of all the people who struggled to improve the living conditions of their inhabitants. In 2009, she was awarded the Medal of Honor of the City. She had earned it on her own merit, but it was also a recognition for everyone involved in the struggle who, during the dictatorship, managed to overcome their initial fear and then demand solutions to their everyday needs, as well as promoting social and political changes that have made today's Barcelona a fairer city.