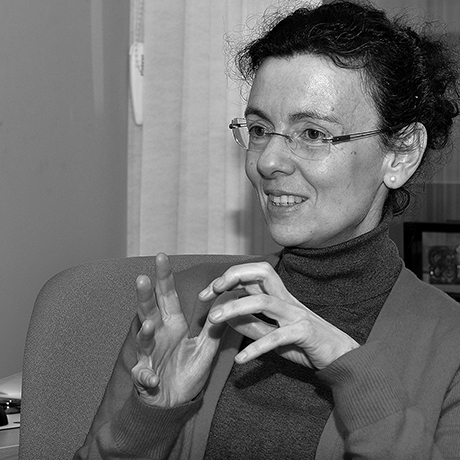 Begoña Román Maestre is a professor at the School of Philosophy of the University of Barcelona, where she obtained her doctorate in 1993. She is the president of the Ethics Committee of the Social Services of Catalonia and a member of the ethics committees of several health centres.

The space we inhabit, the environment that surrounds us, shapes our behaviour and everything about us: our character, our ethos. That’s what ethics is about. It isn’t just about contractual obligations, it’s mostly about ligatios, the ties that make up the networks within which we narrate our lives.

Aristotle is well-known for having said that we’re political animals because we live in cities, and because outside of the polis we’re either beasts or gods. Here, he used the expression zoon politikon; however, in referring to a specifically human conscious life he used the expression bios theoretikós—contemplative, thoughtful life, beyond common life alongside other living, metabolic organisms. The Greek world accepted that we were naturally social and rational; in other words, interdependent and tied to our words.

With the appearance of modern philosophy, with the contractualism of Locke or Hobbes, individuals make up the city and organize their coexistence through contracts. The conditions of these social contracts involve equality and mutual benefit; that way, individuals who are mutually interested in maximizing their security and property through strategic rationality establish the terms of the pact. Here, there’s no room for dependency, things given free of charge, or the hospitality of welcoming those incapable of contributing “useful” things to the city, as much as they may want to. At most, those left out of the pact can “benefit” from charity or compassion. As 21st-century citizens of the global village and heirs of the Age of Enlightenment, we’ve believed in the anthropology, sociology and economy involved in such an agreement as though they were essential (if not naturally then culturally, but universal nonetheless). As a result, we’ve seen ourselves as Hobbesian mushrooms that emerge, fully formed, as adults, almost by spontaneous generation, as self-sufficient beings that owe nothing to anyone.

A city that cares for all three of the spheres that individuals need (love, law, solidarity) is essential, so that individuals can feel that they have a place and develop their abilities, their power to be and to do, without schisms between public and private. Everything has its influence, everything is interconnected, we’re all interdependent.

Contemporary philosophy has provided magnificent critiques of this anthropology, sociology and economy. Either this rational, perpetually self-interested, independent individual without flesh, bone or roots, stripped of context, simply doesn’t exist, or we’re creating them performatively ourselves, assembling a human being that’s alien to the human condition. Such beings have no connections, they only have contracts. They have no ligatios, no ties, and their only obligations (ob-ligatios) are the result of a cold calculation of convenience. When such an individual has problems coexisting, they bring out all their legal artillery (in the appropriate bureaucratic networks) to force compliance with merely legal rights and obligations.

Communitarians, feminists, and postmoderns have also convinced us that the development of the individual depends on social sources. Spatial or temporal coordinates are transcendental to us as humans: they’re our condition of possibility. The circumstances constitute us, and our identity is structured narratively. We need to be sheltered by a city, with a language and a tradition where we start out more as actors with a pre-existing plot than as the autonomous authors of our own stories. We humans can’t live out in the open, we can’t survive on our own.

The space we inhabit, the environment that surrounds us, shapes our behaviour and everything about us, our character, our ethos. That’s what ethics is about. It isn’t just about contractual obligations, it’s mostly about ligatios, the ties that make up the networks within which we narrate our lives. In the words of Aristotle, “where friendship exists, no legal justice is needed.” The city isn’t a simple circumstance, something we can capriciously do away with. And, if it becomes such a thing, instead of hospitality we encounter hostility and tension because we have nothing in common, and in indifference differences aren’t recognizable. All of this complicates the social cohesion needed to carry out the project of searching for a good life, however each of us may imagine it.

In psychologist George Herbert Mead, Axel Honneth finds the empirical corroboration of Hegel’s philosophical idea: social conflicts can be understood as a struggle for recognition. According to this theory, the healthy development of an individual requires three spheres of recognition. The first is the sphere of love; this is where the social basis of self-confidence is generated, as a result of the loving relationships provided by those close to us, those that accept us unconditionally and shelter us as the necessary subjects we are. They especially do so in the first few years of our lives, and whenever we lose our balance (when our health fails us, or we run into other problems). In this sphere close to home, we all have a place, a position in our lineage; we’re all someone in our family tree. In this, we’re all the same: born of a mother, with a language spoken to us with which we narrate our lives, with a name that identifies us and a place of origin that we haven’t chosen. It’s worth repeating: we aren’t animals that live out in the open, we need shelter. We’re mammals, we require bonds of affection, human contact; we have roots and we need them to flower (to evoke Aristotle once again): when such things are absent, we wither away.

Cohesion is always an unstable balance with two basic dimensions: everyday life requires stability, peace and routine, along with dynamism, rhythm, development and adaptation. Since we can’t go it alone, we need to trust one another. And trust isn’t blind, but it also isn’t simply contractual, with strategic rationality.

According to Honneth, we can’t see ourselves as the holders of rights if we aren’t aware of our obligations to others. The second sphere of recognition is legal; it shelters the individual as an equal citizen with the freedom and the responsibility to participate in the public domain. Here, the individual is recognized as having rights, feeding the social basis of self-respect. The third sphere of recognition involves solidarity. In it, communities that share values and projects value differences—not just private, particular things, but the singular, unique traits of each individual, their specific abilities. This is where the bases of self-esteem are forged.

When one of the spheres of recognition are missing, the person’s development is severed. However, this personal fracture is also social. As a result, a city that cares for all three spheres is essential, so that individuals can feel that they have a place and develop their abilities, their power to be and to do, without schisms between public and private. Everything has its influence, everything is interconnected, we’re all interdependent. No matter its per capita income, a city is no good if its spheres of recognition fail.

This isn’t easy in our large, multicultural, morally plural and fast-moving cities. In them, it’s worth practicing what Seyla Benhabib refers to as “interactive universalism”, which is neither abstract nor generic.Cohesion is always an unstable balance with two basic dimensions: everyday life requires stability, peace and routine, along with dynamism, rhythm, development and adaptation. Since we can’t go it alone, we need to trust one another. And trust isn’t blind, but it also isn’t simply contractual, with strategic rationality. It has to do with affection and affectation, with wounds and violations of the other, the individual who always surprises us precisely because they’re different and don’t fit in.

Instead of a maximalist investment in utopias, or a naïve attempt with celebrations of spring, instead of continuing to measure our welfare through maximum numbers of people, perhaps it would be more prudent and humble to invest in not humiliating others, in being aware of the always-precarious balance involved in fighting precariousness. Here, it’s worth bringing back John Rawls’ contractualism, the principle of difference based on solidarity: those with the greatest advantage in the biological/social lottery shouldn’t enjoy the benefits of this lottery if we don’t all benefit.

The difficult thing about open cities is having to welcome the other in the absence of the friend/enemy dialectic. The convenience of differences —without common aspects impregnating everything with a static homogeneity where, eventually, no one can recognize themselves— demands a focus on what’s exceptional, what doesn’t fit in, so that no one feels excluded and so that we find ways of discussing an adequate response for those that are affected. Cities that apply interactive universalism are constantly under construction, promoting times and places for gathering where deference for difference, a symptom of freedom and creativity, is configured through respect for the enabling conditions of the human city: the endless conversation and the overriding obligation to fight against the avoidable suffering of exclusion and oppression.

We need another understanding of human rights

The global world we inhabit isn’t yesterday’s world, it isn’t the same world it’s always been; we need another way of understanding human rights that’s humbler, one that intones the mea culpa. Above all, people’s everyday lives are organic life: without it, we can’t think; but once we can all think together, we need to rethink (think about once again, intensely) the new figures of exclusion and suffering we’ve condemned to not be one of “us”, turning down the other that calls out to us from the foot of the walls we’ve put up once again.

We need to bring back concepts like civic friendship or fraternity to change the structures that consolidate exclusion through legal, symbolic and structural violence and that don’t address the root cause of the doors and gates that they put into place. Of course, paying attention to new forms of exclusion in our global village forces us to rethink how we design our cities, their basic structures, their institutions, their spaces, but also how we design our mentalities, so that they’re open to the differences that appeal to our convictions. That’s what responsibility is about: taking care of those that are vulnerable, being aware of our ability to harm and be harmed, even inadvertently.

An open city is a fraternal city, in solidarity with the everyday lives of all its people. Beautiful things are simple, but achieving simplicity often requires a great deal of thought about action: all of this is very far from the simple conclusion that nothing can be done, because these things have always happened. Cities have often been walled in to defend their limits. Thinking about limits also means thinking about possibilities; but no one is more than anyone else, we’re all the same and yet all different. Thinking about limits is about thinking about paradoxes, about constant foundation; as Hanna Arendt said in referring to birth, starting over, as something specifically human.

Begoña Román Maestre is a professor at the School of Philosophy of the University of Barcelona, where she obtained her doctorate in 1993. She is the president of the Ethics Committee of the Social Services of Catalonia and a member of the ethics committees of several health centres.