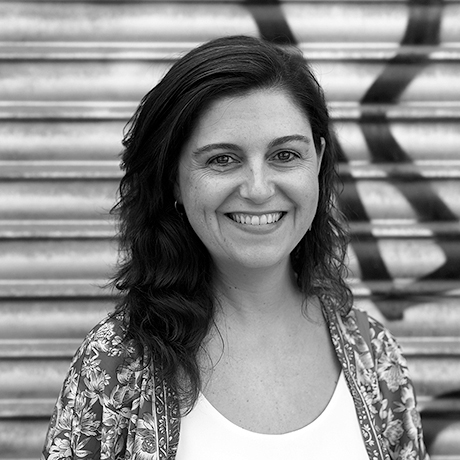 Tània Juste (Barcelona, 1972) Writer, graduated in History from the University of Barcelona.

In 2014 Tània Juste launched L’hospital dels pobres (The Hospital of the Poor), published by Columna. This choral novel is set in the early years of the 20th century, during the construction of the Hospital de la Santa Creu i Sant Pau. Here the authors explains to us why she chose this story, the bond she formed with the hospital from then on, and how it changed her vision of the city.

“If the hospital were taken away, it’d change Barcelona’s soul.” The first time I read those words, written by Doctor Josep Cornudella about the Hospital de la Santa Creu i Sant Pau, I was about to embark on a new literary adventure that was to bring me to know and love even more – it that were possible – the city where I was born.

A few years ago I challenged myself to write a choral novel with a cast of characters who revolved around the construction of this magnificent hospital. I had a strong hunch that its walls – those of the old building in Carrer de l’Hospital and those of the splendid modernista complex that gave it refuge in the early 20th century – concealed stories, human relationships, professional milestones and a whole series of snippets of our history that were crying out to be dusted down and shared. I was warned by the archivist of Sant Pau, as soon as I started my historical research: “It’s easy enough to find your way in, but the hard bit will be how to get out.” And she was right, because for months I lived amongst old documents that narrated the lives and deaths of all the generations of Barcelona people who lived before us. Who hasn’t got a grandparent, a great-grandparent, a parent or a brother or sister who is emotionally close to Sant Pau, or indeed feels that way herself? The hospital is part of our history, but it’s part of our soul too.

The Hospital de la Santa Creu i Sant Pau is a titanic endeavour that our forefathers took on just on the brink of the 20th century. This was a generation that wanted to leave the bad old days behind, to break out of the Barcelona of the epidemics, the unsanitary conditions of a working class that occupied all the beds of the old hospital, a generation that managed to overcome the limitations of an antiquated medicine and ring in the modern world, through new discoveries and new practices.

At the end of the 19th century the Hospital de la Santa Creu lay dying within the old mediaeval walls of Carrer de l’Hospital: after five centuries taking in the city’s poor, orphaned and insane, and of old also its lepers, it had become a maze of corridors, small poorly ventilated rooms and wards packed with up to four rows of beds as a result of a population that had multiplied. The surgeons had to take turns to use the only two operating rooms, and life – or rather, death – mounted up in a slow, tense wait while the new century edged closer.

However, Barcelona could boast a wealth of talent and pioneering spirit. The city was home and workplace to a host of scientific, medical, artistic, political and business figures who were determined to put the hospital of the city’s poor at the forefront of Europe and – why not? – the whole world. Characters like Doctor Robert, linked to the hospital and the city through his work and his passion, had no doubts about what had to be done to make sure that the heart of Santa Creu would never stop beating: they needed a new building, but not just any building, nor on just any site. It had to be a place that would signify progress, scientific advancement, the utmost expression of the frame of mind of a people, a city and even a country; a hospital complex that would welcome the new century with its gaze fixed firmly on the future. All that was needed was for the stars to align in favour of this great project in order to make it come true. And that’s exactly what happened.

Still now, after paying so many visits to the modernista complex, I can’t help stopping halfway up the steps that lead into the Administration Building, the first to be built by Lluís Domènech i Montaner. There stands a sculpture that many people perhaps walk straight by, but it portrays the man who made it possible to get the project for the new hospital underway: Pau Gil was a Catalan banker who lived in Paris and died four years before the turn of the century, leaving a large part of his fortune for the construction of the large hospital that he wanted for Barcelona, along the lines of the large hospitals to be found in the rest of Europe. A visionary, and a great opportunity for the gentlemen who administered Santa Creu. It would take a long time to recount all the impediments that arose, all the battles that had to be fought to bring together Santa Creu’s needs and Pau Gil’s wishes; to cut a long story short, they succeeded, and thanks to that today we can enjoy in our home city the largest modernista complex that exists anywhere in the world.

At the end of the 19th century the Hospital de la Santa Creu lay dying within the old mediaeval walls of Carrer de l’Hospital, after five centuries taking in the city’s poor, orphaned and insane, and of old also its lepers.

The complex was planned as a hospital city, which Domènech i Montaner conceived in the form of independent buildings, each for a particular pathology or function, interconnected only by kilometres of underground tunnels that led to the heart of it all: the Surgery Building. A plot covering the equivalent of nine Eixample blocks on the lower slopes of the Muntanya Pelada, which in those days still lay outside the city and was a destination for Sunday outings for many Barcelona folk, afforded the ideal site for the ambitious project. It was a dream drawn in ink by the master architect, made of grand avenues, landscaped gardens and wards built on a human scale where light poured in and the walls were decorated with all the artistic wealth inherent in modernisme. “Don Lluís” (Domènech i Montaner) was convinced that curing the sick was not only about the medical treatment they received, but that the process also involved other factors such as light, colour, fresh air and a beautiful garden.

When I started my historical research to write L’hospital dels pobres I visited the de Sant Pau Historical Archive, which was temporarily housed in premises lent by the Cathedral Chapter behind the cathedral. It was a provisional home for that great sea of documents, a place that preserved its written history while the last patients were transferred out of the modernista buildings of the Hospital de la Santa Creu i Sant Pau – which we had always known as a working hospital – and the restoration work began for its artistic and heritage conservation. It was the second time the hospital’s heart was transplanted from one building to another, on this occasion to meet the new needs of the 21st century. And just as the old mediaeval building was given new life thanks to the Library of Catalonia, which has taken care of filling halls once occupied by patients with books and valuable documents, the modernista complex in turn closed its doors temporarily to citizens in order to freshen up and show off all its original beauty.

It was then, as the restoration work on the modernista buildings progressed, that my intimate relationship with them began. For the first time in my life I wasn’t going to Sant Pau to visit a patient; I wandered amidst the scaffolding and workers in their white overalls or their protective jackets and helmets. This was a privilege I enjoyed even more intensely during the last stage of my writing, when the Historical Archive of the hospital had returned to its former home, the Administration Building, which shone with all the splendour and the colours of its first day. At daybreak or with the last rays of the afternoon sun, my brief strolls became as curative as they must have been for all those patients in turn-of-the-century Barcelona who, in awe before such artistic and chromatic beauty, wondered if they were in a palace instead of a hospital.

Alone after an intense day’s documentation or writing on my novel, I would stop in the middle of the central avenue and contemplate everything around me. Then I could see with absolute clarity the architect walking between the half-built wards; I could imagine the sculptors, ceramists, mosaicists, stained glass window makers, painters and carpenters lining the future hospital with art; and then I could see the doctors moving their services into the new buildings, the brothers and sisters hospitallers organising the beds and putting everything in place, the first patients, the families coming to visit them. Real faces, like the pioneering Doctor Robert, who never lived to see it, Domènech i Montaner, the sculptors Eusebi Arnau and young Pablo Gargallo, veteran physicians like Doctor Freixas, Enric Ribas and Manuel Corachan, and the young, ambitious Josep Trueta who came to play such a crucial role in the Civil War: they all filled the pages of my novel and lived alongside the fictional characters.

Later on, the gates of the modernista complex opened again to the public and today it is a place where culture and art beat. Where convalescing patients once sought the shade of a tree, where doctors performed veritable feats of their time, where so many families experienced the happiest and also the saddest moments of their loved ones’ lives, now there are concerts, literature readings, lectures, exhibitions and activities of all sorts that show us that the complex is still ours and seeks its eternity through the same language with which it was created: art. The voices of past and present blend together to make a combined symphony that talks about us and everyone we have loved.

Tània Juste (Barcelona, 1972) Writer, graduated in History from the University of Barcelona.