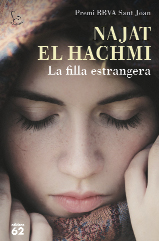 El Hachmi had already recounted her experience in two earlier works. While El Hachmi dealt mainly with a relationship with a father in The last patriarch, in La filla estrangera she focuses on a mother-daughter relation ship.

Najat El Hachmi has the merit of having introduced a new point of view to Catalan literature, and even, I would say, to Iberian literature as a whole. El Hachmi has emerged as a unique voice, capable of explaining the experience of the new Moroccan community in our city. Unlike other literary traditions, the Catalan tradition has not segregated a postcolonial literature – for obvious reasons – although globalisation and new migration have made it possible to integrate multiple identities and new perspectives in a literary society that would have otherwise ended up spiralling into a very ethnocentric viewpoint. Authors from around the world who are based in Barcelona – such as the Englishman Matthew Tree, the Czech Monika Zgustova, the Afghan Nadia Ghulam and the Frenchmen Gregoire Poulet and Mathias Enard are, together with Najat El Hachmi, some examples of authors whose work has offered the world a window onto Barcelona.

El Hachmi had already recounted her experience in two earlier works. In her novel The last patriarch (Ramon Llull Award winner), shook literary society with a story that was unsettling – both due to the world that emerged for the first time in our literature, as well as for the story’s literary effectiveness. While El Hachmi dealt mainly with a relationship with a father in The last patriarch, in La filla estrangera she focuses on a mother-daughter relation ship. The author tells the story of a girl born in Morocco, who was transplanted and brought up in a city in inland Catalonia, as she enters adulthood and struggles to become independent of her mother. She maintains a loyal but unhealthy relationship with her mother, with whom she speaks a variant of the Tamazight language. Educated in Catalan, the novel’s protagonist lives straddling two languages, which eventually turn into the field of negotiation between two worlds, a field of forces that not only affect the girl’s social environment.

The great strength of La filla estrangera is the equidistance the author maintains between two worlds and two cultures that overlap without ever becoming identical. El Hachmi unsparingly depicts the prejudices and atavism of the Moroccan community, but also the narrow-mindedness and paternalism with which the Catalans have addressed African immigration. There is no good or bad here. Everyone struggles to be who they are and gets it wrong when judging others. La filla estrangera is, in this sense, proof of the importance of the novelistic genre for understanding the complexity of identity and transforming readers’ views.

The question raised by La filla estrangera is: “What should I be, in relation to my origin?” In Vic, the protagonist finds a society that is welcoming enough that it enables her to become integrated. Her experience, however, will end up turning Vic into another extension of her maternal prison, and she will be forced to break free and move to Barcelona.

For the protagonist of La filla estrangera, the big city becomes a space of liberation, after the years of imprisonment living in Vic or suffocation living in Morocco. “I remember walking without stopping along huge streets and being happy to know the infinite city,” she confesses. El Hachmi explained in an interview that “there is a big difference between living in the provinces or in a big city. The big city is often seen as a release, but that’s not always the case. Immigrants arrive and settle here grouped into communities that already come from their home countries […] That’s why there is still this oppressive social control experienced by the protagonist.”