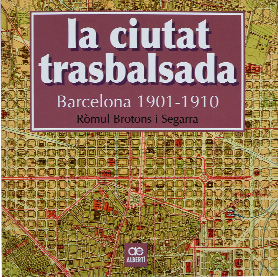 This book presents the turbulent history of the first ten years of the 20th century, which were to guide Barcelona into the modern age.

Following La ciutat captiva (The captive city, 1714-1860) and La ciutat expansiva (The expanding city, 1860-1900), Ròmul Brotons i Segarra presents the turbulent history of the first ten years of the 20th century, which were to guide Barcelona into the modern age. La ciutat trasbalsada gives us a year-by-year chronicle of the city through the events that were to influence the social and political evolution of a metropolis that grew out of the demolition of the medieval walls (1854-1873), the planning of the Eixample (1859) and the annexing of nearby villages (1897), and that with the Universal Exposition of 1888 set out to put itself on the map of great European cities.

Brotons presents his information with meticulous care, going over the urban development of the city and the main historical events that took place in it, using maps, graphics, newspaper illustrations and cartoons, advertisements, photographs and old documents. All these materials help to build up a story that is both educational and journalistic in style and that reads like a narrative that organises and explains the history of the first ten years of the last century. With the arrival of new industries, technological advances, new inventions and electricity, the turn of the century was full of the promise of a better life for the people of Barcelona. But it was not to be.

Following the disastrous loss of the Spanish colonies in 1898, the government was surviving, but with a discredited monarchy and an outdated system of political parties that took turns to be in power. In Catalonia, with an economy that was subjected to abusive levels of fiscal pressure that stopped it from growing, and a culture under attack from every side, the outlook was bleak. The reaction to this state of affairs took the form of a strengthened Catalan nationalism and anarchism, the emergence of modern republicanism, anti-clericalism, feminism and the rise of working-class consciousness, while at the same time the populism of Alejandro Lerroux, leader of the Radical Republican Party, was taking hold and there was unprecedented social and political conflict that put citizens under constant threat of bombings, military intervention and a state of war, leading to the Tragic Week (1909), the burning of monasteries and the execution of Ferrer i Guàrdia, anarchist and creator of the Escola Moderna school.

Despite all this, the city continued to grow at a break-neck pace. The Eixample spread, the Via Laietana was built, Horta was annexed (1904) and with the new Avinguda del Tibidabo, the population spread to the Collserola hills. The festival of La Mercè became well-established and the bombs did not stop people from having fun. While the working classes took over Avinguda Paral·lel, an avenue increasingly full of theatres and funfair stalls, the upper classes frequented El Liceu, the city centre theatres and the racecourse at Can Tunis which, after falling into disuse by the end of the decade, was turned into the space in which the first aircraft flight was demonstrated (1910). Those years also saw the first amusement parks at Tibidabo and the American Park, and an emerging passion for sports like cycling, racing driving, sailing regattas, swimming, tennis and football.

The city ended the decade without the noise of falling bombs and fighting, growing both spatially and economically despite all the obstacles and the scandalous actions of the Lerrouxist majority at the City Council. On the horizon were the cosmopolitan Barcelona of the Great War, the Expo of 1929 and the proclamation of the Republic. But all that will be explained by Ròmul Brotons in his next books.