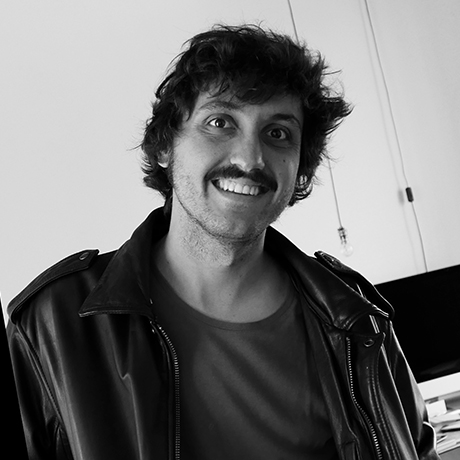 Jaume Coscollar Casamayor is an architect.

The exhibit A Certain Darkness can be seen until January 5 at the CaixaForum. It’s a collection of artwork and documents that constitute a diverse reflection on how we see or don’t see images, on their cult value and exhibition value. The exhibit’s starting point is the robbery of the Mona Lisa from the Louvre in 1911.

A hunger for images, a voracious desire for images, restless ocular gastronomy. It’s about swallowing —or rather, enoculating— everything we’re presented with, and digesting it as quickly as we can. The radical cult of the present has led us towards a weightless reality, with no thickness or obverse. We’ve spread our stress throughout our range of vision. We expect immediacy from experience, and we expect whatever is on display to provide us with direct access to whatever it references. We forget that images are fleeting apparitions, and vision becomes a simple mechanism for identification. The laws of the market dominate: in order to increase in value, we need to increase visibility. We want to see before purchasing, and we pay to be seen. Give me a vantage point, and I’ll sell the world!

At the entrance to A Certain Darkness, on the first floor of the CaixaForum over on the right, there’s a photograph of the wall in the Louvre where the Mona Lisa hung at the start of the 20th century. More precisely, the photograph was taken at the end of August 1911, soon after Vincenzo Peruggia made the painting disappear. A little to the right, there’s the Elegy Joan Brossa dedicated to Leonardo da Vinci in 1998.

The feeling is that the works on display are only visible in how they attempt to hide themselves. It’s as though their purpose was to make us see, rather than to show us.

The photograph is printed in black and white, blown up so that objects displayed are almost life-sized. At the centre of the image, between two half-paintings cut off by the frame, four unused hangers sit in a row. The picture is fuzzy, making it even more phantasmagorical. A stain of dark pigment descends from the hangers; perhaps it’s a shadow, you can’t tell the difference. The outline of the absent painting, slightly smaller than its neighbours, can still be seen. The naked stretch of wall, robbed of its artwork, shines in a gold-tinged light. Witnessing the capricious disappearance of the image is disturbing, especially when presented to us in the apparently static form of a photograph. The Mona Lisa isn’t really there; nevertheless, some element of it survives in the image. It’s so absent and luminous!

On a stand at a height of ninety centimetres and a half sits Joan Brossa’s Elegy to Leonardo da Vinci, the author of the piece starring in the previous photograph. The black case of a compass sits open and empty on a prismatic base of polished, white, light-veined marble. The effect of the chromatic contrast between the two elements is blinding. Within the case is the cushioned relief of the geometer’s tool. In spite of the surgical neatness of the composition, its tragedy can be felt. It gives the impression of a great deal of density in such a trifling object. The entire Cartesian imaginary, luxurious and aristocratic, is presented to us with the volatility of nostalgia. Brossa celebrates it like a precious museum piece.

In spite of their diversity of formats and authorships, the other pieces share with the aforementioned two the same aloof character, a certain darkness… The feeling is that the works on display are only visible in how they attempt to hide themselves. It’s as though their purpose was to make us see, rather than to show us. This assumption takes on a paradoxical, almost humorous tone alongside a photograph by Martin Parr from 2012 at the end of the exhibit. In the foreground, we can clearly see the screens of three mobile phones. They’re held aloft by three of the many anonymous tourists that snap pictures of the Mona Lisa in its current location. The star painting sits blurry in the background. If you look carefully, you’ll see that the person on the right really has their hands full. While they take pictures on their phone, they perform a balancing act to keep hold of the museum map. In spite of everything, the image has a tinge of resistance. In spite of everything.

Curator Alexandra Laudo and her team deserve to be congratulated for their excellent job. Their good taste and great care can be perceived here and there, from the pieces selected to the texts composed. It’s a carefully woven exhibit, although the connection between the different pieces may not seem evident at first glance. It includes Éloge de l’amour (2001) by Jean-Luc Godard alongside El lloc i la data (1991) by Perejaume, Christo’s project to cover the Columbus Monument in Barcelona (1984) in front of Sobre el sobre (1988) by Joan Brossa, or the entry Les yeux from Arxiu F.X. (2001) by Pedro G. Romero in the antechamber of Visual Strike (2012-2015) by Ira Lombardia, among others. The neighbourhood of pieces is surprising, and the dialogue among them is constant. Imagine the din when eyes are absent and the space is free of visitors! It’s a rare sort of exhibit. Plus, we can examine it in detail without leaving exhausted; it’s just the right size.

Jaume Coscollar Casamayor is an architect.