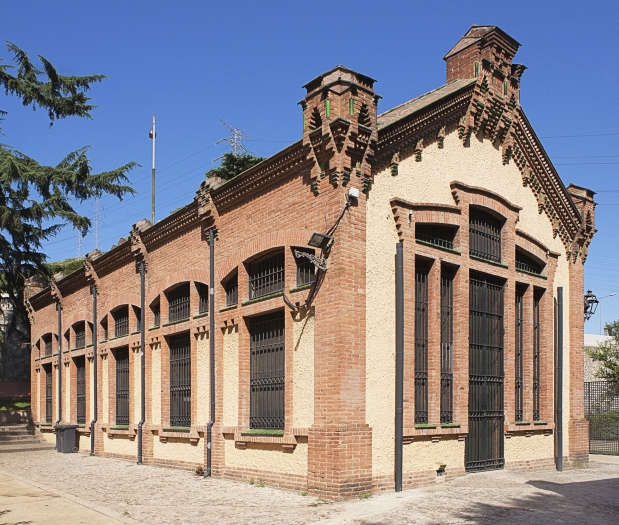 Casa de l’Aigua at Trinitat Vella was the water elevation station for Barcelona’s municipal water supply system. It was built between 1915 and 1919, the year when it began to operate. After the typhus epidemic which hit the city in 1914, which caused many deaths due to water contamination distributed by the municipal company, there was an urgent need to renovate the drinking water supply system.

The new system was designed by the municipal engineer Felipe Steva i Planas in 1915, and was made up of a number of aboveground installations and underground pipes. The system was fed by water from the mine and wells of Montcada, which was pumped – using the water elevation station at Trinitat Vella – to the reservoir at Trinitat Nova, where it was chlorinated. From there, it was piped (by means of gravity) to Ciutat Vella and Barceloneta. This system remained in operation until 1989.

At present, this installation is in the process of being adapted for public viewing by MUHBA and the Sant Andreu and Nou Barris districts, in collaboration with local social and cultural organisations. The aim is to open up the main installations to the general public (including Trinitat Vella elevation station, Trinitat Nova reservoir and the pipes that connected these two installations, and then continued on to the city), and to help visitors understand the complex task of supplying water to the city of Barcelona. The permanent exhibition The water revolution in Barcelona. Running water and the modern city, installed in the main underground gallery, shows the different strategies and systems used for supplying water to the city from Roman times up until the present day.

"The water revolution in Barcelona. Running water and the modern city" exhibition booklet

40. Supplying the city: water distribution and use

41. The water revolution in the contemporary city

Previous reservation is necessary for groups and schools.

The entrance is at Casa de l'Aigua of Trinitat Vella. The visit is not possible in the reverse direction.