The pacifist response must come from the people, but it must also be global and it is here that the role of cities will become ever more significant. Violence will not only be instigated between nations in conflict but also from within our major urban centres. 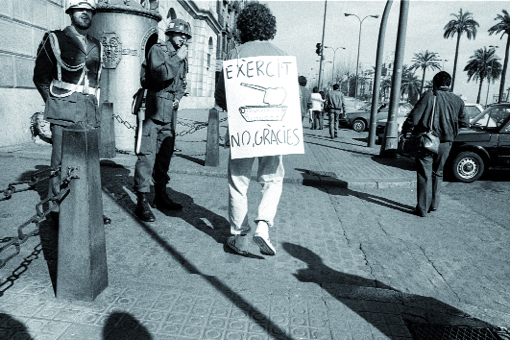 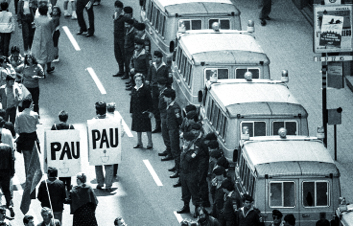 This year marks the fortieth anniversary of the founding of Barcelona’s centre for peace Casal de la Pau, where the pacifist activities of the 1980s were hatched and which a decade later led to the “No” campaign in the referendum on Spain’s membership in NATO. Today, we shall weigh up the present, the past and the future of the culture of peace. What does it mean to be a pacifist today?

The wars of today are not what they once were. Western nations feel powerless in the face of new forms of violence that are unpredictable and uncontrollable. War could break out in a remote province of Asia or in the underground carriage that’s taking you to work.

Until now, wars have been administered by nation states. And that is why pacifist movements have always been at odds with the government bodies that have promoted military values to defend a demarcated area of sovereignty. Citizens of the western world no longer feel that the integrity of their nation state is under threat, but they do see a threat to the security of their lives in their homelands. Today’s European is not setting out to win a war. He or she just wants to avoid or postpone a disaster.

During the cold war, the military were seen as the escalators of a perverse arms race that could only lead to destruction on a global scale. Now, though, they are seen by many citizens as a peacekeeping force that we send to faraway armed conflicts to ensure the stability of the world order. While anti-Francoist activists were filled with indignation at the suspension of the rule of law during the dictatorship, now many citizens are willing to live in a permanent state of emergency deemed as necessary to control the flows of migrants across our borders. We face a worrying scenario. The democracy we dreamt of put full citizen’s rights above national identity or one’s ethnic or cultural status. The model of a pluralistic and inclusive democracy is giving way to the establishment of large zones of exclusion. 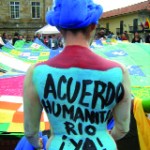 So what does it mean to be a pacifist today? What role do peace movements have in this new and very disconcerting context? Present and future peace will not only be defined as the opposite to military conflict, but also as the opposite to the broader notion of catastrophe. The shock waves of remote wars that reproduce like spores, spreading their effects far and wide, reach us in the form of terrorist attacks or waves of migration. The pacifist response must come from the people, but it must also be global and it is here that the role of cities will become ever more significant. Violence will not only be instigated between nations in conflict but also from within our major urban centres.

Social imbalances can lead to the insurgence of the excluded and the discontented. A clash of cultures or the devastating effects of climate change will sorely test our peace, with outbreaks of violence that we can’t foresee but for which we must be prepared. The devastation of New Orleans after hurricane Katrina was not just the result of a natural disaster, but also the consequence of the breakdown of a social order which led to looting and lawlessness.

But peace cannot be reduced to a simple question of public order and security; that would entail renouncing our own practice of peace and turning all responsibility for it over to the authorities. We cannot leave the matter of peace in the hands of the police. The culture of peace must plan for all these challenges so that the imminence of disaster is not used as an excuse to maintain the status quo. 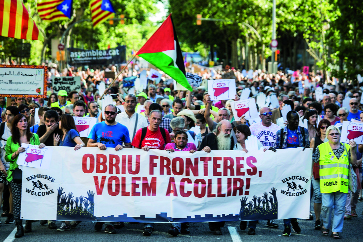 The demonstration held in Barcelona in support of refugees on 19 June 2016 under the slogan “Open borders, we want to welcome”.
Photo: Pere Virgili

As Slavoj Žižek says in his book Violence, “If one were to open the borders, the first to rebel would be local working classes. It is thus becoming clear that the solution is not to ‘tear down the walls and let them all in,’ the easy empty demand of soft-hearted liberal ‘radicals’. The only true solution is to tear down the true wall, not the Immigration Department one, but the socio-economic one: to change society so that people will no longer desperately try to escape their own world”.