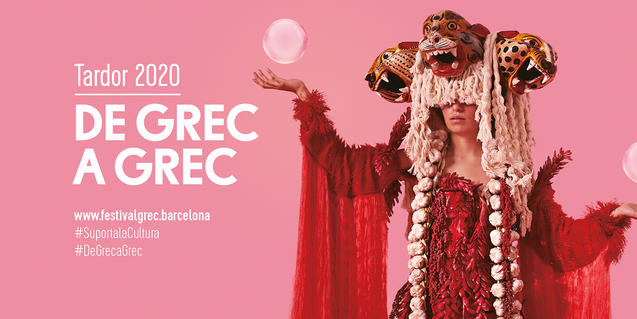 The initiative will enable shows to première over the next few months at various halls and venues, shows which could not be seen this summer because of the health emergency and its associated restrictions.

This September sees the opening of De Grec a Grec, the Grec Festival’s commitment to extending the festival and ensuring that everything that had been prepared for months but which could not be seen due to the health emergency can finally reach the public during the 2020-2021 season. De Grec a Grec will continue right up to next July and includes some thirty productions, mainly theatre shows that have been co-produced by the festival itself, featuring big names from the national and international stage.

The initiative opens the way for essential-viewing shows and offers a breath of fresh air to halls that have been indispensable collaborators in this year's programme and which have suffered severely from the consequences of the health crisis.

The first offering is “Escenes singulars” [Unique stages], eight stage events organised by Coincidències specifically to be performed in various venues in the Poble-sec neighbourhood. Also part of the Terrats en Cultura [Roof Terraces in Culture] season, it opened on 16 and 17 September with “¿Y después?” starring Belén Maya and Fernando López. The other productions can be seen on 2 and 3 October.

The first première of De Grec a Grec will be playing on 23 September. It is called “Winnipeg”, and will be on until 18 October at the Teatre Akadèmia, directed by Norbert Martínez and written by Laura Martel. An ode to hope and a cry against oblivion, recalling how the poet Pablo Neruda and Chile’s Minister of Foreign Affairs, Abraham Ortega, opened the country up to over 2,000 Spanish republicans in exile.

And still in September, on 26 and 27 and as part of the La Mercé Festivities, you can see “Gran Reserva”, from Rhum & Cia. Here, its clowns gather together the best moments from previous shows and perform them on stage at a frantic pace, stirring the audience's love for madness and the absurd, while closing off its more rational and boring sides.

Later in the year, from October on, there will be other productions such as Nelson Valente’s “Els gossos”, Denise Duncan's “El combat del segle”, Aina Tur's “Una galàxia de luciérnagas”, and Juan Rulfo, Mario Gas and Pau Miró's “Pedro Páramo”, among many others. A good part of the projects have to do with the original theme of this year's festival, the Latin American stage; which is why they either touch on related issues or have been cooked up by venues, directors and authors from either side of the Atlantic.

The full programme is available on the De Grec a Grec website.