Thanks to municipal leadership and the work of neighbourhood representatives, the regeneration of Ciutat Vella, which got under way in 1980, has successfully tackled the problem of urban desertification that has affected other European city centres. 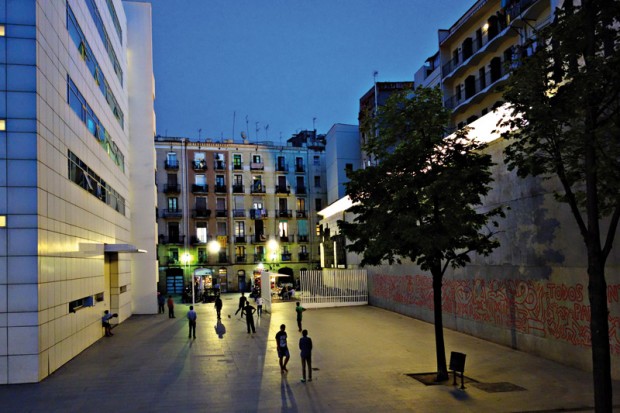 Today, about 115,000 people live in Ciutat Vella, as opposed to the 7,400 residents of the City of London or the almost 17,000 people who live in Paris’s first arrondissement. In the picture, Plaça de Joan Coromines, behind the Museu d’Art Contemporani de Barcelona.
Photo: Vicente Zambrano

How much is a square metre worth? That depends. On the light it gets, on how well the windows shut, on whether or not it’s got parquet or has been repainted, on how far it is from the metro, on how lively it is, on the personal connections with the neighbours and finally on the renter’s ability to get a discount on the price asked on the internet. It depends on almost anything. These are acceptable and quite parametrisable questions that are related to the location of the flat and its design. It is a waste of time to try and regulate such human issues.

From the point of view of public action, we can work to make all neighbourhoods equally attractive: decentralise public spending, incentivise businesses to set up everywhere and generalise the frequency of public transport. From the point of view of design, property developers should be obliged to build houses to last, using local materials, with large, multi-purpose rooms and with frontage that respects the urban landscape to provide square metres with a high added value.

What shouldn’t the value of a square metre depend on? On the public money spent on doing up the surroundings and even less on public grants for building maintenance or improvement. Investment in building shouldn’t be a reason for landlords to pass on the increase in value to tenants, and it would therefore be a good thing if a condition for grants was who capitalises on the surplus value. Rehabilitating a street calls for not just an engineering plan, but also a study of the ownership structure and legal and financial measures to distribute the costs and benefits of the urban transformation more equitably. 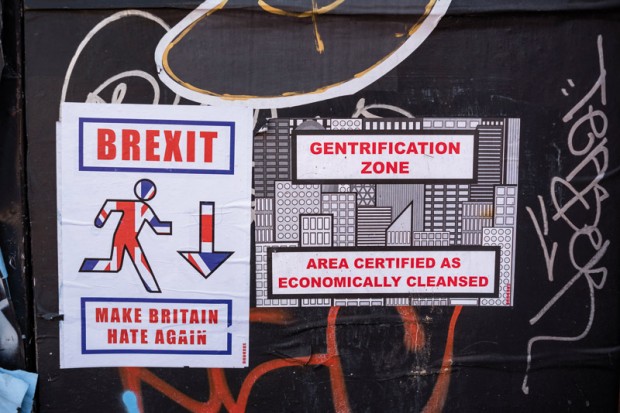 Political posters in London’s Liverpool Street, among them one protesting against the gentrification affecting the city centre.
Photo: Dani Codina

But one thing above all that its price must not depend on is the expectation that the city is a safe investment. With the circulation of global capital and the financial explosion, some investors have opted for selective purchasing of assets in attractive cities such as London, Paris, Venice or Barcelona. Without living in the flat or, in some cases, without ever setting foot in it, as time goes by the property appreciates in value. There is no risk, because without tenants there is no wear and the residents take it on themselves to keep the neighbourhood working and improve it day by day.

When Cerdà drew up his plan, there were about 160,000 people living in Ciutat Vella in very crowded and unhealthy conditions, with unacceptable death rates, especially in the traders’ and workers’ neighbourhoods. A hundred years later, with the Eixample established as Barcelona’s new bourgeois neighbourhood, the precariousness of Ciutat Vella was accentuated; in the 1950s the population reached the figure of 255,000 inhabitants and the old owners of properties, houses and palaces divided them up to let them as minute dwellings. At the end of the dictatorship, teams of experts led by Narcís Serra and Pasqual Maragall set themselves the target of regenerating Ciutat Vella while maintaining the bulk of the population, but in decent living conditions.

Martí Abella describes this in great detail in Ciutat Vella. El centre històric reviscolat. There was everything to do and there were very few resources. From 1980 to 1984, the lack of funds did not stop them working steadily to draw up a plan of all-round interventions that embraced town-planning, social welfare, public safety, business and mobility. At the same time, the Spanish government’s Decree 2329/83 institutionalised government backing for private rehabilitations and facilitated access to funds to promote rehabilitations in both the public and private spheres. Under the political leadership of Mayor Joan Clos, with the technical ideas of the Vilanova-Paricio-García-Tatjer team and the executive management of Pere Serra, a four-year plan of action was drawn up that drove operations around Santa Caterina (the market and accommodation for rehousing), La Maquinista, La Barceloneta and the stretch between the Liceu and the Seminary.

In 1988, the municipal company Promoció de Ciutat Vella was set up, with public and private capital. Thanks to a considerable public investment by the City Council, the equivalent of 10 hectares of land was replanned (buildings were expropriated, demolished and built) and work was undertaken in 279 streets, 61 squares and 2 parks. Four hundred buildings were bought and 3,000 housing units were built which were used to rehouse neighbourhood residents. No building land for private residential developments was created and the only hotel promoted was a leasehold venture in the Rambla del Raval. In view of the results, it could be argued that thanks to municipal leadership and the work of neighbourhood representatives, the regeneration of Ciutat Vella has successfully tackled the problem of urban desertification that has affected other European city centres.

The year I was born (1981), Ciutat Vella had 116,000 inhabitants, the population was elderly, incomes very low and unemployment rampant (up to 30%, of which 18% was long-term). Today, about 115,000 people live in Ciutat Vella, as opposed to the 7,400 residents of the City of London or the almost 17,000 people who live in Paris’s first arrondissement. One of the challenges is that the residents who played an active part in the regeneration should stay in the district and not move away so as to let the flats they own at a higher price. The price of a square metre in Ciutat Vella is also in their hands.

Today, about 115,000 people live in Ciutat Vella, as opposed to the 7,400 residents of the City of London or the almost 17,000 people who live in Paris’s first arrondissement. In the picture, Plaça de Joan Coromines, behind the Museu d’Art Contemporani de Barcelona.