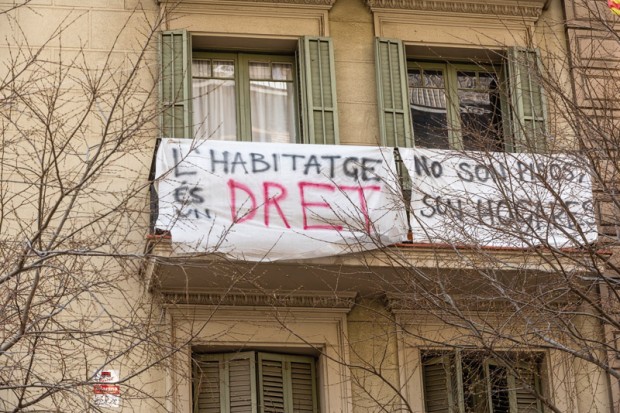 Gentrification has to be seen as a ‘particular form’ of urban segregation that causes involuntary displacements caused by a mismatch between housing prices and income levels.
Photo: Dani Codina

The most gentrified areas of Barcelona are the neighbourhood of La Ribera, Vila de Gràcia, Poble-sec, Sant Antoni and the area around the Rambla del Poblenou. This is the result of a pioneering study by Barcelona City Council’s Oficina Municipal de Dades (Municipal Data Office), which, in view of the absence until now of figures and indicators, has for the first time located the problem and has established a pioneering method of analysis with which to plan prevention policies. Màrius Boada, the office’s director, explains, ‘Our aim is to gather as much information as possible on the causes and consequences of this phenomenon, which is so difficult to explain, so as to be able to analyse where it happens and, what is even more innovative, to anticipate it’. According to Boada, the data allow us to draw up a complex model to measure the process of substitution of one population by another with a higher income, one of the main consequences of gentrification.

Precisely to avoid ideological approaches that might contaminate the whole analysis, the Oficina Municipal de Dades has opted to approach the study of this phenomenon from the point of view of its consequences rather than its causes. ‘There are no standard academic procedures for measuring the causes. The reason for this void could be the existence of ideological discrepancies and of particular interests. On the other hand, measuring the consequences is more obvious and less questionable’, says Boada in its defence.

‘Measuring gentrification isn’t at all easy’, says Oriol Nel·lo, a geographer specialising in urban studies and regional planning. The main stumbling block this analysis comes up against is the complexity of a process that does not allow generalisations, added to the absence of an academic methodology and the lack of data and indicators.

Gentrification, according to Nel·lo, has to be seen as a ‘particular form’ of urban segregation that causes involuntary displacements caused by a mismatch between housing prices and income levels. These are the two main factors that favour it, factors which, in turn, are also very difficult to determine, because in the particular case of the minimum income, ‘there’s no breakdown of figures’ by very small areas, which are precisely what we are studying. As regards the speed at which gentrification takes place, this is linked to the tenure regime of the housing, a ‘basic premise’ for measuring something affecting two social groups: those who rent and the young people who want to enter the housing market. According to Nel·lo, in those areas where rental contracts are short-term, the process by which one population displaces another ‘can be quicker’, because prices vary over a short space of time. ‘In our case, gentrification processes are slower, as more than 80% of families are owner-occupiers’, explains Nel·lo, who is also a Professor at the Autonomous University of Barcelona.

A second factor that decides the speed is what is called the ‘rent-gap’, which means that gentrification is faster the bigger the difference between the current urban rental income and the potential rental income. At the same time, according to Oriol Nel·lo, it is also very important to see what proportion of the housing stock is intended for tourist use, because according to the geographer, ‘if there’s a lot of seasonal tourist accommodation, it’s unlikely that gentrification will be applied to the whole of the built stock’.

The property market, key to the analysis

The Observatori Metropolità de l’Habitatge (Metropolitan Housing Watchdog) is the institution responsible for providing all the figures for the property market to generate a study methodology. ‘Our mission is to fill in the gaps in the information for data that either don’t exist or need to be improved’, explains its director, Anna Vergés. On this basis, the institution analyses the variables that most influence gentrification processes, which are, according to Vergés, educational attainment, socio-economic status, age, housing tenure regime and property market prices associated with tourism.

For this reason, Vergés feels it is essential to improve the data on the rental offer and the rent subscribed. ‘That’s what’s most difficult to find out, how the use of housing changes, how it’s linked to tourist rental and how it’s related to changes in prices. We also need more information about vertical property ownership and transactions, to understand how the market works’, the director explains. All with the aim of collating data for the property market with socio-economic and tourist data, to see what indicators carry most weight in a region, although the study hypotheses ‘change from one area to another’.

One of the new figures the watchdog has provided is the so-called residential self-restraint rate, which reveals that most people in the Catalan capital who move stay in the same municipality. As Carles Donat, the watchdog’s Director of Projects, explains, in 2016 73% of Barcelona residents who moved house stayed within the city. In contrast, some 30,000 people left to live in other municipalities in the province, but on the other hand there were 25,000 new Barcelona residents. Although three years ago the figure was 77.6%, this moderate drop does not contradict the evidence that, according to Carles Donat, most people in Barcelona who move stay in Barcelona, as the figures have not varied much in the last 19 years.

One thought on “A pioneering study of population change”