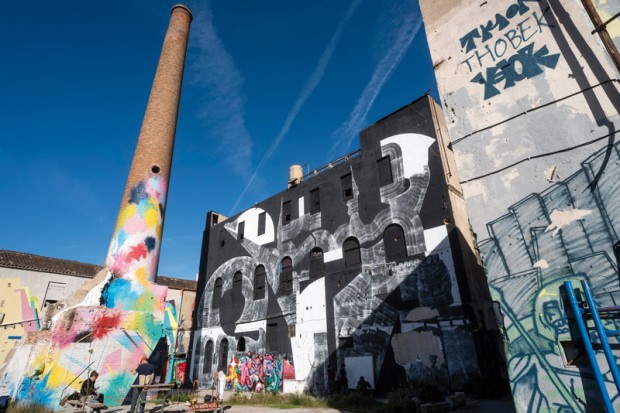 The City Council has made purchases that have turned properties threatened by the greed for real estate, like the La Escocesa industrial complex, into geographically distributed assets of the public housing stock.
Photo: Dani Codina

In Vienna, one third of housing is public, another third belongs to cooperatives and only one third is in the hands of the private market. This distribution, the result of almost one century of socially oriented housing policies, means that the Austrian capital is well protected from the phenomenon of gentrification. This is a far cry from Barcelona. With a public housing stock that barely exceeds 1% of the total, a meagre cooperativist culture and a highly deregulated property market, the Catalan capital is helpless against the storm of gentrification. At the same time, despite being a relatively small city, it has worldwide appeal. Not only is it one of Europe’s most popular tourist destinations, it is also earning a place in the club of cities attracting most congress delegates, most students on international master’s degrees, most multinational executives and most global investors.

Behind gentrification there lies the painful paradox of ‘improvement for the worse’. Or at least, urban improvements do not benefit everyone equally. While Barcelona was giving public spaces, public facilities or transport infrastructures a level of polish that opulent cities like New York, London or Paris could not afford, housing was left in the hands of the market. Under these conditions, the collective effort to renovate the public space ended up increasing the surplus value that went to property moguls, pushing rents up and driving out the working classes. Does this mean we must stop all urban improvements? That run-down, poorly equipped neighbourhoods are more inclusive? Not at all. It simply means that Barcelona’s town planning is in need of a change of paradigm. Each urban improvement initiative must come with policies that guarantee affordable housing, neighbourhood belonging and equal access to the benefits of the collective effort to improve the city. Today’s Barcelona can only aim at being like Vienna. Obviously it will be decades before it has a breakdown of ownership regimes comparable to the Austrian capital’s. But it must move in that direction and it must do so as quickly as possible. For this, it must take three courses of action we could call the ‘Viennese strategy’.

It would help a lot if the City Council had powers that are now in the hands of supra-municipal administrations. A good reform of the Llei d’arrendaments urbans (LAU, Law on Urban Rentals) would be one of the best ways to protect tenants’ roots in their neighbourhoods. The City Council coordinates with other large cities in Spain and joins them in demands to the central government for a modification of the legal framework along these lines. Among other things, we are asking for the repeal of policies that roll out a red carpet for speculators. Perks like the Golden Visa or tax exemptions for Societats Cotitzades Anònimes d’Inversió al Mercat Immobiliari (SOCIMI, Real Estate Investment Trusts) stir up the market with the large-scale influx of foreign capital and encourage the systematic emptying of buildings. Apart from the work of advice and mediation carried out by the network of housing offices and the Unitat Contra l’Exclusió Residencial (UCER, Unit Against Residential Exclusion), the law as its stands leaves the City Council with little room to take real action against the practices of vulture funds that are killing our neighbourhoods.

Fortunately, not everything is in the hands of other administrations. With the implementation of the Pla especial d’allotjaments turístics (PEUAT, Special Plan for Tourist Accommodation), the city is now well equipped to regulate this sort of accommodation. Thanks to digital platforms like Airbnb, massive growth of this phenomenon has caused uncontrolled replacement of residential use by tourist activity, perverting the balance foreseen in planning and altering neighbourhood ecosystems. Another example of regulation is the modification of the Ordenança reguladora dels procediments d’intervenció municipal en les obres (ORPIMO, Ordinance Regulating Procedures for Municipal Intervention in Building Work), which requires anyone rehabilitating a building to guarantee its occupants can remain there. Other reforms are on the way, like the rents benchmark index being prepared by the new Observatori Metropolità de l’Habitatge (O-HB, Metropolitan Housing Watchdog) and a series of partial modifications of the Pla general metropolità (MPGM, Modifications to the General Metropolitan Plan), intended to democratise the rules of the game of town planning, encourage best practices and put an end to the impunity of those who see the city as a game of Monopoly.

Bringing the proportion of public housing in line with the European normal will take an immense, continued effort. On this front it would also help if we could count on the support of the Generalitat and the Spanish government. Since 1978, the way public spending has been shared between central government, autonomous communities and local authorities has left the last of these with a quota of approximately 15% –in Denmark, local authorities have 50%. Even so, right now the City Council is devoting far more funds to promoting public housing than the Generalitat and the State put together. We need a commitment on the part of the different administrations to substantially increase the resources assigned to public housing. We need to nurture the idea that, just like health, education or public transport, public rented housing is an essential service that must be universalised so that it is not aimed only at social emergencies but is also accessible to the middle classes.

But promotion of public housing must not be a merely quantitative issue. We need a qualitative appraisal that will allow a well-balanced geographical distribution of the public housing stock. We need to aim at goals such as ensuring that all of Barcelona’s neighbourhoods have 15% of rented public housing. This is the direction taken by projects like Via Laietana 10, which will equip the El Born neighbourhood with 150 affordable housing units. Also with this object in mind, the City Council has made purchases that have turned properties threatened by the greed for real estate –numbers 7, 9 and 11 in Carrer de Lancaster, number 37 in Carrer de Leiva and the La Escocesa industrial complex– into geographically distributed assets of the public housing stock.

We need to find formulas for access to housing that are not exclusively governmental but not merely speculative either. The administration must shake off the paternalism that has led it to believe it can solve everything alone. In building the city we must count on the muscle of the small-scale association and productive fabric. For its part, the social fabric must be immunised against favouritism and populism, which are often contaminated by NIMBY attitudes. There is little the administration can do if the neighbourhood population demands public parks, facilities or car parks instead of public housing projects. At the same time, social co-production calls for the exploration of still incipient formulas which will some day have to be dominant. To give just one example, the cooperativist culture needs to be extended. The City Council has increased temporary transfers of public land to shared ownership formulas that can demonstrate their social purpose and democratic management. Nevertheless, we still need to work hard so that the more underprivileged can organise, become empowered and find fairer forms of access to housing which in other European cities are widespread. Another example of social co-production is the creation of a metropolitan operator which, with the collaboration of investors prepared to limit their profits, will promote rented accommodation at affordable prices –500 euros a month on average. Or the boost to the Consell d’Habitatge Social (CHSB, Social Housing Council), an advisory and participatory body which already brings together collectives in the organised civil society, neighbourhood associations, third sector bodies, professional associations, the different political forces on the city council and representatives of banking organisations.

Luckily, Barcelona society is living up to its famous nonconformity. The same city that in 2009 saw the birth of the Plataforma d’Afectats per la Hipoteca (PAH, Platform for People Affected by Mortgages) is still organising around new movements determined to stand up to gentrification. Movements like the Sindicat de Barri del Poble-sec (Poble-sec Neighourhood Union), Fem Sant Antoni (Let’s Make Sant Antoni), or Resistim al Gòtic (Resist in the Gothic Quarter) fight a daily struggle on the street to prevent the endangered neighbourhood community from being abandoned or sliding into frustration. On a general level, the birth of the Sindicat de Llogaters (Tenants’ Union) is great news, worthy of a city that is not used to waiting for its rights to be handed down from above. The public administration must be worthy of these emerging movements. We must appeal to all the stakeholders involved: supra-municipal administrations and other local authorities within the metropolitan area, the different political forces in the municipal council, organised civil society, economic agents and private citizens. We need an agreement to defend Barcelona’s neighbourhood. We must defend the Barcelona of the neighbourhoods.