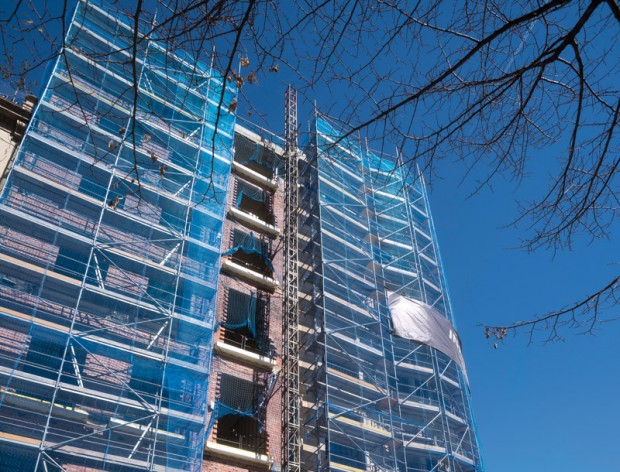 Housing is at once an essential right and the most important productive factor in the economy.
Photo: Dani Codina

Housing is at once an essential right and the most important productive factor in the economy. It has a direct influence on the economy through the building sector, which accounts for 5.6% of Spain’s GDP, and an indirect influence through the tourist sector, which accounts for 13% of GDP. There is obviously tension between those who aspire to a right included at the peak of our legal system (Article 25 of the Universal Declaration of Human Rights, Article 47 of the Spanish Constitution and Article 26 of the Catalan Statute of Autonomy) and those who look on housing as a profitable investment.

Currently, the dominant conception of housing is exclusively as a productive factor thanks to the adaptation of certain laws, like the reformed Law of Urban Rentals. Despite this, there are laws that guarantee access to housing as a basic right over any other and that give the public administration ample means for acting. These rules allow it to intervene in the property market to avoid speculation, guarantee that urban surplus value is not pocketed by the highest incomes and even protect rent controls in those cases in which absence of regulation would endanger the model of urban growth foreseen in town planning and the law. Let us look at some of these laws.

The cheapest and most sought-after properties in Barcelona are run-down buildings or housing occupied under long-term rental. The highest return these properties can give are obtained by emptying them and rehabilitating them as cheaply as possible and subsequently increasing the price asked for them (from sales or high rents). Investors are looking for a type of inhabitant (client) who can pay the highest price, a profile that does not match the neighbourhoods’ traditional resident, whose purchasing power is usually limited or grows less than the cost of housing. The people who can afford the new prices are replacement inhabitants the real estate investor seeks out for their income, without caring whether they are national or foreign, fixed or floating. Emptying a building is therefore a prime gentrifying factor, along with increasing rents.

The public administration must avoid expulsions. Our regulations allow us to oppose them by prohibiting the sale of buildings in the worst conditions through the procedure of declaring them slums if they fail to guarantee minimum living conditions, which are obligatory under Decree 141/2012. The regulations it provides for declaring a building a slum include Article 3 of Law 18/2007 on the right to housing and Article 2 of the Royal Legislative Decree 7/2015 approving the revised Law on Land and Urban Rehabilitation.

Having declared a property a slum, in the worst cases of lack of upkeep, the sale, rental or transfer of the building must be prohibited, a measure expressly foreseen in Article 44 of the Law on the Right to Housing. In this way, by applying the regulations, the public administration can avoid the main cause of gentrification: the purchase of property at a low price.

Of course, these run-down buildings will have to be brought in line with the minimum requirements of habitability and the administration will have to demand that the owner carries out this refurbishment. This obligation arises from the social purpose of property, as laid down in Article 33 of the Constitution and Articles 5 and 30 of the Law on the Right to Housing.

The obligation to rehabilitate buildings is another measure for reducing expulsions. The administration can not issue any permission for rehabilitation until temporary rehousing of the legal inhabitants of the building and their subsequent return has been guaranteed, as laid down in Article 34 of the Law on the Right to Housing and Articles 18 and 19 of Legislative Decree 7/2015 mentioned above.

The buildings must therefore be rehabilitated before they are sold, which increases the cost of their sale. This reduces the profit margin on real estate investments, and this margin is reduced even more if the buildings can not easily be emptied of their legal occupiers, who will have the right to return after the rehabilitation, thus reducing the commercial expectations. These measures means we can normalise investments and restore balance to the property market, normalise rents and make them more accessible to everyone.

There are other legal measures aimed at controlling the market, such as those intended to guarantee that the surplus value arising from public improvements returns to society as a whole and those that make it possible to limit rentals in cases where setting them freely would endanger the city’s town-planning model.