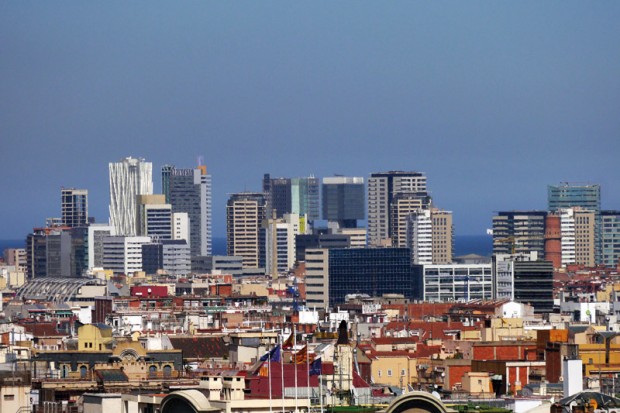 Two juxtaposed Barcelonas: in the background, Diagonal Mar, built in the last years of the 20th century at the same time as other urban and economic development areas like the neighbouring 22@ technology district, and in the foreground the city in the first half of the same century.
Photo: Vicente Zambrano

In a chapter called ‘Fizbo’ in the American television series Modern Family –a portrait of family roles in American society, made up as progressive-minded but tightly subjected to order–, the character Phil Dunphy (nuclear family head and real-estate agent), talking directly into the camera, thereby demolishing the fourth wall, says ‘I am brave. Roller coasters? Love ’em. Scary movies? I’ve seen Ghostbusters like 7 times. I regularly drive through neighborhoods that have only recently been gentrified. So yeah I am pretty much not afraid of anything.’ Over and above the obvious element of comedy in his words, the reference to ‘gentrification’ is ideologically significant. Dunphy isn’t afraid of driving (not walking, driving, with the windows of his SUV rolled up) through a still stigmatised area that has only just been gentrified (aburguesada, according to the subtitles provided for the chapter by the Neox channel), which we understand to mean rescued, revitalised, regenerated.

Gentrification is a term derived from the root ‘gentry’ (the social class just below the British nobility). It was first used by the sociologist Ruth Glass in 1964 to refer to the influx of middle-class households, many of them returning from the suburbs, to inner London working-class neighbourhoods. Gentrification is therefore a process by which a neighbourhood replaces the population inhabiting and using it with another social group, with higher purchasing power, who will inhabit it and use it, bringing about a change in its appearance and in the businesses that sustain the neighbourhood itself. However, this definition sounds very neutral and gentrification, far from being neutral, is in fact a process that is defined in terms of class and therefore of conflict. José Mansilla, an anthropologist and member of the Observatori d’Antropologia del Conflicte Urbà (OACU, Anthropology of Urban Conflict Observatory), says ‘The intention, sometimes by action and sometimes by omission, is that neighbourhoods should change and that they should do so to attract social groups with ever greater purchasing power’.

As far as Phil Dunphy’s interests are concerned, gentrification has positive effects. The same goes for large investors, who make large amounts of money, and even for the new residents, who benefit through identity distinction, as the authors of First we take Manhattan. La destrucción creativa de las ciudades (ed. Catarata, 2016) explain. And I reproduce a quote the authors themselves (Daniel Sorando and Álvaro Arduna) use: ‘One’s residence is a crucial, possibly the crucial identifier of who you are.’ (Savage et al., 2005: 207). Would you like to live in Gràcia or in up-and-coming Sant Antoni? Normal, it’s cool. Are you cool?

Gentrification processes, though, are very costly for the traditional residents. In the best of cases they stay in the neighbourhood, but facing more expensive rental contracts. From 2013 to 2017 the average rent in Barcelona went up by 27%. In some neighbourhoods, more than 60%. If they can’t stay, they leave quietly in what Irene Sabaté, spokesperson for the Sindicat de Llogaters (Tenants’ Union), calls ‘invisible repossessions’. A lot of them moved to the outskirts, but prices have skyrocketed there as well: ‘This is now a metropolitan problem and it affects municipalities like L’Hospitalet de Llobregat’. Because of its proximity to FC Barcelona’s football ground and the arrival of the L9 metro, some of the magazines that point out how fashionable the working-class neighbourhood of Collblanc in L’Hospitalet has become have renamed it ‘Coolblanc’.

In First we take Manhattan. La destrucción creativa de las ciudades, gentrification, this process of creative destruction, is broken down into four stages, namely neglect, stigmatisation, regeneration and mercantilisation: ‘An urban intervention that is usually accompanied by a low-intensity war against the poor’, we read in the book. To follow these four stages, we can look at the example of the Barri Xino/Raval. The neglect begins when a historical neighbourhood like this gets progressively run-down for lack of sufficient upkeep or services on the part of the administration. Some of the resident population gives up and leaves for other neighbourhoods in the city which, while not so cheap, do perhaps have more conveniences to offer. Neglect is followed by stigma, the underclass is demonised, neighbourhoods are reviled as ghettoes and the blame is put on the poor. Empty homes are gradually occupied by social groups of very limited means, who while lacking in income do lead and capitalise on urban struggle to demand better living conditions.

This is the moment (when prices reach rock-bottom) for buying cheaply. Homes still empty from the period of neglect begin to be repopulated by social groups with higher incomes. The ‘regeneration’ begins. This urban investment (which was often public) isn’t used to rehabilitate the most run-down properties and improve the standard of living of their inhabitants (a lift in that 1900 building would have helped people, often women, old people and dependants, the worst affected by gentrification); the money is used to open up the Rambla del Raval (changing the name of the neighbourhood was a good move), or to introduce the Filmoteca or to give the commercial fabric a facelift by opening cupcake shops. All of this eventually pushes up the cost of living in the neighbourhood and the original residents can no longer afford either the increased rent or the price of a loaf of bread (which they can no longer buy at their usual baker’s, but in the pretty cupcake shop or in the latest franchise). Now El Raval is a multiculti place and very ‘in’, where the original residents have to get ‘out’ and the investor who bought cheaply now sells for a fortune.

Starting gentrification is very easy and there’s no need for real-estate speculation to take place. A new metro station or green zone, or simply cheaper rents than in the next neighbourhood can attract new inhabitants with more purchasing power. So is any investment or regeneration potentially the beginning of gentrification? For José Mansilla, it is: ‘Though it doesn’t have to be, so long as the population already living in the area where capital is being invested is protected.’ That calls for longer rental agreements, with measures to protect tenants and more public housing stock.

Without control of rents and public land, the fight by local authorities seems to be reduced to creating intercity networks in support of reversing the situation and demands to government bodies above the local authorities for reforms and new powers. Mansilla, at the OACU, is in no doubt as to how to act: ‘The best way to avoid gentrification is to make sure that people can stay in their home and that they aren’t afraid of being thrown out.’

According to data published by the Plataforma d’Afectats per la Hipoteca (PAH, Platform for People Affected by Mortgages), in Barcelona in the last three years there have been 12,322 evictions, 84% of which directly related to rents. With a public housing stock between 1% and 2%, Barcelona has great difficulty rehousing these residents. The Sindicat de Llogaters is fighting to create awareness as a collective rental subject which, regardless of background, residence and the particular problem, gathers all the struggles and demands of tenants in the city and the metropolitan area.

Irene Sabaté accepts that, although rents go up more in working-class neighbourhoods (where they were lower), gentrification can be clearly seen in the area of the Sant Antoni market, in some parts of Poble-sec, in relation to the changes planned for El Paral·lel, in Esquerra de l’Eixample, with the closure of the Model prison (prices shot up when it was announced), and in Poblenou, as a result of the 22@ technology district and pressure from tourism, as well as the classic case of Ciutat Vella.’ When asked, anthropologist José Mansilla leaves no room for doubt: ‘The whole of Barcelona. The capitalist dynamics of constantly moving values means that the whole city is affected or could be in the short term. This isn’t going to stop…’

Returning to First we take Manhattan, ‘In few processes are the principles of neoliberalism as eloquent as here [in gentrification]’. These policies have been in place in the cities for decades and have transformed spaces for socialising (‘gentrification erodes social life’, says Irene Sabaté), which have been taken over by market practices. It degrades, buys cheaply, invests public money, attracts social groups with more dosh, drives out the poor residents and sells at a high price. Faced with this outlook, there is a resurgence (or a call to a resurgence) of that reviled neighbourhood identity and its unique role as an underclass. Gentrification is as much a global problem as it is a local tale of urban warfare.