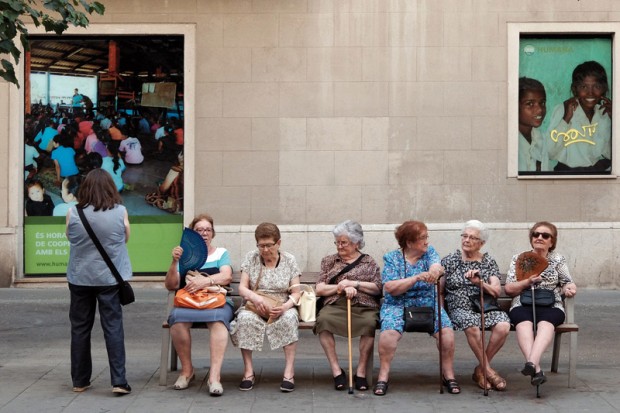 The housing tension in cities gets more and more violent and this violence makes itself felt most among socially and economically more vulnerable people. If to any indicator of vulnerability we add female gender, we reach the very top of the vulnerability ranking.
Photo: Vicente Zambrano

Gentrification is a tsunami that ravages cities and drives out the resident population, thereby reshaping lives, relations and pre-existing socio-economic and cultural dynamics. It changes the type of people and therefore also the way the city is used, and it can also have an even more predatory effect and turn it into a desert.

The main factors of this tsunami are rooted in the economy and their effects on the urban structure reach even the strongest economies. Gentrification is the consequence of different extractive activities of tourism and of what is known as the ‘box effect’: investments on a global scale target housing instead of financial assets, which changes the way housing is used or leaves it empty. Gentrification is also a consequence of surplus value awarded to owners in the neighbourhoods where urban improvements have been made with public money, thus allowing higher rents, and this affects both housing and business. The beneficiaries of this gentrification try to get the greatest financial return from the city directly or indirectly.

Gentrification works centrifugally: it eliminates the densest particles from the centre, the economically most fragile people. As the centrifuge speeds up, it completely dissociates the ‘liquids’ – the people – from the ‘solids’ – the built city. This effect collides head-on with the dominant universal demographic trend of living in large cities and leaving the countryside. As a result, the housing tension in cities gets more and more violent.

The violence has a greater impact on socially and economically more vulnerable people. Socially, because without a safety net (friends, neighbours and/or family) the risk of being driven out of the city increases, and economically, because the limited resources make it impossible to stay.

If to any indicator of vulnerability we add female gender, we reach the ‘top ten’ in the vulnerability ranking. Why? Because women are presumed to have two biological conditions that determine their social role. The first, inevitable, condition in the construction of a woman is submission. In the words of Virginie Despentes in King Kong Theory, ‘femininity is the art of teaching girls to be submissive’, to wait instead of asking. And the second condition, which is easier to escape from, is that of the ‘perfect carer’; women are assumed to have an innate caring ability. One condition is intrinsically tied to the other, because without being submissive and devoted to others we can not be the best carers.

On the basis of the social role bestowed on women as carers, the personal financial situation that shapes up for the female gender is more fragile. The labour market penalises this social attribution in four ways: establishing lower pay for women for the same job (the pay gap), imposing part-time jobs so that they can devote themselves to caring, promoting their disappearance from the top of the career ladder and fomenting their intermittency in professional life. In other words, the fact that women are in charge of reproductive work and caring for old people means that they are constantly moving in and out of the labour market.

These conditions generate a precariousness that gets even worse with retirement. Less social security payments, added to the discontinuity of their working life, mean that contributions-based benefits are much lower for women. The gender pensions gap is wider than the pay gap. Gentrification therefore has a considerable impact on women over 65, as is shown in the Estudi sobre la feminització de la pobresa a Catalunya de 2007 (‘A Study of the Feminisation of Poverty in Catalonia in 2007’), by Comissions Obreres (Workers’ Commissions).

Another phenomenon that is growing and that makes women’s position more precarious are single-parent family structures. Eighty-one percent of Spanish single-parent homes are headed by women. Single-parenthood is an indicator of vulnerability, as homes with dependent people cared for by a single adult run a greater risk of facing situations of hardship or emotional conflict due to the increased difficulty of reconciling professional and caring work.

For all these reasons, then, women suffer more as a result of the real-estate violence generated by gentrification. We must demand a lot of changes across the board. In order to tackle real-estate violence, what is needed is, first of all, public regulation of the property market to include gender as an indicator of vulnerability. Secondly, we need to change the laws on employment and pension matters so that reproductive and care work are remunerated or else bring about a solid, egalitarian public structure to support them. The fourth leg of the welfare state that the Law on Dependence was supposed to provide perpetuates female and male symbolic social models.

Care and reproductive work, which has traditionally been handled by women, is supported thanks to an informal caring network built up between them. This solidarity network is forged out of subsistence links between the people in the neighbourhood, the market, shops, school and the building where they live. If gentrification does away with these customs and these relationships, it destroys the links of solidarity and the result is that reproducing and caring have to be carried out unaided. Without the fourth leg of the welfare state and because of the destruction of this solidarity network, the city becomes a setting fit only for economically productive activities. What is needed, then, in the fight against the individualising violence of gentrification, is for people and all their needs to be placed at the centre of city decisions.

This city that is being turned into a desert, stripped not just of people, but of the links that give it its quality, has a direct effect on the physical freedom of women. The city that loses residents and local trade – in short, the network of people who mesh together, who know one another and who therefore care for each other – exposes them to a scenario that is blinder, dumber and darker, where as women they have a greater chance of being assaulted, or, at least, of feeling more fragile, more unsafe, and of being deprived of the public space.

Every twelve hours a sexual assault with violence or intimidation is reported. More than 90% of the people who suffer this violence are women, most of them young and 22% minors, according to figures in the Generalitat’s (Catalan Government) Balanç de seguretat i activitat policial (‘Summary of safety and police activity’) published by the Mossos d’Esquadra (Catalan police) in 2016. Mixing users and detemporalising public space help to reduce gender violence. In strategies against gentrification, it’s important to identify what uses are allowed in the city so as to have as wide as possible a temporal cover and favour the greatest possible diversity of users.

Any policy or government action to intervene in the process of degentrification must be implemented with measures that take into account the more fragile layers of society. It must safeguard equal rights and opportunities, which women per se lack. Any city wanting to fight against gentrification must fight against real-estate violence, individualising violence and gender violence in order to build a better city for all.