A number of municipalities engaged in greening trajectories have created new inequities or even exacerbated old ones. How can the unwanted and unequal impacts of green planning be addressed? 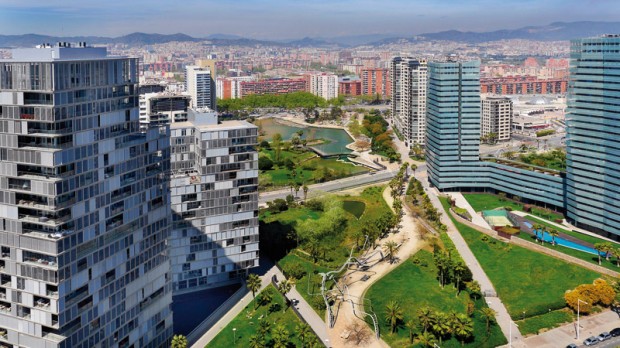 Diagonal Mar park, one of the green zones newly created in an urban and economic development area of post-Olympic Barcelona.
Photo: Vicente Zambrano

It is well known that green spaces contribute to improved physical health by encouraging active lifestyles and creating conditions that reduce disease associated with air pollution and noise. Residents exposed to green space have also a lower likelihood of being in poor mental health and higher opportunities for building social connections and personal ties. From an environmental standpoint, urban green spaces increase biodiversity, improve storm water absorption, reduce urban heat island effects, and regulate emissions. In Barcelona, urban forests remove over 300 tons of air pollutants every year and prevent 5,000 tons of CO2 from being released into the atmosphere.

Yet, in many large cities around the world, the public and private investors that promote the environmental, socio-economic and health benefits of urban greening projects often hide the highly inequitable outcomes of these initiatives, which often include gentrification and displacement of residents. Under the banners of sustainability, resilience and climate adaptation, a number of municipalities engaged in greening trajectories, instead of solving problems, have created new inequities or even exacerbated old ones.

In a recent article citing New York’s High Line, a former elevated railroad transformed into a large urban areal park now visited by 5 million people each year, as the most famous example of this phenomenon, Scott Kratz, project director of Washington D.C.’s 11th Street Bridge Park, expressed concerns early on over the social impacts of the new highway-bridge-cum-park. “Who is this really for?” he asks himself.  The question is a crucial one. Who are the real targets and beneficiaries of new or restored green amenities in cities?

As exemplified by the aforementioned High Line, many new parks have ultimately catered to white and socially-privileged residents and tourists. This green transformation has been followed by spikes in local property values and by the displacement of nearby businesses and working-class-residents, pushed out by rising rental prices. Between 2003 and 2011, property values near the High Line went up by 103%, and  penthouses designed by Zaha Hadid’s studio currently go for $50 million.

From marginalisation to privilege

Since the XIXth century, urban greening projects such as parks, gardens, greenways and ecological corridors have been promoted as motors of beautification, improved health outcomes, neighborhood revitalization, and residential well-being. We can think here of projects such as the Emerald Necklace in Boston or the Parc de la Ciutadella in Barcelona. Yet we can observe a significant shift in green urban planning –from the original socially-oriented goals of the XIXth and early XXth century, to community-oriented greening of the 1970s and 1980s aimed at reclaiming neighborhoods, toward, most recently, a development-oriented greening aimed at attracting high-end amenities that cater to service industries, technology districts, privileged residents and tourists.

Recent research at the Barcelona Lab for Urban Environmental Justice and Sustainability(Laboratori de Barcelona sobre Justícia i Sostenibilitat Ambiental Urbana – BCNUEJ) has found evidence of this in various cities across the globe. In Barcelona, one study finds clear green gentrification trends in several historically underserved areas, especially old industrial neighborhoods. In the Sant Martí district, for instance, the percentage of residents holding a bachelor’s degree or higher increased by nearly 28% on average around a new local park, versus only a 7.6% increase for the district as a whole over a period of 10 years. Several parks in the Sant Martí and Ciutat Vella districts including the Poblenou and the Port Olímpic parks experienced strong environmental gentrification. The Príncep de Girona Gardens in the southern area of the Horta-Guinardó district and the Diagonal Mar park in Sant Marti also experienced rather strong environmental gentrification. There is here a clear relationship between new green space and attraction of higher-educated residents, although some districts in the City, including Nou Barris and Sant Andreu, have not seen green gentrification trends.

Such far-reaching dynamics raise questions when it comes to creating livable, healthy, and equitable cities. As planners, public officials, and civil society work to improve urban environmental quality for socially-vulnerable residents, they are increasingly faced with the possible inequitable outcomes associated with greening projects. The land revaluation and displacement that often results from greening has been defined as ‘green gentrification’ or ‘ecological gentrification,’ in which gentrification is characterized by the social erasure of residential practices as well as by real physical displacement. In Barcelona, sustainable mobility projects such as the Superilles (super-blocks), especially the Sant Antoni Superilla, have already raised concerns over the mid- and long-term impacts of the new project on housing and commercial affordability, although gentrification there is also fueled by the new market inauguration.

In sum: To what extent do different green planning interventions translate into a green space paradox in different cities and what are their implications for long-term marginalized urban residents? To be clear, I do not argue that planners intentionally target low-income neighborhoods and communities of color in order to profit developers and exclude vulnerable residents from the benefits of green projects. Research points to the fact that planners are more likely to neglect the impacts of their plans on the exchange values of real estate and that they are often imprisoned in a logic of competitive urbanism and city rebranding even if they are becoming increasingly aware of the inequitable impacts of green planning. In Barcelona, the government of Ada Colau is well aware of possible negative impacts of gentrification of new livability interventions and is working in a cross-sectoral way to evaluate the scope gentrification might take and to create new tools and regulations to protect residents.

In general, the answer does not lie in avoiding low-income neighborhoods or communities of color as places for urban greening projects. Such decisions would further exclude historically marginalized groups from the benefits of greening and concentrate green or sustainability investment in richer neighborhoods. The question and challenge thus becomes: How can cities craft regulations, policies, planning schemes, funding mechanisms, and partnerships –and at which levels– that can address the unwanted and unequal impacts of green planning? In short, greening for whom, at which (and whose) price, and how?

Many believe that lasting solutions to address urban green inequities and green gentrification reside in changing the ownership of land in cities so that its speculative and market function gets taken out of the picture. This means developing tools such as Community Land Trusts or Mutual Housing Associations, which are increasingly relevant policy tools used to address gentrification. Protecting and further developing social housing and public housing is also an obvious commitment needed to mitigate the risks of displacement increasingly associated with large scale urban greening projects such as greenways. Zooming in on the greening projects themselves, smaller-scale projects focused on the needs, preferences, and multiple uses of local residents also have the potential to help ensure community ownership and stewardship –rather than appropriation by visitors and tourists, as The High Line exemplifies.