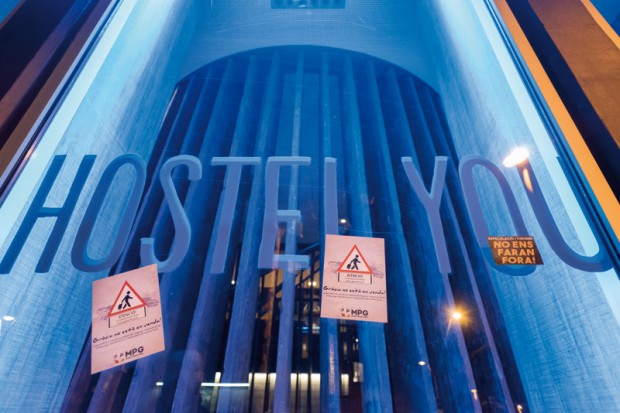 Protest posters with the words ‘They won’t drive us out because of tourism’, outside an establishment belonging to the Generator chain of hostels in Carrer de Còrcega, in Gràcia.
Photo: Dani Codina

Barcelona has become a tourist city in a very few years. With constant growth in the number of tourists since the beginning of the nineties, it has gone from accommodating a million-odd visitors to today’s 17 million. The political wager for positioning itself as an urban resort, the increase in the passenger capacity of the airport and port, the constant increase and diversification in the offer in tourist accommodation and the specialisation of central areas in the so-called ‘visitor economy’ have profoundly reshaped the city.

Today Barcelona can not be understood without taking into account the power of tourist activities to bring change. At the same time, tourist activities emerge through the material and symbolic construction of the city. A relationship that is especially obvious today but that has been part of Barcelona’s construction through the ages and that has become one of the cornerstones of the pre- and post-Olympic urban project.

For years tourism was seen only as one of the factors in the success of the city’s post-industrial conversion because of its capacity for creating wealth and jobs, especially at times of crisis. Today, however, tourism is also a source of conflict and controversy. The social malaise attributed to tourism is not just a passing upheaval in one specific part of the city, but something that has grown in recent years to the point where, in a survey in early 2017, it appears as the most serious problem. In the framework of demands for the right to the city, public debate has grown up around tourism gentrification, denouncing the expulsion of residents (mainly a result of increased rents), the replacement of the commercial fabric and the overcrowding of the urban space and the barriers to the reproduction of everyday life in the neighbourhoods.

Gentrification and tourism are mutually constituted phenomena. Gentrified neighbourhoods are an object of desire for many tourists and, at the same time, the presence of tourism reinforces gentrification processes. Far from being a seasonal phenomenon located in specific spaces, tourism competes for resources with the other citizens –streets and squares, city services, housing, transport–, eventually leading to the displacement of the resident population. There follow five key issues that help to understand the relationship between the rise of tourism and gentrification processes.

First of all, we need to focus on the generation and appropriation of the difference in the return from urban land as a result of the intensive use of the city made by tourist activities. With an average stay of five days and an estimated expenditure on accommodation of €60.70 a night, it is plain to see that the return from real estate used for activities aimed at satisfying the demands of visitors is much higher than that from real estate for use by the resident population. This difference is key to understanding the city’s specialisation in tourism, both as regards the replacement of long-term rentals by short-term or tourist lets –with or without a licence– and as regards the conversion of whole buildings into hotels or other types of tourist accommodation, especially in the city’s central areas –Ciutat Vella, Eixample, Vila de Gràcia– or in areas undergoing transformation, the case of Poblenou.

Secondly, we need to act on the type of consumption and the way space is used by the millions of tourists who visit the city. Tourists’ high expenditure –an average of 350 euros per person during their five-day stay, not including outward and return travel or accommodation– points to one of the key reasons why many services and commercial activities are directed at the visitor economy. Add to this the fact that the visit is concentrated mainly at the destination –where attractions and accommodation are located, but also where we find the icons that reproduce the image and the brand–, and we get considerable pressure on certain parts of the city, where tourism becomes the hegemonic activity. This pressure endangers the survival of the everyday life of the resident population, especially those people who are least able to keep alive the low-intensity demand which answers to basic shopping and social assistance needs. 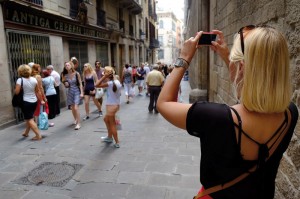 Thirdly, the power of tourism to set off gentrification processes is not only due to the increase in the tourist demand, but is also a result of a more or less deliberate process of material and symbolic city construction. One of the central factors in the development of renovation policies affecting the historic centre or the large urban transformation projects has been tourism: Ciutat Vella, the 22@ district, Poblenou, the area around the Fòrum and the Port Vell Marina, among others.

Fourthly, we need to bear in mind that gentrification and tourism are both global processes that are driven by a twofold interrelated process of production and consumption of resources on a planetary scale. In this respect, it is worth taking into account the part played by the port and airport complex as a node in an international transport network which is not governed from Barcelona, the process of global financialisation of the real estate market, which is especially felt in the tourist accommodation sector, and the emergence of new formulas for marketing holiday lets through digital platforms that make it possible to sidestep town-planning regulations and have an obvious effect on the residential market, among others.

A legal framework that feeds speculation

Finally, it’s worth remembering that the Catalan, Spanish and European legal frameworks feed the speculative avalanche –use of buildings for tourism is not exempted– and limit administrative measures intended to manage it. The various Catalan laws that transpose the European Services Directive modify the Llei del dret a l’habitatge (Law on the Right to Housing) to allow the inclusion of economic activities –among them, accommodation for tourist use– and the Llei d’urbanisme (Law on Town Planning) stands in the way of preventive regulation of those commercial activities considered ‘harmless’ –tourist accommodation, restaurants, souvenir shops and others– and weakens key instruments such as special urban planning to regulate spectator events. There are also measures to foment the appropriation of surplus value on consolidated urban land through building rehabilitation and renovation, drastic reductions in taxes on real estate transactions –with the subsequent increase in profitability– thanks to the establishment of Societats Cotitzades Anònimes d’Inversió al Mercat Immobiliari (SOCIMI, Real Estate Investment Trusts) and the shortening of rental agreements following the Llei d’arrendaments urbanes (Law on Urban Rentals), which pushes prices up and leaves tenants less protected.

Faced with this complex scenario, the City Council is taking a firm stand on the phenomenon despite the limited powers and policies available to it, through an all-round strategy whose object is to minimise the negative effects of tourism and strengthen community life in the most overcrowded spaces. Some of the instruments that have been implemented include regulation of accommodation licences through the Pla especial d’allotjaments turístics (PEUAT, Special Plan for Tourist Accommodation) to prevent the number of accommodation licences in the city centre growing, more inspections to put a stop to illegal holiday lets, management of tourist mobility to integrate it in everyday life, constant talks with private operators and the promotion of specific neighbourhood plans in those areas most affected.

Managing Barcelona as a tourist destination involves tackling tourism as a collective issue integrated in city processes and taking decisions that will ensure a balance so that tourism is not a threat but a great opportunity.

One thought on “() La disputa per la ciutat turística”