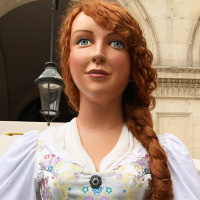 When the Nou Barris Giant Carrier Group came up with the idea of making a little giantess, they decided to follow the same criteria as they had with the giants: that the figure should represent a neighbourhood of the district. In this case the neighbourhood was to be the oldest one, Vilapicina i la Torre Llobeta.

The new little giantess, built by Jordi Grau in 2015, was given the name Eulàlia of Can Basté, Eulàlia after Santa Eulàlia de Vilapicina Sanctuary, an eighteenth century religious building, and Can Basté after the farmhouse with the same name located right next to the sanctuary, which also dates back to the eighteenth century.