The fourth Sunday after Easter

Santa Madrona is a parish church in Poble-sec, on Carrer de les Tapioles, which organises the traditional gathering in honour of the saint on the fourth Sunday after Easter.

This festive gathering is one of the few that survives in the city and it starts with a cercavila, a musical procession involving all the neighbourhood's festival figures, that sets off from Plaça de Santa Madrona and takes the participants to the saint's shrine on Montjuïc.

There the celebrations begin with a communal breakfast and mass. These are followed by activities to liven up the day for young and old alike, including the traditional tombola organised by the Esplai Xerinola, workshops and other activities for kids, and a group lunch to round the day off.

Saint Madrona's feast day is 15th March but, for weather reasons, it was decided to hold the celebration four weeks after Easter.

The Aplec de Santa Madrona is held in honour of one of the patron saints of Barcelona, the others being Santa Eulàlia and the Mare de Déu de la Mercè (Our Lady of Mercy). Legend has it that Madrona died on 15th March. So that day was chosen to pay honour her.

The Poble-sec parishes wanted to reassert Barcelona's forgotten patron saint, so some years ago they decided to organise the aplec, a gathering of pilgrims. It has not only become a regular fixture, it has gathered momentum and gradually incorporated lots of organisations, such as colles de gegants (groups of giants), children's recreation centres, and music groups. 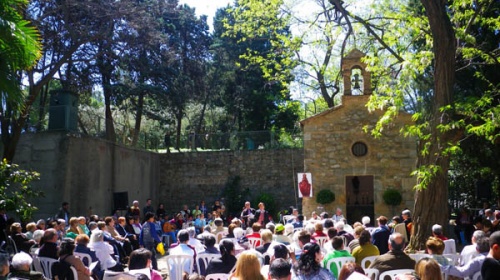 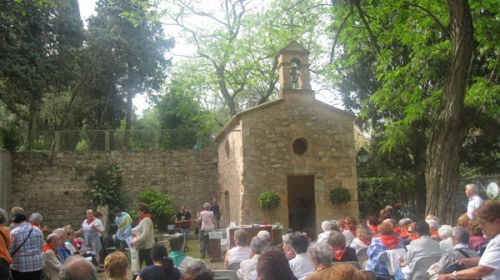 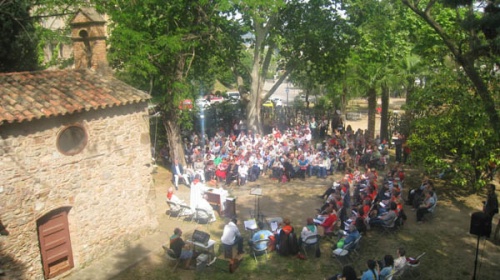 The Ermita de Santa Madrona, on Carrer de Montanyans, was documented in 1406 and considered to be one of the most important hermitages on Montjuïc at the time, because the saint's remains were kept there. However, these were burnt, along with the church furniture, during the Setmana Tràgica (Tragic Week) in 1909. These days it can only be visited once a year, for the Aplec de Santa Madrona.

Musical procession. Early in the morning a festive cercavila hosted by Poble-sec's gegants and grallers (giants and people playing the double-reeded gralla) lead the public to the Ermita de Santa Madrona, which is where all the day's events take place.

Mass. At 11 am, following the communal breakfast outside the hermitage, a mass is held in honour of the saint.

Tombola and workshops. The Poble-sec recreation centre Esplai Xerinola organises the traditional tombola, plus various activities and workshops to entertain the children.

Legend has it that Santa Madrona lived in the 3rd century in a Roman villa on Montjuïc. She was orphaned when she was very young and adopted by an uncle who lived in Rome. There she discovered Christianity and was baptised but soon she was denounced to Emperor Diocletian. She sincerely confessed her faith and, as she would not renounce it, she was condemned to die a martyr.

In 892 some Marseilles merchants bought her body and set off for home. As they passed Barcelona they hit a terrible storm that forced them to seek shelter, but as soon as they reached port, the sea became calm. When they wanted to set sail again the sea rose up, so they decided to leave Santa Madrona's remains in the city. That way the ship could continue its journey without further impediment and the saint could stay in her native land.