The Guinardó neighbourhood takes its name from the house which dominated the area in the 17th century. This building is currently the neighbourhood civic centre, the Casal d’Entitats, but the house has a long history full of stories. Until the 19th century the area was predominantly rural and full of arable fields. Little by little, single-storey houses with gardens were built. Like the majority of neighbourhoods in the district, the face of Guinardó was completely altered in the middle of the 20th century because of urban speculation and the construction of large blocks of flats.

The associations in the Guinardó neighbourhood have always been strong, and gained momentum in the 1970s. Their activity in the area can be seen in the organisation of the festa major, the main festival, which is a special commission for the neighbourhood's Coordinadora d’Entitats. There are a whole host of events aimed at all sections of the public, like sporting competitions, dances and concerts, as well as activities for older people and kids.

Originally the Guinardó festa major was held on 27th April, the feast day of Mare de Déu de Montserrat. But, for scheduling reasons and the progressive secularisation of society, it was moved to the weekend after 1st May. 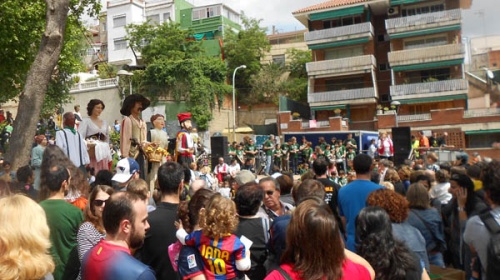 One of the capgrossos, the big-headed figures from Horta-Guinardó is dedicated to Antoni Roca, a local activist. It was made by Toni Mujal, an artist from Cardona, and was unveiled in the 1985 festa major.

Bell ringing. On the first day of the festa major, the three parish churches all ring their bells at the same time to signal the start of the celebrations. At the same time the town crier shouts his news in Passeig de Maragall, accompanied by the trabucaires firing off salutes with their blunderbusses.

Festival in the park. On the last day of the festa major, all the festivities move to the Parc del Guinardó. Throughout the day, from 9 am to 9 pm, there are shows in the streets, workshops for kids, havanera singing and community meals. All the day's popular culture activities also start and end here, like the cercavila gegantera, the procession of giants, and the correfoc, the fire run.

Matinades de trabucaires. Early in the morning on the last day of the festival, the Trabucaires d’en Perot Rocaguinarda go out with their blunderbusses and wake up the locals with their rumpus. They want to let everyone know that the big day has arrived and that all the people are invited to take part in the festival.

Cercavila procession. The Guinardó's festival giants, Joan el Portuguès and Marieta de la Font del Cuento, host the cercavila, the procession of festival figures.The little giants of Xarrac, the big-headed capgrossos, and the traditional gralla players with their drummers also all take part. The parade winds it way around the neighbourhood and ends up in the Parc del Guinardó, where festival events take place all day.

Correfoc. The devils' group the Malignes del Guinardó organise the final correfoc, or fire run, which leaves the park to make its way through the neighbourhood's most central streets. The fire and percussion show finishes in a blaze in Plaça Catalana.

Horta-Guinardó's giant represents the bandit Perot Rocaguinarda as legend says he was one of the famous people put up in Mas Guinardó. The figure and his partner, the giant washerwoman of Horta, were both made by the sculptor Xavier Jansana, in 1986.